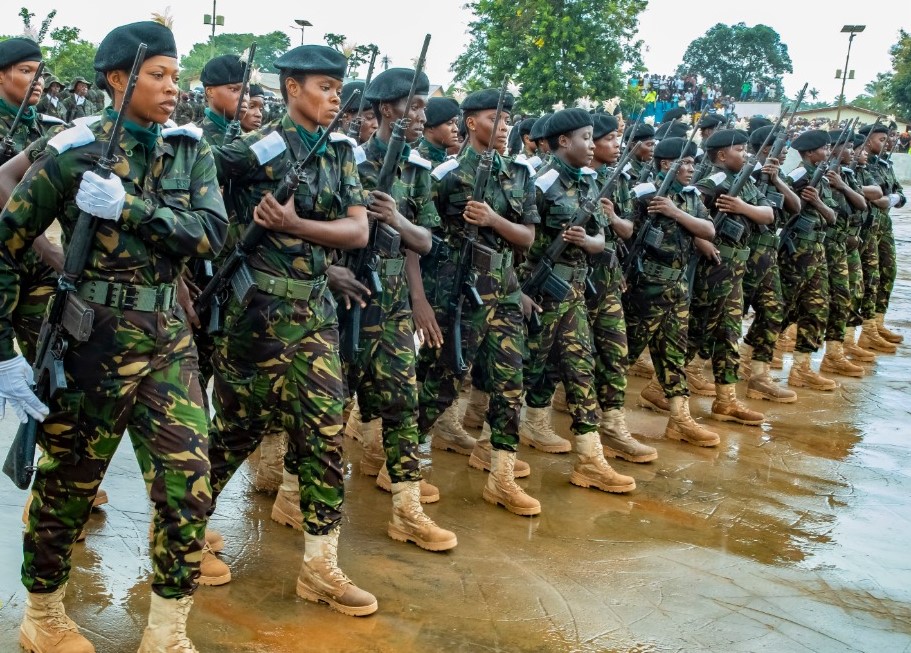 While reviewing the passing-out parade and commissioning ceremony of over 300 combined women officer cadets and recruits at the Armed Forces Training Centre, the President commended the soldiers for their resilience and tenacity but urged them not to be involved in partisan politicking or engaged in partisan political discussions.

“As professional soldiers, do not allow yourselves to be unduly influenced by politicians irrespective of your personal relationships or other unseemly affinities with them. You serve the Republic of Sierra Leone and no one individual’s personal interests or ambitions,” he said.

He added: “May I remind you also of your responsibilities. The oath of allegiance, to which you subscribed moments ago, means that you have agreed to subject yourself to public scrutiny as a soldier both on and off duty. You have sworn to respect, uphold, and protect the National Constitution of the Republic of Sierra Leone, and to obey all lawful orders from any superior placed over you without question.”

The President said that when his government, in conjunction with the United Kingdom Government and the International Security Advisory Team (ISAT), launched the Special Female Recruitment, it was because they believed that expanding the presence and role of women in the national security sector was good for national peace, cohesion, and development.

President Bio emphasised that the soldiers had indeed accomplished themselves with great distinction in training and had proven again that what men could do, women could do even better.

“As commander-in-Chief, let me formally welcome you into the Republic of Sierra Leone Armed Forces. Let me also assure you that you are coming into this noble institution at a time when there is growing opportunity for female service personnel in terms of career progression, educational development, and participation in global Peace Support Operations.

“We are also fully committed to recruiting, training, and retaining more women soldiers and we will promote women leadership within the RSLAF. We will put in place accountability mechanisms to ensure that our RSLAF pursues a progressive agenda for women and our institution will continue to evolve as we learn lessons and best practices across the globe,” he said. 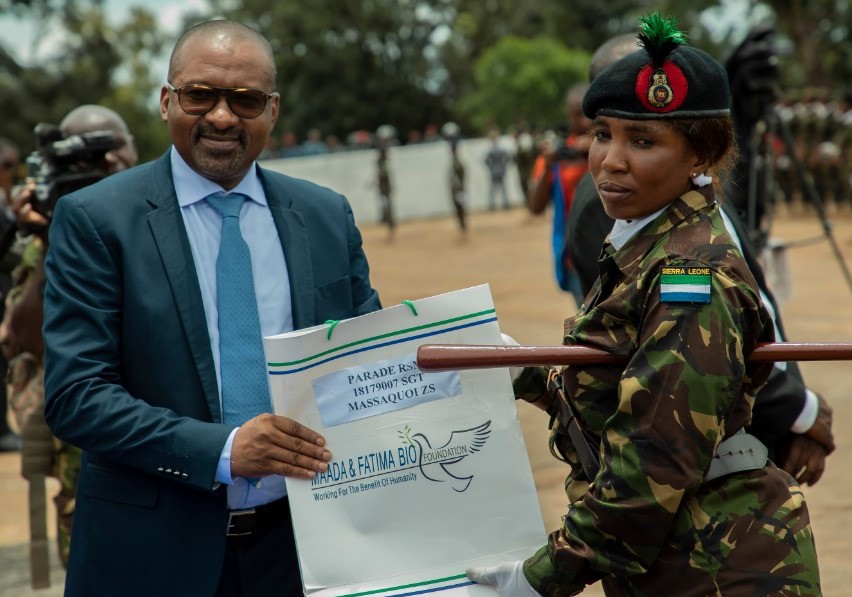 The President disclosed that since 1978 and 1979, when 10 female cadet officers and 64 recruits enlisted in the military, more women had volunteered to serve and had, over 40 years of dedicated service to country, shown an uncommon valour, courage, adaptability, selflessness, leadership, and they had carried through their pledge to defend and protect the land that they loved.

“I read out the following names with pride: Annie Monrovia, Euphemia Cole, Claudia Taylor, Mafulay Bangura, Mariatu Kamara and many others now retired. They were some of the very first women who enlisted in our military forces.

“I pronounce the following names beaming with joy: Kestoria Kabia, Memuna Koroma; June Adeola; Ursula Hanciles and many more were some of our country’s first women officer cadets.

“I call out Brigadier General Kestoria Kabia, Colonel Memuna Koroma, Colonel Annie Paris, Colonel Leona Tucker, and Colonel Agatha Sandy among many more to come. With deep pride and great appreciation, I thank you for your service, commitment, leadership and for blazing a trail for women to serve in senior command positions in our military.

“I also call out Col (Rtd) Annie Paris- Matron 34 Hospital – whose patriotic dedication to service and saving lives during the Ebola scourge earned her a Silver Medal; Sgt Musu Foday – Ambulance driver – Bronze Medal and long service and good conduct medal, who acquitted herself valiantly as a driver in the Sector Reconnaissance Company (SRC) in Sudan, during Ebola in Sierra Leone, and who continues to serve these colours with pride in the Joint Presidential Guard Force; Corporal Hannah George whose invaluable service as a nurse during Ebola earned her a Bronze Medal.

“Each of these fine women and many more whose names I have not called out today, volunteered, stood side by side with their menfolk in war and public health emergencies, and in disaster management and national development.” 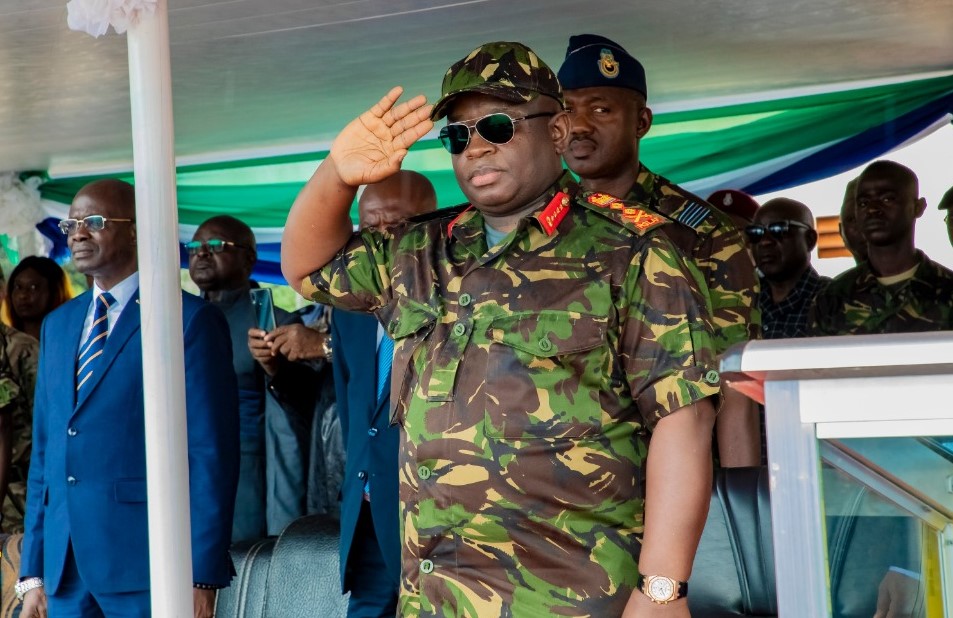 President Bio said the women had defied traditional strictures, battled against stereotypes and unequal treatment and had persevered and prevailed, adding that that was a history and tradition to be proud of.

“To you our new soldiers, you have just sworn into one of the finest military traditions and institutions – one that has hewn and shaped patriots; men and women who have fought and made the ultimate sacrifice for our nation in war and in peace. They have served selflessly from Burma to the Congo, from Timor Leste to Lebanon, Sudan, Somalia, Liberia, and in the jungles of Sierra Leone. They have stood up when it mattered; they have shed their blood when their country needed it most. They are the proud men and women of the Republic of Sierra Leone Armed Forces. Let us all continue to stand for our country’s peace, unity, freedom, and justice because we have only this one Sierra Leone.

Acting British High Commissioner to Sierra Leone, Alistair White, said after an incredibly demanding and difficult few months, he was happy to witness the passing-out ceremony of the new female recruits. He said the military was one of the links between the United Kingdom and Sierra Leone and noted that it was important that the country benefited from the capability of all its young people.

“This achievement should also be noted widely among other national and international institutions and also by the United Nations where an increasing number of women serving is recognised as critical to success,” he said.