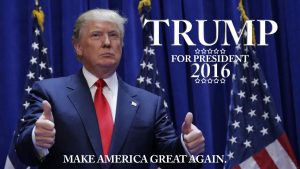 It took a while to recover from the political coma that was induced by the surprising outcome of the American Presidential elections. But now that Donald trump has been elected by the American Electoral system, it may be time for all to come together and move on. Unfortunately, the need for the country to move on as The United States of America is now weighed down by the albatross -like sense of The Disunited States of America. Many people have always looked up to the USA as the beacon of democracy, but you wonder whether that notion still holds for many; after the recent elections. My primary school Civics teacher used to tell me that in a democracy, “majority carries the vote”. In that case, we are not talking about American Democracy then.  In America, it’s the “electoral votes” that count. But what really happened with the Presidential election? It is no secret that the unexpected, or better still, the unfathomable happened. Considering that this election was a matter of choosing the one you despise less, this was any body’s game.

The Democrats are understandably reeling. Even with the unintended intervention of the FBI chief priest James Comey, they had this election nailed on; or so they thought. Thought so as well as the millions who voted for Hillary Clinton. There are many lessons to learn from this election. Notwithstanding that, it is the after birth of the elections that has kept the issue relevant at both national and international levels. Trump reminds me of Chinua Achebe’s Novel, “Things Fall Apart”, and Trump’s rise to the White House could be summed up in the prophetic, “The white man is very clever. He came quietly and peaceably with his religion. We were amused at his foolishness and allowed him to stay. Now he has won our brothers, and our clan can no longer act like one. He has put a knife on the things that held us together and we have fallen apart.”

Unlike the white man in “Things fall apart”, Trump did not come quietly. He floated the concept of hate, bigotry, misogyny, fear, paranoia, etc. on America’s social stock exchange.  Shares were bought and sold as the election gathered pace. It was billed as nothing like it; thanks to the American election being dragged into a political cesspit that made Mugabe looked like a saint. It is no wonder that by November 8th, the American electorate was suffering from a serious bout of voter apathy.  Many couldn’t wait to get it over with; irrespective of who won.  In his bid for the White House, Trump told his supporters exactly what they wanted to hear; to bash everything and anything Obama. In the process, a giant utopia was erected in the minds of “the forgotten”, who were hell bent on giving the establishment a bloody nose. And so to “the forgotten”, Trump became their Messiah overnight. He was going to take them to the Promised Land. He is one of them, he was speaking for them, he felt their pains and shared their dreams; “the ones left behind”. The irony is that Trump is not one of them and has never been. He does not belong to them and never will. From an early age, his hands were washed for him, and so he ate with kings.

But what do we know from the elections, and what has Donald Trump done for America? For starters, Trump has taken the scalpel to the entrails of the underbelly of the American society. He has exposed the deep seated chasm that has been bubbling in America. The accusations of bigotry, misogyny, hate, fear, and outright discrimination are not new to the American society. What Trump did was to put a face and add a voice to those misgivings. Many would conclude that what Trump did during the campaign was, legitimise such undesirable characteristics. I am not talking about groping.

There are a lot of his followers who don’t see anything wrong with being discriminatory now. What people used to whisper or hear around dinner tables are now the chorus at stadiums and other public places. Is it any wonder that the amount of hate crimes have spiked since his election victory? When he preached his sermon to “make America great again” to his disciples, he promised a lot of lofty ideas that bordered on the metaphysical. Unfortunately for his worshippers, it took one meeting with Obama and 72 hours later to renegade from his promises, The “wall” became “wall and fence”, the promise to real Obamacare became, “I will keep some parts of it”, deporting “11 million undocumented immigrants” morphed into “3 million drug dealers and criminals” and “crooked Hillary” was now, “they are good people, I don’t want to hurt them”.  If you ask me, I am happy that he has had some liaison with reality; because his Utopian ideology was built on quick sand.

His promise to “bring back jobs “ to the US has left many of his followers thinking that they will wake up one morning and Detroit will become the motor making giant it once was, and that Joe Bloggs in Michigan will be gainfully employed and live happy ever after. You are left to wonder what his disciples will be saying after his first 100 days as the signatory to The White House tenancy agreement.  Will he be held to ransom by these people that have been fed on the promise of the Promised Land? What will they do if he fails to build the wall, or “lock her up”? Not that I wish it. If he fails to live up to the new found American Dream,  would that mark the emergence of the 3rd party option, or would those that had deserted the Democrats come back to roost? Don’t rule out the emergence of a 3rd Party.

If Trump’s presidency is causing a lot of anxiety at home, spare a thought for the International Community. No one seems to know his foreign policy stance. At best, he has hinted on protectionists tendencies. He has threatened to tear up age old treaties and re-write the DNA of international co-operation. It is this lack of clarity about his foreign affairs, against the backdrop of his temperament and unpredictability that has left many nerves on the international landscape juddering. His bromance with Putin has been seen by many as a direct threat to America’s version of the New World order. Most of the people that have been touted as possible members of his cabinet are not travelling light. There is a lot of historical baggage following some of them. And this has left a lot to be desired for many people.

The disappointment of Democrats and many more at home and abroad is understandable. I see Trump’s victory as divine intervention and God’s way of saying, “America must go on”. In the Red corner, the Democrats conducted comparatively peaceful election rallies; not including the primaries. Clinton said that she will accept the election results; and she did, grudgingly gracefully. In the Blue corner, let us think of the fact that Trump’s disciples supported him with religious fervour. His rallies were punctuated with violence that he seemingly supported and sometimes encouraged when protesters gate crashed them. Trump told the world that he will only accept the elections results “if I win”; the same election process that he brought into disrepute by describing it as “rigged against him”.  Even when the Democrats lost and gracefully accepted the outcome, it has not stopped protests and sometimes violent protests on the streets. Now sit back and picture what it would have been like, if Clinton had WON? Now you know that the God we serve is a kind God.

Politics has a way of fooling people. Take a look at the pollsters who got it catastrophically wrong. Trump’s presidency has already had its obituary written. There are some who believe that America will become a failed state (a term that America uses for countries that don’t agree with it) under Donald Trump. To all intents and purposes, Donald Trump might just be one of the best Presidents that America ever had. And why are you laughing?  Politics has a way of making chameleons out of people. Remember when Obama said in 2004 that “marriage is something sanctified between a man and a woman.” “Remember when Hillary Clinton said in Australia in 2012. that “This TPP sets the gold standard in trade agreements to open free, transparent, fair trade, the kind of environment that has the rule of law and a level playing field,”?

Keep calm. Just because your party lost, does not mean that the average American voter would need adult supervision the next time he/she goes to the polling booth in four years’ time.