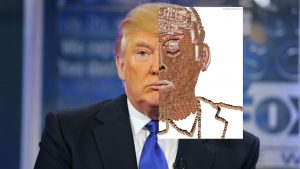 In September David Brady and Douglas Rivers of the Hoover Institution took a closer look at the demographics of Mr Trump’s enduring coalition. They painted a picture of Trump supporters as largely older, less wealthy and less educated. They found that more than half of Trump-backers are female. About a third is over the age of 65. Only 2% are younger than 30. Half of his voters have a high-school diploma, but just 19% have a college degree. Just over a third earns less than $50,000, while 11% make six figures or more. Ideologically, Mr Trump’s people are all over the board, with 20% identifying as moderate, 65% as conservative and 13% as very conservative. When the New Yorker entered the race, he pulled support from nearly every candidate in the field. (BBC, 10/12/15). In my book, that sounds like an angry mob. It is therefore not surprising that throughout his campaign, Donald Trump has been appealing to the base instincts of American society.

Like him or loathe him, many republican supporters have sided with him because, they believe that he says exactly what he thinks. Many see him as unconventional in his approach to politics. Since 9/11, the American psyche has been rightly or wrongly saddled with paranoia. There are a lot of people who are unhappy with the status quo for various reasons. It is no wonder that Trump has opted to tap into the general disgruntlement that seems to pervade the American political landscape. . It would make everyone’s lives easier if those fears were purely irrational, just a matter of bigotry and anxiety about a changing world. And some of them are. But some of them are understandable and reasonable, the kind of fears that politicians and political parties are supposed to address. This is where Trump might be gaining his loyalty from. But as he keeps lurching from one controversy to another, Trump’s popularity seems to gather pace; at face value. The question is, for how long will it last?

There is no doubt that the Democrats will like to see Trump win the Republican nomination, which will ensure a shoe in for Hilary Clinton as the Democratic candidate. Trump has been hugging the headlines and that seems to have deflected any criticisms that were lined up against Clinton. His controversial blabbing has made sure that the Democrats have enjoyed a silent campaign session. If Trump was to win the Republican Party nomination, the democrats would have a field day. Or so they hope.

Trump may divide opinion along the political landscape but he has already stacked up a lot of reasons why his bid for the White House might already be in ruins even before it started. Firstly, he has not presented himself as the man who could be trusted on the world stage. If anything, Trump comes across as more of a protester than a presidential material. I wonder how many heads of states would fancy discussing world matters over dinner with him. In trying to be different from your conventional politician, he has ignored one of the basic instincts of politicians; to be all things to all men. Trump has succeeded in marginalising himself to a small part of the American political landscape. He referred to Mexicans and other Hispanics as rapists and drug dealers. Any seasoned American politician would tell you that you marginalise the Latino vote at your peril. His comments about women, Afro-Americans, and even mocking a disabled reporter just show how low he is ready to go, to appeal to everything un-American.

But his latest controversy about Muslims has brought him to the nadir of all controversy. Trump may have sought sympathy with Israel when he proposed his pipe dream to encase America in a concrete jungle. But even Netanyahu could not resist criticising him for his recent remarks about Muslims. It is no wonder that his scheduled visit to Israel on the 28th of this month has been put on the back burner. He has become so controversial that no respecting head of state wants to be associated with him. It is not just a matter of saying incendiary things but his blatant lying has been a worrying sight to behold. He said that thousands and thousands were cheering in New Jersey when the twin towers were collapsing on 9/11; a figment that the Homeland Security service has dismissed outright as baloney. As if that was not enough, he said that there are no-go areas in London for police officers.

Let us harvest a few of the world’s response to his recent remarks about Muslims. Just hours after the Republican presidential candidate Donald J. Trump called for a ban on the entry of Muslims into the United States, one of his Middle Eastern business partners, the Dubai-based Landmark Group, responded by removing all Trump-branded products from the shelves of its Lifestyle retail stores. The Mayor of London Boris Johnson has since invited him to sat nav him to such no go areas, as he is not aware of that. In Britain, Prime Minister David Cameron, of the Conservative Party, dismissed Mr. Trump’s position as “divisive, unhelpful and quite simply wrong.” Prime Minister Manuel Valls of France, which is still reeling from deadly attacks by Islamic extremists, wrote on Twitter: “Mr. Trump, like others, fuels hatred,” and “Our only enemy is radical Islamism.” Hilary Clinton twitted “Tell Donald Trump: Hate is not an American value,”

One of the contestants for the Republican Party nomination has since described Trump as “unhinged”, and this could not be further from the truth. Others feel that he needs an examination from the neck upwards. We all know that among other issues, American elections have been about the battle between the 98% underclass and the 2% over class. Donald Trump may have worked his way up as an astute and successful business man. Sadly for him, he is an embodiment of that 2% that attracts the green eyes of America’s lower middle class. Trump would want you to see him as not pandering to the establishment, but ironically he is part and parcel of that same class that he appears to despise.

Donald Trump has been very good at diagnosing what most Americans may quietly express in their living rooms. Sadly, every attempt he has made to come up with an answer to those problems has either proved unhelpful or makes the situation worse. There is no doubt that the issue with terrorism is a world concern. Those who engage in terrorism in the name of religion are despised by the entire world. But his attempt to come up with a solution by banning all Muslims from entering America, even if temporarily has not only been divisive but appealing to the very terrorists he purports to fight against. Trump’s approach to politics can only be described as placard diplomacy. Even his language has left a rancid taste on the linguistic palate of the Republican Party.

Let us assume that he wins the Republican nomination, how will he fare when the sharks come probing into his business dealings of the past? What has Trump offered in the name of dealing with the economy, climate change, race, jobs etc.? The Republican Party aspirants had longed hoped that Trump’s “popularity” will fizzle out before the voters take to the polls in the Primaries. Indications are that he may well be leading when the Primaries come around. If he does not get the nomination, his plan B would be to go independent. That would have some vote shredding impact on the Republican block. If he wins, will he measure up to the rigours of the contest at close quarters? How will he measure up for unrehearsed questions that he will face from the media? Sarah Palin comes to mind. The problem for the Republican Party is how can any of its other candidates promise to address the legitimate fears Trumpism is exploiting, while disavowing the bigotry and crankery and proto-fascism that the party badly needs?

Trump’s band of backers may be loyal, but they may also be unlikely to swell much beyond the 30-35% of the Republican electorate now registering in surveys thanks to the candidate’s higher negative ratings among party faithful due to his brash demeanour and incendiary rhetoric. While that’s good enough to win when the field is fragmented, it will not carry the day as unsuccessful candidates drop out. Mr Trump may start strong, but fade down the stretch (BBC). By the way, President Putin is having Turkey for Christmas.

Don’t forget to turn your Christmas lights off when you leave the room.