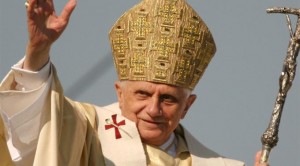 Benedict XVI, the German head of the Roman Catholic Church, has begun his first official visit to his home country as Pope. In a visit to Germany's parliament he urged politicians to seek justice, not just power, and to hold on to the Christian tradition. He received a standing ovation from MPs – though some boycotted the event.

The visit may be one of his most difficult to date, with strong protests expected against his teachings. Several thousand protesters gathered in Berlin's Potsdamer Platz bearing messages such as "Pope, go home!"

Before arriving, the Pope said he did not object to such protests, saying: "It is part of our freedom and we must acknowledge that secularism and opposition to Catholicism in our societies is strong."

After being greeted at Berlin's Tegel airport by an artillery salute and a guard of honour, the pontiff was welcomed by Chancellor Angela Merkel and President Christian Wulff.

Visiting Mr Wulff's residence in the city, Pope Benedict said: "I am not here first and foremost… to follow particular political, or economic, aims but to meet the people and to speak to them about God."

In the evening, the Pope was saying an open-air Mass at Berlin's Olympic Stadium. The stadium, where Hitler hosted the 1936 games, is now a popular sporting and entertainment venue, and some 70,000 people were expected to attend the Mass. 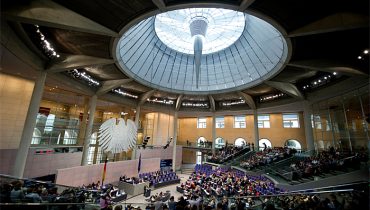 At parliament, the Pope told MPs that it was Christianity which provided the basis of Europe's legal and political systems, and their focus on "the inviolability of human rights".

He praised the work of the Green movement in Germany in fostering respect for the environment – even though members of the Green party were among dozens of MPs who boycotted the speech, out of opposition to Catholic teaching or concern that the event undermined the separation of church and state.

The 84-year-old pontiff will travel widely across the country, where there are officially 25 million Catholics – one in three of the population. Up to 70,000 faithful will attend Mass at Berlin's Olympic stadium

In Erfurt on Friday, Pope Benedict will meet members of Germany's Lutheran Church in the monastery where Luther studied as a monk in the early 16th Century, before breaking with Rome and launching the Protestant Reformation.

After arriving in Berlin, he called on Catholics disgusted by priestly abuse of children not to abandon the Church.  A record 181,000 German Catholics officially quit the Church last year, Reuters news agency reports. Disgust at the Church's handling of child sex abuse by clergy was one factor.

"I can understand that in the face of such reports, people, especially those close to victims, would say 'this isn't my Church any more'," the Pope said in an interview on his plane before arriving. But he added: "The Church is a net of the Lord that pulls in good fish and bad fish.  "We have to learn to live with the scandals and work against the scandals from inside the great net of the Church."

Child abuse survivors were among those joining protests against the papal visit. Protesters objected to the Pope's stance on homosexuality and condoms 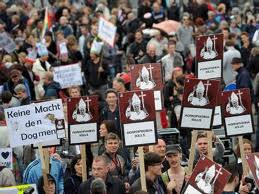 At the protest rally in Potsdamer Platz, some demonstrated against the ban on contraception, with signs reading: "Free choice between Aids and condoms."

Holger Schweitzer, 52, told  said:  "I came basically because of the Church's attitude on gay issues." Rolf Schwanitz, and MP from the centre-left Social Democrats, told the AFP news agency he had boycotted the Pope's speech because it made no sense "to invite the head of a dwarf state to speak before the Bundestag".

Berlin's openly gay mayor, Klaus Wowereit, said he welcomed the Pope's visit and would meet him personally, but he also expressed understanding for the protesters.

Correspondents note that both Mr Wowereit and President Wulff, who is divorced and remarried, are Catholics who in the eyes of the Church lead sinful lifestyles.  Mr Wulff referred to German Catholics alienated by the Church when he spoke during Thursday's papal visit.

"Many ask themselves how mercifully it treats people who have suffered break-ups in their own lives," the divorced president said.

He said it was "important for the Church to remain close to the people and not to turn inward on itself".

The Catholic holy man will fly back to Rome on Sunday 25th Septemer from Freiburg.