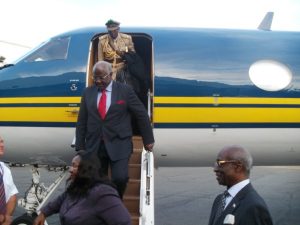 The President of the Republic of Sierra Leone Dr. Ernest B. Koroma accompanied by his wife Mrs. Sia N. Koroma and some of his key cabinet officials arrived in New York late Monday afternoon to attend the 66th Session of the United Nations General Assembly (UNGA) which commenced in Manhattan on September 13, 2011.

While in New York, President Koroma is scheduled to attend an Africa America Institute (AAI) African National Reconciliation and Peace Award honoring the People of The Republic of Sierra Leone at its 27th annual Awards Dinner Gala. The event will take place today Tuesday, September 20th, 2011 at 7 pm at The Light House at Chelsea Piers in New York City.  Tickets to this mandatory Black Tie or National Attire event are $500 – $1,000 and Tables $5,000 – $100,000.  Pupa Baja and the Dry Eye Crew – a Sierra Leonean group are slated to perform at tonight’s Awards Dinner Gala.

AAI say the award is in recognition of the remarkable strides that Sierra Leone has made in the almost 10 years since the end of the 11-year civil war that killed and maimed thousands and all but destroyed its formal economy.

President Koroma will deliver his 3rd address to the 66th Session of the UNGA on Friday, September 23, 2011.  According to the Department of Information and Public Affairs at the Sierra Leone Mission to the UN, President Koroma will also ring the Closing Bell of the NASDAQ Stock Exchange at One Liberty Plaza in downtown Manhattan’s Financial District on Friday, September 23, 2011.

The event is sponsored by American Foundation for African Children’s Organization which claims to work directly with local African organizations to provide a suitable learning environment for underprivileged children. 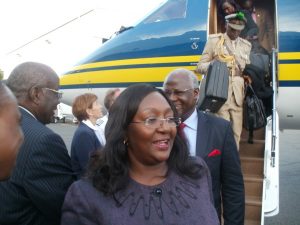 On Saturday, September 24, 2011 President Koroma will proceed to the Garden State of New Jersey for a Retreat and Working Lunch with members of the All People’s Congress North America (APC/NA) at the Ukranian Cultural Centre located at 135 Davidson Avenue in Somerset, New Jersey.

APC/NA officials say the Retreat and Lunch will kick off  at 2 pm until 6 pm.  Following the Retreat, President Koroma will preside as Grand Chief Patron at a Fundraising Banquet in his honor from 8 pm – midnight at the Ukranian Cultural Centre.