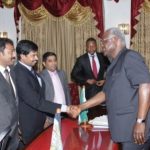 FREETOWN, SIERRA LEONE – Executives of a bio-palm kennel industry, SIVA Industries And Holdings Limited, with a flagship venture in bio-palm ventures in the country- Bio-Palm Star Sierra Leone Limited, has on Tuesday 13th September 2011, outline its investment plans to President Dr. Ernest Koroma during a courtesy visit to brief the Head of State about the group’s projects being undertaken since mid last year to date.

Presenting the delegation to President Koroma at State House the Chairman of the Sierra Leone Investment and Export Promotion Agency (SLIEPA), Mrs. Gladys Strasser-King said the Sierra Leone Bio-Palm Karnel is a flagship agricultural investment project that is presenting cultivating palm plantation in different parts of the country and will be providing bio-energy supply to communities of operation.

SIVA Group Director Shankar Varadharajan informed President Koroma of his group investment in agriculture in Pujehun, Port Loko Kemena, Bo as well as in other parts of the country. He said the project has acquired over 200 hectares of land for the cultivation of palm plants seedling, adding that his venture is set to be a flagship agricultural investment in Sierra Leone. Mr. Varadharajan told President Koroma that his group has already rolled out over one million seedlings across the country.

The Chief Executive Officer of SLIEPA Patrick Caulker said the project is aligned with government’s priority to have private sector investment in the agriculture. Caulker said SIVA is a reputable international entrepreneur with keen interest in high growth, renewable energy, agriculture and food.

The SIVA Country Manager Hardy Tommy said the project will be beneficial to communities of operations. He said a bio-energy will be produced to provide regular power supply to communities where the companies operate in every parts of the country.

President Koroma for his part commended the group for choosing to investing millions of Dollars in the agricultural sector in Sierra Leone, saying government strongly believe that with concerted efforts the country will catch up what it had lost to Malaysia over years.

He encouraged the group to train Sierra Leoneans to be in better positions to take over from the experts when they shall have left, adding that by the look of things the SIVA group’s venture is the biggest investment so far in agricultural sector. “Sierra Leone is the place to invest”, he reassured the group.