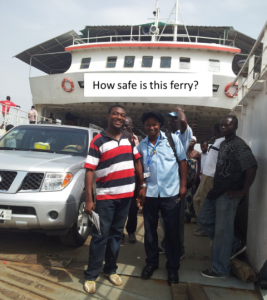 Bad weather yesterday affected the M.V Mahera Ferry which ply the sea route between Lungi and Freetown leaving the ramp damaged. According to the Ferry Captain Sheik Gibril Sesay the unfortunate incident occurred around 3:15pm, “just fifteen minutes after we left (Tagrin) the weather changed and the wind started blowing very strongly, then water started entering the Ferry.” He explained that he decided to slow down the ferry as there was no way to return.
Captain Sheik Gibril Sesay who disclosed that he had been in service for over 25 years said this incident is the worst in his experience. He added that it was raining heavily and the water was rough when they left Targrin. He maintained that moments later, a heavy wave came which washed water into the Ferry causing the ramp (reclining door) of the ferry to cut along with its bracket and chain because it could not stand the force of the water. This he said sent the passengers into a panic and they started fighting for life jackets while others were crying for help. As Captain he said “I ordered my crew to make sure that all passengers have a jacket”.
Cpt. Sesay said people were very nervous when they saw the water entering the ferry even though the ferry was not overloaded. He said there were 14 vehicles and about 300 passengers on board, even though the ferry could carry 37 vehicles and more passengers. Passengers were unable to leave the ferry the normal way, they had to be carried on the shoulders of youths who volunteered to assist when the ferry landed without a ramp or door at the Freetown Terminal around 4:45pm.
Adama Sesay a passenger and a victim of the incident commended the Captain of the ferry saying “We were all crying and shouting as the ferry ramp cut, and some people even went up to the Captains bridge where the captain was struggling, crying for their lives. The Captain tried his best with the help of God he was able to come with us safely.”
Another passenger Samuel Deen a driver of one of the vehicles on board maintained that he had given up hope of survival as a result of what he saw, but with the experience of the Captain, despite the confusion inside the ferry at that time “He was able to comport himself and manage to bring us safe. As you can see, my dress is completely wet as I was standing just by my vehicle looking at what will happen next.”
Mr. Mohamed Fahad, Executive Managing Director of Great Scarcies/Mahera Ferry, disclosed that since he started ferry operations in Sierra Leone, this was his first and major unfortunate incident, but with the explanations from the passengers on board and what he saw, he believes the Captain should be commended as no one was injured neither any property destroyed as it is very rare for such thing to happen “for a ramp to cut in the middle of sea and the ferry arrives safely.”
He said “I think I should increase the salary of the Captain as he has done a great thing for this nation by rescuing about three hundred passengers from drowning.” He said he will start with immediate effect the construction of a new ramp for the said ferry so that it will be ready for use by next week.