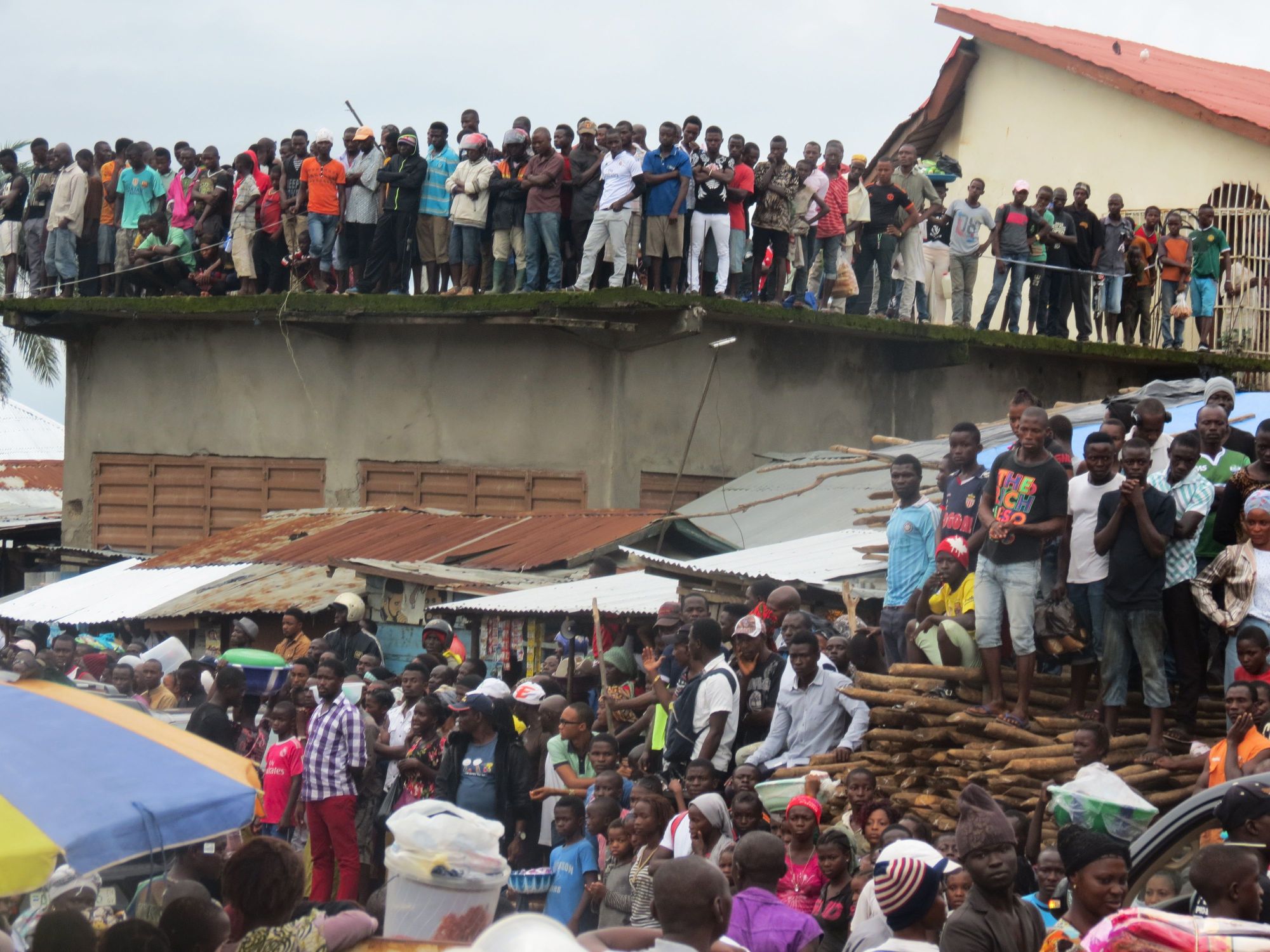 Urbanization is not about simply increasing the number of urban residents or expanding the area of cities. More importantly, it’s about a complete change from rural to urban style in terms of industry structure, employment, living environment and social security. One of the most common criticisms that followed the mudslides and floods in Sierra Leone has been about “overcrowding”. Freetown saw a massive upsurge in its population during the civil war. It became a safe haven, relatively for many people from the provinces. With the unprecedented upsurge in population, Freetown was consequently going to be stretched for space and services, like schools, houses, transportation, medical services, anything and everything. The war is long over, but people have found new environments and ways of living. Unfortunately, not many have settled well into the city dream, and. a lot have found themselves on the fringes of society. It is no surprise then that overcrowding, especially in the slums and ghettoes has become the watch word during flooding in the city.

The concomitant effect of this can be visible with tin shacks springing up in disaster prone areas, as we have seen recently. But it will be dishonest to lay the blame wholly on the behavior of the underclass and underprivileged. The mountainous areas of Freetown, which include Regent and Sugar Loaf, have always been the preserve of the colonial masters and the rich. But since the end of the war, these areas became the place to be, thanks to IMAAT, the British Consulate and the American Embassy. Prior to these institutions, many would have seen these areas as either too expensive to build on or virtually impossible to do so. The new imposing structures became eye openers, and a mad dash was made to erect their palaces. On the other side of the social spectrum, slums and ghettoes mushroomed their way in every dangerous place you could think of.

It is however, very difficult to pin down the reasons for this “overcrowding” to one factor. Nevertheless, there is an undercurrent of factors that may be contributory to the problem of our “overcrowding” in the city. Since colonial days, every public service has been concentrated and centralized in the city. We have been left to believe that if you wanted anything done, Freetown was the place to be. If you wanted a passport, license your vehicle, register a company etc., you had to come down to Freetown. As a country, we have never decentralized our services fully. It is true that we have regional offices but these are in reality aspects of tokenism.

Let us think for a while. Agriculture is predominantly carried out in the provinces. Why can’t we have the head office or ministry of Agriculture in say Bo Town or Kailahun, and the sub office in Freetown for administrative purposes? Why can’t we have the Ministry of Mines in Kono District and the sub office in Freetown? It may sound like a layman’s idea, but will it make some difference? Does the farmer in Kailahun needs to come to Freetown to discuss his agricultural issues with someone in a marbled office in Freetown; someone who does not even know the difference between a spade and a hoe?

I have seen a few regional offices like Immigration and SLRT, Ministry of mines etc. When I was on my sojourn in Makeni a few years ago, I noticed a rise in unlicensed Okadas plying the streets of the city. These bikes had no number plates and the police were very vigilant in apprehending those who were using the roads illegally. Because they were not licensed, these riders broke every traffic rule in the book, knowing full well that the chances of being caught or tracked were remote. The general consensus at the time was that most of these riders were also involved in the spike crime rate; especially at night. The ensuing heavy handedness of the police was a welcome relief to many residents. That was the state of play at face value.

I spoke to some of these so called culprits and this is what I found out. The majority of these riders had secured loans from Microcredit companies, usually with collaterals like a piece of land, a family heirloom or a family member as guarantor to buy the motorbikes. They filled the forms which were sent to Freetown. I have heard stories about some bikers having to wait for their license to be issued for periods ranging from 2 to 3 months. In the meantime, the meter on the Microcredit is running. These guys are literally boxed into a cul de sac. What would you do in this situation? As a result of some bureaucratic gymnastics, these riders are unintentionally forced to break the law by riding unlicensed and uninsured motorcycles; because they had to repay their loans. In some cases, those who could afford it would take their forms to Freetown in person, only to be faced with further gridlocks. It is usual to hear “de pa way for sign de paper nor dae na office”. What happens after that is anyone’s guess. Palm rubbing comes to mind.

This might be just an example of how the absence of functional decentralization can impact on our lives. It is the case in many spheres of our lives, where we have been left to think, believe and expect that if you want something done, Freetown is the only place to go or to be. You can say what you want about the APC government, but the infrastructural development of the roads has been a visible development in the country; bar the Toll road. We need to change the mentality of “Freetown is the place to be”. It is the prevalence of such mentality that has contributed partly to the rise of a high number of people, and especially our youths on the streets of the city. It is not uncommon to see youths with only 2 pairs of slippers, 2 toothbrush or 3 tins of sardines peddling the streets all day. And if you ask him what he /she does for a living, he/she would gladly but misguidedly described himself/herself as a “businessman or businesswoman”.

The phenomenon is nothing new to our country. This didn’t start with the APC government. It started since the colonial and protectorate days. Access to the best schools, hospitals, supermarkets, and right down to the only University were all clustered into this tiny peninsular. It goes without saying that Freetown has outgrown its capacity. It is time we started decentralizing essential services, and I don’t mean a token gesture of buildings with faded furniture and a few computer desktops that are not on speaking terms with electricity. We know that we can’t change the direction of the wind, but we can adjust our sails to reach our destination. Successive governments have not paid any attention to this aspect of our development. In situations where these have been considered, they have been nothing but a token gesture. Because eventually, the final say or stamp of approval has to come from Freetown.

We need to remember that “All urbanization, pushed beyond a certain point, automatically becomes suburbanization…. Every great city is just a collection of suburbs. Its inhabitants do not live in their city; they merely inhabit it.” The right to the city is far more than the individual liberty to access urban resources: it is a right to change ourselves by changing the city. It is, moreover, a common rather than an individual right since this transformation inevitably depends upon the exercise of a collective power to reshape the processes of urbanization. The freedom to make and remake our cities and ourselves is, I want to argue, one of the most precious yet most neglected of our human rights.”

Our country needs a re-think and a major one at that. Call it a pipe dream, but until we get such basics right, it will be difficult to move forward. Many people believe that decentralization means loss of control. That’s simply not true.  True progress lies in the direction of decentralization, both territorial and functional. We can achieve this in the development of the spirit of local and personal initiative, and of free federation from the simple to the compound, in lieu of the present hierarchy from the centre to the periphery. We are now living in a digital world, and contemporary technology permits decentralisation; no excuses. If we are to empower decentralization, perhaps we should aspire to move our local councils more toward becoming local governments, rather than local administration. And this will involve more than just the collection of the local tax.

I am not asking for a Tesco, Wal-Mart or a Home Depot in the Centre of Koidu town. All I am asking for is the facility or service to renew my voter’s card, my driving license, my passport, or export license; without the need to travel 212 miles from Kono to Freetown to do that. If I can send my child to a college in Koidu town, license my car in Makeni, renew my identity card in Bo or even fill my tax returns in Kenema, you will struggle to find a reason why I should live in Freetown. I won’t need Lumley beach, Yikuma beach and Binkongoh will do just fine.

If Freetown has become the nectar to many people, in our endless search for our dreams, is it time we did something to reduce the lure to what is becoming a concentration camp? I am sure that there are a lot of people who would want to live in the provinces. Some would rather return than live the kind of slum lives they are living currently. But what is the attraction, when government workers and especially teachers are paid after those in the cities. A newly employed teacher will have to wait for months to get their appointments approved. Why? Because their applications may be gathering dust on someone’s desk in Freetown. THIS IS SO UNFAIR. When you think, that we are all products of our teachers, we should be treating this noble profession as an endangered species. Teachers need all the protection that is usually accorded to UNESCO heritage sites. If you are reading this, thank a teacher.

Don’t forget to turn the lights of when you leave the room.