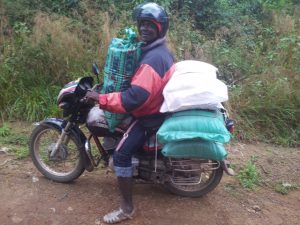 Simio Kabu has been riding the streets of Freetown for five years. It is his job to taxi customers around the city's traffic-choked roads. He says that he earns 80,000 Leones ($18) on a good day – a decent wage in a country where more than 66% of the population live at or below the poverty line. Commercial bike riding is Simio's trade, and it is a burgeoning one.

The Sierra Leone Commercial Bike Riders Union estimates that there are around 189,000 riders – known as Okada riders ('okada' meaning 'cheap motorcycle') – operating across the country.

The riders provide a useful service, helping navigate Freetown gridlocks; yet public and police attitudes towards them are for the most part negative. They are seen as idlers, stigmatised as ex-combatants, and their sometimes reckless driving is considered a menace. Clashes with the police are not uncommon.

Given these attitudes, the riders live precarious lives: they are excluded from accountability processes, and generally feel little allegiance to mainstream society. "Young people form the bulk of our population", says police transport official Angus Michael Soulva. "If they want to cause disruption and conflict, they can. It's up to us to find ways to turn them towards construction, not destruction."

From easy riders to service-providers

Sierra Leone is currently suffering a youth bulge, high unemployment, and poor education. There are no quick solutions. In any case, there is strong demand for the service riders are providing; as long as this is the case, the trade will continue to attract disaffected youths, and its attendant problems could multiply.

Against this backdrop, an intervention by local youth organisation the Centre for Coordination of Youth Activities (CCYA) has been welcome.

The CCYA, which is supported by UK Department for International Development-affiliated Mwananchi Programme, is essentially looking for ways to shift the dynamics in the riders' relationships with officials and mainstream society. The Bike Riders Union has also got involved by mediating between riders and police. All this will hopefully result in improved conditions for both riders and the general public, and a reduction in the number of accidents on Freetown's busy streets.

These developments have entailed a shift towards the formalisation of bike riding. The first step was the inclusion of bike riding in a recent amendment to the Transport and Traffic Act, which includes provisions governing the behaviour of riders.

This is a victory for the CCYA and the Bike Riders Union: with the riders now included in the formal economy, they have a tool to govern the riders' engagement with the authorities and to cement their position as useful public service providers. This counts as progress towards integrating riders into the mainstream community, with all the concomitant rights and duties.

As the union has grown in strength and confidence, the CCYA has taken a step back though it continues to support the executive and has brokered meetings with police officials, journalists, and agencies such as the Sierra Leone Road Transport Authority.

These relationships with government agencies have helped rehabilitate the reputation of riders. Riding high after a generally peaceful, free and fair general election, the president of the union spoke proudly of how union members had been involved in monitoring the elections and keeping the peace.

The riders' union is starting to stand on its own two feet, but it still faces many challenges. It remains far from bringing the majority of riders under its auspices.

And it has yet to fulfil its ambition of a Mano River Union partnership with its corresponding unions in Liberia and the Ivory Coast, which would facilitate the tracking of itinerant riders who move between cities. A local radio DJ who runs popular call-in shows about riders says that the biggest problem the union faces is discipline: too many riders are still neglecting to wear helmets and reflective jackets, and remain unaware of the new regulations affecting them.

The union itself is hardly innocent: riders have reported that its members are prone to extortive practices when collecting fees. If the union is going to be transparent, and successfully balance discipline with open democratic structures, civil society must get involved.

The CCYA is planning an information campaign, complete with posters and radio jingles, to convince riders to join the union. Yet this will not necessarily suffice. Further incentives to join – such as an expansion of the training courses on business skills, and additional support for riders who want to continue their educations – may have to be added.

For now, riders like Simio are coming to see the union as a collective necessity, rather than merely a source of individual benefits. Building on its work with the Mwananchi Programme, the union will have to work hard to bring in young members from the cold, and to get them to engage with mainstream society in Sierra Leone.

Read the original of this report on the ThinkAfricaPress site.