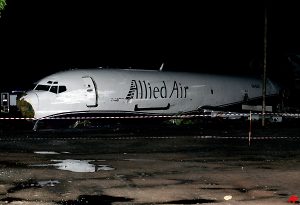 A cargo plane has crash-landed in Ghana's capital Accra, hitting a bus full of passengers, officials say. Ten passengers on board the bus were reported to have been killed while all four crew members survived.

Ghana's airport operator said the plane, which had flown from Lagos, Nigeria, overshot the runway. It said in a statement that the four crew members were receiving treatment at an airport clinic.

"The aircraft collided with a minivan, resulting in 10 confirmed fatalities," the statement added.

Police and troops cordoned off the scene following the incident just after 19:00 GMT on Saturday.

Ghana's Vice President John Dramani Mahama told reporters at the airport that a thorough investigation would be carried out.

"No early conclusions should be drawn. We should allow investigations to arrive at the actual cause. But I can assure Ghanaians that the situation is under control," he said.

Ghana Airport Company said flights were continuing as normal at the airport.