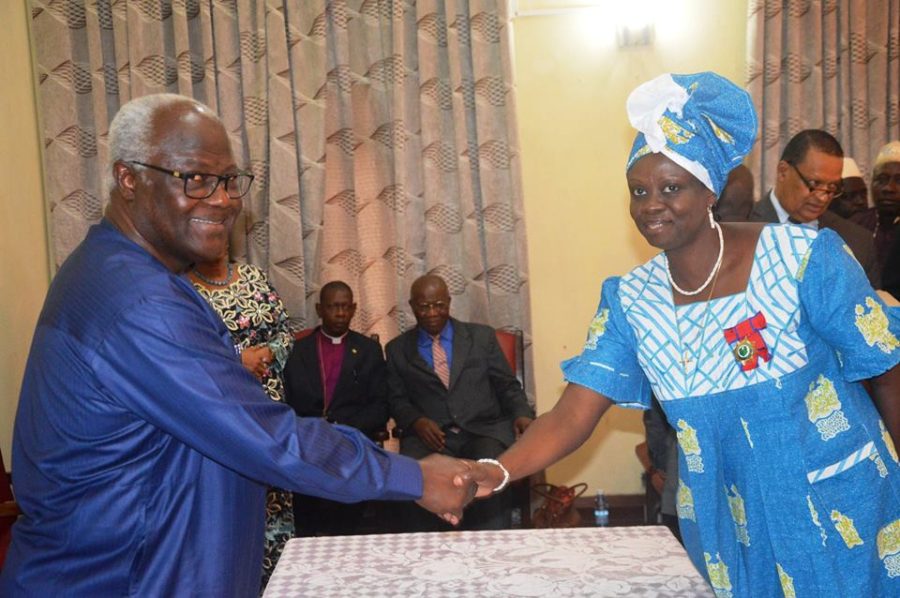 "To solve Sierra Leone’s democratic woes, it is not Maada Bio but Ernest Bai Koroma who must go. Sierra Leone’s problem is not just with Government. We have absence of an effective Opposition to checkmate the excesses of the Governing SLPP” (the sierraleonetelegraph.com). Those were the quotes from the APC stalwart Sylvia Blyden, and already there is blood on the carpet.

Sylvia polarises opinions; thanks to her outspoken and sometimes brash views on matters of national interests. This sometimes lands her at odds with others but also earned her the reputation as the voice of the masses; by her admirers. Unfortunately, the opposing responses this time risks getting her message lost in translation. To some, she is brave to challenge the status quo of the APC. Others have verbally abused her; the last refuge of the incompetent.

Fake press release purporting to come from the APC that she has been expelled for “anti-party activities, fermenting violence, inciting hate, and threatening the personal security of key party functionaries, etc”; wishful thinking. Others have questioned whether she was fed a truth serum at the Pademba Road Prisons; or the effects of being a guest there. But she is known to flip flop along the political corridors of the different parties. Sylvia can sing “hosana” today and say “crucify” him tomorrow. Sylvia would tell you that only God and fools don’t change. The mind is a beautiful thing.

Whether you agree with her or not, shooting the messenger is not the answer. The audacity to call for change could be reflective of “poda poda” talk or what some can only whisper around their dinner tables. Rather than dismiss her off hand, the APC should use this as a moment for a soul searching and reflection. Sylvia is calling for her “dear leader” and “World Best” to be replaced in the first team. This is Ronald Koeman asking the hierarchy at FC Barcelona to strip Lionel Messi of the captaincy.

Her integrity has been questioned with some justification. In the past Sylvia had called for civil disobedience and other forms of “chakra”, referenced some who incite violence from abroad etc. She has now disowned and distanced herself from those preaching violence; and that it does not reflect the actions and wishes of the APC party stance on violence. The truth is rarely pure and never simple (Oscar Wilde). Honesty and integrity are vital assets of leadership, and others may think that she may not have much left of the latter; the difference between being impressive and honesty is wafer thin. But at least, Sylvia is honest enough to acknowledge her mistakes, and brave enough to break rank while others have remained mute and complicit on calls for violence. Silence can be consent.

Does the APC need changes after losing the last elections? Yes. Is changing the old guard the appropriate prescription? Your guess is as good as mine. While some would agree with the need for change, asking for “world best” “Salone messiah” and the “dear leader” to go may be too brutal to others. Previous heads of states have always retired into the political sunset. Despite the professed merits of his “active” role in the APC, the party could struggle to break the umbilical cord. At best, some believe that Ernest should be and act as an elder statesmen or sound board for his party while in retirement. For Ernest to continue to be the focal point, while retired sends the wrong message to others. There was APC before Ernest, and there will be APC after. Is it time?

Those who support his “active/central role should note Ernest is not the next APC presidential candidate. Samura’s selection in the last election cycle was greeted with “you sabi am?”, As the flagbearer, he should be the voice, the focus, the face and rallying point for an “Effective” opposition to the SLPP. But how can he breathe if Ernest continues to hug the headlines?  When Ernest chose Samura as the Presidential candidate, many regarded him as a mere pawn and extension of his 3rd term; to be remote controlled by Korthor Ernest. Isn’t it time he came out of the shadows and cement his own identify? But again, with Chernoh Maju, Joseph F Kamara, and others touted as potential flagbearers, does this augur well for the party? With Bio halfway through his first term, when will the APC be ready to present a united front or sing from the same hymn sheet, in time for the next elections? Oh, I heard that Sam Sumana is in town.

His disciples see Ernest, as the man who has the intellectual capability, the institutional knowledge, and support of the grassroots Sierra Leoneneans”, to chart out the party’s roadmap back into power. Designating him as Chairman for Life resonates with hero worshipping and a dose of sycophancy in itself. To vacate his party while in opposition may be an affront on his ego. But the pragmatists tend to see his active presence as symbiotic; and that the party is collectively too broke to mount a challenge in the next general election. The alleged belief is that Ernest is loaded enough to bankroll the party. Other cynics believe that Ernest also needs the canopy and insulation of the party; citing any potential looming outcome of the Commission of Inquiry by the Bio government. So, if all these speculations and innuendoes are true, you wonder when will the Decree Absolute be issued in this marriage of convenience?  Perhaps, Sylvia is just calling for a Decree Nisi.

Irrespective of your views, should this be a moment of reflection for the APC? The APC has been accused of “doing everything to make the country ungovernable” since the SLPP came to power. The SLPP have not missed the opportunity to use this as an excuse to massage their own short comings. Having Ernest at the helm give some symbolic credence and plausibility to the untrained eye. Even when the APC genuinely opposes and questions some of the political gymnastics of the Bio government, the SLPP would have you believe that Ernest is experiencing withdrawal symptoms from power.

Reading between the lines, you get a feeling that Sylvia is not calling for a slash and burn clear-out. Picture this: “the forest is shrinking. But the trees keep voting for the axe; for the axe has been very clever and convinced the trees that because its handle was made of wood, he was still one of them”.  So, while she was in solitude at Pademba Road, did Sylvia experience an epiphany or a Eureka moment?  Sylvia thinks that her party is in reverse gear, and that” World Best” is no longer the first name on the team sheet. Even Lionel Messi is replaceable and can have an off day; ask Bayern Munich.

Sylvia’s call is in no doubt a bombshell, a political tornado or hurricane. No matter how you look at it, it is bound to cause some political ripples, fissures and head scratching in the APC party. This could be a time for the APC to be realistic and forensic in their soul searching than dismiss her off hand. How the party deals with this will go a long way in papering any political cracks this may have caused. It is controversial, meaning that there are arguments from both sides. The last thing the party needs is a response from the playbook of kindergarten politics.

Like the SLPP in opposition then, the APC will find itself in political coma, if it does not get its act together. The people of Sierra Leone need an effective opposition. If Bio does not measure up, it is up to the people to decide, come 2023. Promoting, supporting and encouraging violence as response to Bio’s government is not in your interests. No opposition party has won elections when such elections have been marred in violence and unfair elections. To stand any chance of winning, the APC should do everything in its power, to ensure that the elections are conducted in a free, fair and peaceful atmosphere. Or have you forgotten our history with Pa Sheki?

Kamala Harris, the Democratic V P pick for the 2020 American elections is a descendant from Bombali Shebora. Her ancestors were known as Kamara, but they spent too much time in Kailahun; hence Kamala. Jokes.

Politics is too important to take seriously.

Don’t forget too turn the lights off, when you leave the room.