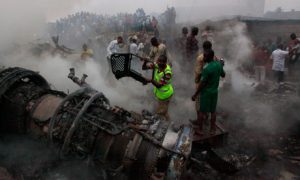 A passenger plane carrying 153 passengers between Abudja and Lago has crashed in a residential area, no hope for survival.  Authorities have declared three days of national mourning for the victims.

It must be noted that similar tragedy happened in  Ghana 48 hours ago as a cargo plane crash-landed in Accra leaving 10 people dead.