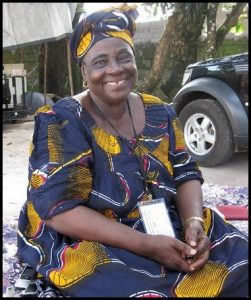 May Her Soul Rest in Peace

Thinking that I was still out there on my morning walk, my nephew Kai sent me an SMS message. “Your nephew’s mother Madam Alice has passed away in Makeni. It is said that she went home after collecting her voter card and then passed away." I being a medical doctor and not having heard of a previous illness the only conclusion that I came to was that she had a ‘heart attack’. I felt sad over the news because although I hadn’t seen her for many years, that is even before her son became President of Sierra Leone I could always imagine how proud she must be to have found herself in such an enviable position- the mother of the President of Sierra Leone.

When I first knew Alice Koroma, in the mid 1960s she was the charming wife of the headmaster of a Primary school in Makeni and at the same time the Chairman of Makeni Town Council, now Makeni City, where I had been transferred. Her quiet spoken husband and I soon developed a close relationship as the medical officer in charge of the Makeni government hospital. By virtue of my official position I became an ex-officio member of the council and of its health committee. Apart from being the 'first lady of the town the late Mrs. Koroma was also a very regular church attendee and one of the ladies who formed the backbone of the Rogbane Road Wesleyan church in Makeni where her husband was a Lay Preacher.

In those days there were a number of other women who were quite active in the church and I often stayed behind for a few minutes after Sunday service and exchanged banter with them. I recall a particularly hilarious story of a new arrival in the township who did not understand the Temne language; the poor man had visited a house at night and in response to his knock at the door, someone inside asked “KENEH WINIE?” meaning “who is it.?” The poor man thinking he was being addressed by another name, replied in krio, “ii nor be kene wini; ii be porsin.” (This is not Kenewini, this is somebody.) From that time to this day every one of those friendly women and I addressed each other as Kene wini.

A number of them have reportedly since passed away and now Alice has gone to join them and her husband Sylvanus. I have referred to the late woman as a charming hostess and so it was. Every so often when I dropped by for a brief visit to late Sylvanus and his wife, even before taking a seat, Alice would ask one of the young Koroma boys to run down to mammy K’s (late Mammy Kiester) to get me a soft drink. She was not being stingy; all I drank in those days were non-alcoholic beverages. One of those ever willing youngsters was a lad named Ernest, who is today’s President of Sierra Leone. This must be a sad loss to him and to the entire family, a sadness shared by all who knew Alice and her late husband Sylvanus. To Ernest, Admire and the entire Sylvanus Koroma family I offer my deep condolences and pray that God would grant her eternal rest and that “Light Perpetual would Shine on her. May her Soul Rest in Perfect peace.