There was pure jubilation inside the United Nations Economic and Social Council (ECOSOC) Chambers Friday for the launch of the African Women Leadership Network.

After an intense three day high-level discussions for the transformation of Africa at the United Nations Headquarters in New York, the African Union Commission in association with United Nations Women and the Permanent Mission of Germany to the United Nations launched an initiative they believe will strengthen African Women leadership for the betterment of Africa in the areas of governance, peace and stability.

About 80 women from across Africa and its Diaspora including women in leadership, politics, the public sector, business, civil society and the media participated alongside senior UN officials and the AUC leadership including Minata Samate Cessouma, Commissioner for Political Affairs, Bineta Diop, the Special Envoy for Women, Peace and Security, Amina Mohammed, UN Deputy Secretary-General and Phumzile Mlambo-Ngcuka, Executive Director of UN Women.

“The message being sent by this Network is that Africa needs to act now to implement the decisions that we have taken in our different deliberations. These can fundamentally change the lives of Women and girls and of Africans in general to prevent conflict and drive inclusive economic growth and development. We must do all of this to achieve clear impact at a local level,”Phumzile Mlambo Ngcuka said.

She emphasized the network being led by distinguished women leaders “is an open-ended network that can only succeed if it works hand in hand with current existing networks.  Above all, we need action, accountability and visible solidarity at both global and local levels.”

During an African New Dawn Radio interview broadcast over WRSU, 88.7 FM at Rutgers University in New Jersey, Verlaine-Diane Soobroydoo, Policy Adviser on Women, Peace and Security, Permanent Observer Mission of the African Union to the UN told listeners the selection process of the 80 participants was opened to all member state of the AU. 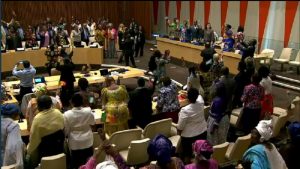 “Each member state of the AU nominated and selected an African woman leader to represent their country in the national plan that are being developed or envisioned at least for the continent.    Then we invited some high level guests.  So you see it is inclusive in terms of representation but also in terms of selection,” Ms Soobroydoo said.

“We are here really first of all to take stock of African women leaders, what achievements we have made, how can we influence policies in governance, how do we go back to our respective countries and ensure that we use the leadership positions that we occupy to bring to the knowledge of women especially these two important documents the Agenda 2030 and Agenda 2063 which has a lot of implications for women leadership?” Dr. Lahai said on the sidelines during Opening remarks and Dinner Debate at the UN Headquarters Delegates Dinning Room.

She acknowledged that though over the years past governments and present government have made commitments to increase the level of women participation of governance at all levels, actually the current number of women parliamentarians in Sierra Leone is 15 less than the minimum 30 percent that was hoped for.

Dr. Lahai insisted much progress has been made in the executive branch compared to the legislature where she has served as first female minority leader.  She said the executive not only boost of women cabinet ministers (about 11) but also women in parastatals, women heading commissions, the judiciary and the local councils.

She recommended the government put in place special measures to address the gender gap between men and women. 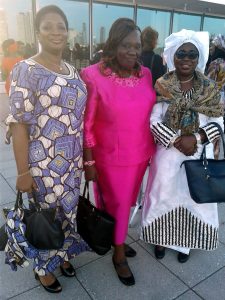 “We need to improve in capacity building of women, we also have to pay special attention to the education of the girl child and also to address some of those cultural barriers that affect the development of the girl child such as early marriage, gender based violence which is on the increase, sexual harassment, rape, sexual penetration and all issues that are affecting the rights of women and girls in Sierra Leone.”

The network highlighted the progress African women have made in continental politics, electing 4 women as President including Ellen Johnson Sirleaf of Liberia, Joyce Banda of Malawi, Catherine Samba-Panza of Central Africa Republic and Ameenah Gurib-Fakim of Mauritius.

And though Rwanda ranks highest in the world with 61 percent of women in parliament together with 7 African countries listed in the top 20 for women parliamentarians in the world, recent elections in the continent show a decline of women elected to parliament.

Still, African women have continued to play a major role in accomplishing sustainable peace and development worldwide.  And their immense contributions have been identified as key in securing solutions to poverty, climate change, food insecurity, better health care and other crises.

The network plans to meet in February 2018 in Addis Ababa, Ethiopia where the AU is headquartered.