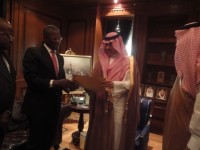 Ambassador Kargbo affirmed his keenness to develop strong relations between Sierra Leone and the Kingdom of Saudi Arabia in various fields of development to serve the mutual interest of the Saudis and Sierra Leoneans. President Koroma's envoy also said that there is strong need for both countries to continue working towards fostering the already existing ties which have been on for the last thirty five years.

In accepting the credentials on behalf of the Foreign Minister, the Deputy Minister welcomed Ambassador Kargbo to the Kingdom of Saudi Arabia and asked him to give his regards to Dr.  Samura Kamara and his team at the Foreign Office in Freetown.

The Prince also affirmed to the newly appointed Ambassador that he would receive all support from the Saudi government and people to enable him to carry out his duties. Earlier, the two discussed various issues to further promote the already existing bilateral and multilateral cooperation between the two sister countries.