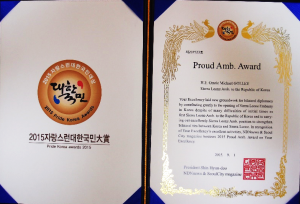 The event was held at Korea's National Assembly (Parliament) Building in the Korean Capital, Seoul.

The NDN News Award Ceremony is one of Korea's most popular and sought after events of the Diplomatic, Political and Business circuit of Korea, and is held annually in Seoul. Past recipients NDN News Achievement Award have included Ministers of Government, Ambassadors, and scions of the commercial and academic establishment of Korea.

Reading the Citation of the Diplomatic Achievement Award to the invited gathering, the President of NDN News and Seoul City Magazine Shin Hyun-doo stated:

Other recipients of Achievement Awards today included the President of the Institute of Foreign Affairs and National Security, Ambassador Bongkil Shin, and the Ambassadors of Bolivia, the Philippines, Ecuador and Côte D'Ivoire.