“There is no Ebola virus anywhere in Sierra Leone” says AMB.Daramy – 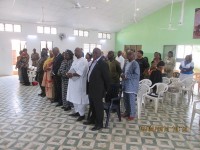 BANJUL THE GAMBIA –  “Sierra Leone’s  newly  appointed Ambassador to The Gambia,  His Excellency Ambassador Basiru Soulay Daramy has informed a cross section of Sierra Leoneans  at his Fajara residence that there is no case of EBOLA anywhere in Sierra Leone.

His excellency in his address to Sierra Leoneans confirmed  that The Gambia transport minister four days ago ordered  Airlines operating in the Gambia “not to pick up passengers in Freetown, Liberia and Conakry as bound passengers to Banjul” due to what they referred to as suspected cases of the deadly EBOLA virus in these neighboring countries.

Acting on the suspension of the Airlines from Freetown to Banjul, the newly appointed Sierra Leone Ambassador to The Gambia His   Excellency Soulay Daramy, has in a letter to the Gambian authorities supported with practical and technical evidence denied the existence of any confirmed cases of the EBOLA virus Anywhere in Sierra Leone.

According to the Chief Medical Officer in the Ministry of Health and Sanitation in Sierra Leone, Dr. Brima Kargbo in an April 12 letter to the world governing body, has confirmed the same, there is no laboratory confirmed Case of EBOLA. The report added that so far rumored suspected cases have been tested using RT- PCR and ELISA and all proven to be negative for EBOLA.

“However” Dr. Brima Kargbo said “the country remains to be vigilant with epidemiological surveillance and increased awareness raising activities on the risks factors of EBOLA and for individual personal protection around the borders of Sierra Leone”

The Chief Medical Officer, further added that the country have Metaboita Inc and TULANE University (A US based research Institute) supporting the effort of the country in addition to the World Health Organization ( WHO). The supporting technical documents validating the High Commission’s stance of no known cases of the EBOLA virus existing in Sierra Leone at this moment were attached and forwarded to the Gambian Ministry of Foreign Affairs for ease of reference

Ambassador Soulay Daramy as a result of the overwhelmingly fact herein attached, wishes the Gambian government and authorities to be appraised of the embarrassed and discomfort the action and inactions of The Gambia Airlines has caused on the free movement of Sierra Leoneans to the Gambia and international visitors travelling out of Sierra Leone through The Gambia Bird.

“In closing deputy  Ambassador Haja Saidata Sesay said her government will highly appreciate revisiting of the decision taken by the Airlines to further harmonize the long standing relationship between the two sisterly countries.