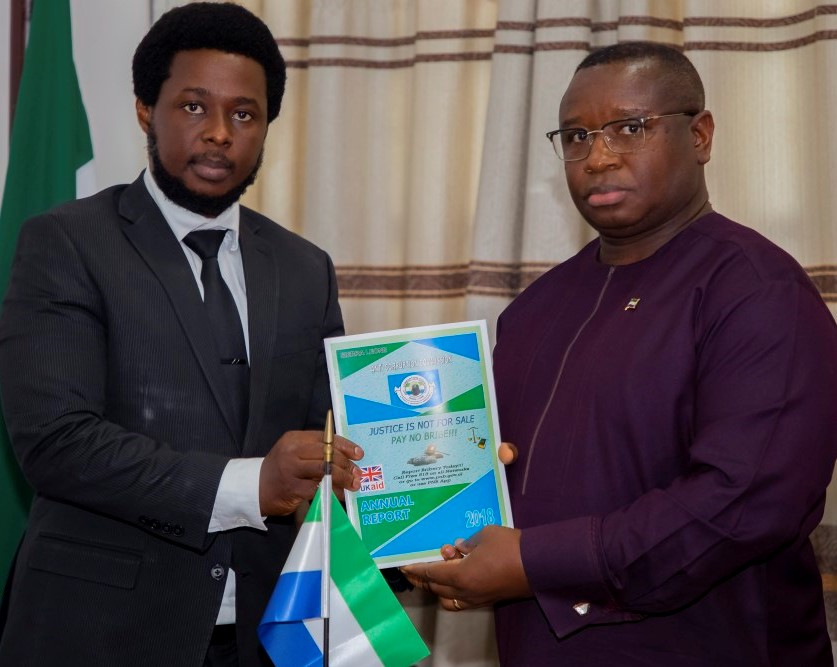 The Anti-Corruption Commission, ACC, has met at State House to present its 2018 Annual Report to His Excellency President Dr Julius Maada Bio in accordance with Section 19(1) of the ACC Act of 2008.

Commissioner of the ACC, Lawyer Francis Ben Kaifala, said they were entrusted with the responsibility of combating corruption in Sierra Leone and that in doing so there were certain obligations in the Law as safeguards in the interests of the country with one of it being the presentation of an annual report to the President.

He said by all indications 2018 proved to be very good for the fight against corruption in Sierra Leone. The ACC boss highlighted key areas covered by the 52-page report, including the increase in conviction rate, increase in the revision of systems and processes to entrench prevention activities in the country, increase in a lot of activities done by the Commission, especially public education and progressions in the indexes that control corruption across the board.

“This report covers half of the time which the New Direction took over to run the campaign against corruption and that period itself has been most successful in terms of the results we have produced. We are thankful for the support we are having from the President, his government and the people of Sierra Leone. We are pleased with the will that is coming from the President and assure you of our determination to win this fight,” he said.

On his part, President Julius Maada Bio thanked the ACC team for adhering to their statutory obligation and commended them for their hard work and diligence to the fight against corruption in the country. He said the ACC had done quite a lot since the new leadership took over for which he was pleased. He further encouraged them to do more.

“The fight against corruption is a fight we will fight and win. Too many people suffer when corruption takes centre-stage and chokes up the development process and that had been the situation in this country. We have never really benefitted a lot from our natural resources because of corruption. If we are serious about development, then we must be serious about the fight against corruption. So, I want to commend you for the good work,” he ended.