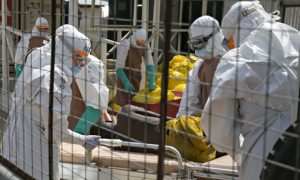 Ebola patients at a treatment centre in Sierra Leone have been given a heart drug that is untested against the virus in animals and humans, a move that has been deemed reckless by one senior scientist and has prompted UK medical staff at the centre to leave.

A 14-strong team of British doctors, nurses and paramedics stopped working at the Lakka treatment centre in Freetown because of their concerns over what they considered the experimental and potentially dangerous use of the drug, and other safety issues.

The 22-bed treatment centre is run by Emergency, an Italian NGO set up by heart surgeon Gino Strada to bring world-class cardiac surgery to some of the poorest parts of Africa.

Emergency says it wants to give patients the standard of care they would get in Europe, both at its Ebola treatment centre (ETC) at Lakka and at a new 100-bed centre at Goderich in Freetown, built by the British army and funded by the Department for International Development (DfID).

But UK volunteers sent to work in Lakka in late November felt Emergency’s approach was too ambitious and may have contributed to a death rate higher than at some other centres.

Emergency has stopped using the drug, amiodarone, after a request from DfID, which had been alerted by the British medics. It says it is planning a formal trial.

Jeremy Farrar, director of the Wellcome Trust, which is funding drug trials starting in west Africa, said it would be reckless to use amiodarone, which affects the heart, other than under strict conditions. “This is the sort of terrible consequence of not having a logical, sensible approach. I think it is reckless not doing this in carefully controlled conditions.”

Farrar, a member of the World Health Organisation scientific and technical advisory committee that is looking at potential Ebola drugs, said amiodarone “was considered for the WHO priority list and it was decided it was not on the priority list. It doesn’t mean to say it is absolutely terrible, but you shouldn’t really be using it unless you have got very careful monitoring of the heart. What we see sometimes in the lab does not translate into having an antiviral effect in humans.”

Farrar believes it is vital that well set-up clinical trials should be carried out in the epidemic to discover treatments that work.

At the Lakka centre, patients were given large numbers of drugs, including amiodarone, through tubes inserted in the veins known as cannulae. The medics alleged that this caused complications and that the frequent use of needles put staff at risk. Two doctors at the Lakka centre have been infected with Ebola. A Ugandan paediatrician tested positive in early October and was flown to Germany for treatment. A second doctor was admitted to a hospital in Italy on November 25.

Amiodarone is licensed as a drug to regulate the heartbeat. Its experimental use in Ebola by Emergency followed the publication of a paper in August by scientists in Hanover, Germany, suggesting it could inhibit a virus such as Ebola from entering cells. The work was done in the lab.

But the UK team said no trial had been done in animals or humans to investigate possible detrimental effects on people with liver, kidney or breathing problems, which are common with Ebola.

In a report to UK-Med, which recruited volunteers from the NHS to work in Sierra Leone, and passed to the DfID, the team wrote: “We were made aware of the experimental use of amiodarone very early on … Our immediate concerns were surrounding the use of amiodarone on this vulnerable and difficult group of patients with complex physiology and the concern that the toxic side-effects of amiodarone could in fact be contributing to increased morbidity within the ETC. Given that the mortality rate in the Lakka ETC is around 67% despite aggressive intervention, and that there seemed to be a high rate of otherwise unexplained respiratory distress, it would appear that there may be an aspect of this intensive therapy which may be having a detrimental effect.”

Rossella Miccio, the coordinator of Emergency’s humanitarian office in Sierra Leone, said that the mortality rate was not as high as 67%. “It was around less than 60% – 58 to 59%,” she said. Médecins sans Frontières, which does not use aggressive interventions, has a mortality rate of between 50% and 60% at its centres.

Miccio said Emergency was planning to run a trial of amiodarone but, in the meantime, “was using it in an emergency and compassionate way”. “Amiodarone is not an experimental drug,” she said. “It has been used for the past 50 years. All the side-effects are very well known. That is why we felt it could be used.”

The UK team was concerned that the drug was being given to a very different sort of patient from those with irregular heartbeats in Europe. The Ebola patients had severely deranged liver function and electrolytes, they said, and the drug was being used without appropriate monitoring or patient consent.

A great deal of the nurses’ time was spent putting tubes into veins and administering large numbers of drugs. “This … meant that the main focus of the Emergency staff was to ensure the patients received these drugs instead of ensuring they were adequately hydrated, clean and comfortable,” the team wrote. Some patients developed inflammation from the amiodarone and had to have a tube inserted into a large vein near the heart.

The British volunteers were also concerned about the use of diuretics – drugs to increase urination – in patients with kidney failure as a result of the virus. Ebola patients suffer from severe dehydration.

Emergency says it rehydrates patients and then uses diuretics to flush the kidneys. It also says it was well-equipped to monitor the condition of the Ebola patients it was treating, with a lab inside the so-called red zone.

“The basic principle is that we would like to provide here in Sierra Leone what we are expecting to be provided to us in Europe if we get sick,” said Miccio. “We explain to the patients what we are going to do to them. They trust in the doctors.”

DfID said it had asked Emergency to stop using amiodarone because the drug was not approved by the health ministry. “The drug was being administered in Emergency’s own treatment facility at Lakka, where the NHS volunteers were training prior to their deployment in the UK-built Ebola treatment facility in Goderich,” said a DfID spokesman.

“As soon as we became aware, we asked Emergency to stop administering it and withdrew NHS volunteers. Emergency complied with this immediately and we are working closely with them to ensure all clinical activity at Goderich adheres to national standards.”

A paper published this week in the journal Emerging Microbes & Infections found 53 drugs that had an antiviral effect against Ebola. Amiodarone was not on the list. One of the authors, Prof Adolfo García-Sastre, director of the Global Health and Emerging Pathogens Institute at the Icahn School of Medicine at Mount Sinai, New York, said amiodarone failed to make the cut. Although it did have an antiviral effect, “it was slightly less potent than the final 53 compounds we selected”.