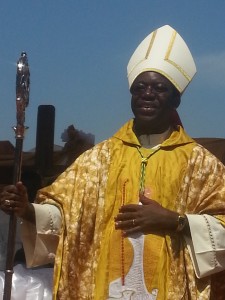 The controversial Bishop of the Diocese of Makeni, Monseigneur Henry Aruna has been ordained at an impressive ceremony at the St Edwards Secondary School compound in Freetown becoming the first Sierra Leonean to head the northern diocese.

When he was first appointed by Pope Benedict XVI in January 2012, priests and laypeople of the diocese rejected him saying his name had leaked before it was formally announced and that he hailed from the eastern Kenema district.

The ceremony, which took place on Saturday 5 January 2013, was attended by Catholic faithful from around the country. The Archbishop of Conakry and bishops and priests from Liberia, Gambia, Ghana, Nigeria and Guinea were also present.

There was singing and dancing to accompany the investiture. But for others it was so emotional that they had to break down.

The papal bull announcing the appointment of the new bishop was read out before he later performed ceremonies including lying prostrate on stage as a mark of subjugation before God.

But indigenous priests and laypeople of the diocese were evidently absent at the ordination. They have repeatedly and forthrightly made their position clear since the appointment one year ago of the new bishop that they were not interested in him. This prompted the ordination to hold in Freetown instead of Makeni, prompting many to ask how he hopes to run the church in Makeni.

In a recent letter written to the Vatican the laypeople of the diocese renewed their opposition to the new bishop while priests told a visiting delegation from the Holy Sea that they would not cooperate with their new boss.

The chief consecrator, Most Rev Potas Rugambwa made an impassioned appeal that the appointment of a bishop was from God and that all should respect that regardless of the ethnicity or nationality of the said bishop.

Bishop of the Kenema Diocese, where the controversial bishop was serving as priest before his appointment, also lamented over the conundrum that had beset the Makeni church since the naming of Bishop Aruna. Bishop Patrick Koroma said that Aruna’s mother had asked for her son not to proceed to Makeni because of concerns that could be killed because of the animosity against him there.

Bishop Aruna himself spoke of the “difficult times” he had had to go through which forced him to go to neighbouring Guinea. But he said he bore no grudges against anyone.

“I would like you to understand that I do not hold anything personal against you. No!” he said, adding: “I leave it in the hands of the Holy Father. It is a family difficulty. It is being handled in a family way” he went on.

Bishop Aruna said that he had had to go through sleepless nights “moments of frustration, stress, depression. I have received unchristian phone calls and text messages”. But he went on that he had put all of that behind him in the interest of his service to God.

It is difficult to see how the new bishop will run his diocese from Freetown , or if he goes to Makeni, who will be willing to work with him amid such implacable opposition to his appointment, and now ordination.