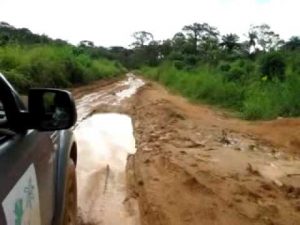 Drivers plying the route from Bo to Pujehun have expressed grave concern over the deplorable condition of the forty miles long journey to the district describing it as a serious death trap.

Speaking to this medium in an interview, a driver of a vehicle with registration number AGU 097 Mohamed Sorie Kabba said vehicles almost spent the whole day on the road from Bo to Pujehun due to the terrible road condition. He said there are serious cut-offs on the road and even in the town ship of Pujehun where passengers are obliged to dismount from the vehicle for the driver to cross the point.

According to Mohamed, passengers used to pay less than fifteen thousand Leones from Bo to Pujehun but that this has now astronomically added to twenty thousand Leones over the last four months due to the deplorable nature of the road and heaped blame on the Government of President Ernest Bai Koroma for not fulfilling their promises to rehabilitate the road in 2007 in line with his Agenda for Change.

When contact for comment the Chiefdom Speaker of Kpanga Kbondeh Chiefdom, Chief Lansana Koroma confided that the deplorable condition of the road has contributed to the high inflation of goods especially those locally produced from the commercial are of Gbondapie in the district. Cost of fuel and other commodities are increasing at an alarming rate.

Chief Lansana further said, since T Max started the road construction work in the district they did not see road construction machines like Bull dozer, Caterpillar, Stone crusher etc except they used men to dig the drainages and also do clearing on the road.

Adding he said, that in such nature T Max is not a good road construction company to recon within in the district because they are doing more harm than good he stressed. Venting his anger he said even though there are making drainages two of their stakeholders have suffers in the hands of such drainages were I their foot were broke off from their legs.

He maintained that passengers are now finding it difficult to go to the district due to the high transport cost where as it is against this background that the people of Pujehun are calling on all stakeholders and indigenes of the district to put hands on desk in other to salvage the ugly situation.

When contacted for comment about the nature of the Road the Base Engineer Tee Marc construction company Dean Lake said they have been contacted to construction the road leaking from Bo to Pujehun including the township as a whole, they are trying their level best to work to the expectation of the people.   why the delay he said, they find it difficult to established a quarry except they go all the way five  miles to get stones to go about their work, he further said they are presently embarking on the drainages and culverts system, later  they start the road construction proper. He assured the people of Pujehun District that very soon they will complete the road work.