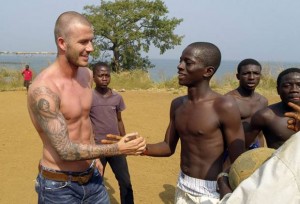 Famous actresses like Angelina Jolie have become the butt of many jokes because of their humanitarian or “good works” in Africa and other parts of the developing world. In Sierra Leone alone, a few of the Hollywood A-listers have taken up some sort of cause or another, highlighting the plight of war affected children, of maternal and infant mortality, malnutrition and other social challenges.
Actress and producer Salma Hayek caused a bit of a stir when she came to Freetown and was pictured breastfeeding an African baby (she still had breastmilk from her own recent delivery) and lecturing women on the importance of exclusive breastfeeding.  Some critics saw Hayek as another opportunistic Hollywood star exploiting the issue of poverty and nutritional deficiencies in African children to buttress her own image as a “do-gooder” in the world.
A few Sierra Leonean cynics grumbled that these affluent, famous western women continue to portray African women as ignorant, always lacking in knowledge of what is good for their children and their own health and in need of enlightenment from more advanced, educated and wealthy western (especially white) women.

Celebrity activists are not limited to Hollywood stars but are also found among famous politicians such as Tony Blair and premier athletes such as David Beckham. In the case of the former Prime Minister of the UK, Tony Blair’s office is heavily involved in the capacity building efforts of Sierra Leone in various sectors through his African Governance Initiative.

The AGI's consultants are young, upwardly mobile British or western-based professional men and women who can be spotted at Lungi airport boarding local helicopters to various parts of the country where they work hand-in-hand with counterparts in Government and non-Governmental sectors.
They “do-good” but on a different level – they are neither apologists for the situation post-war Sierra Leoneans find themselves in  nor are they self-deceptively ideological about their intentions in the country.  Most are on a serious mission to advance their individual professional or career ambitions in Government in the UK, in international development, consultancy firms and so on.  Sierra Leone is a convenient (albeit sobering) means to accomplish longer term ambitions elsewhere. 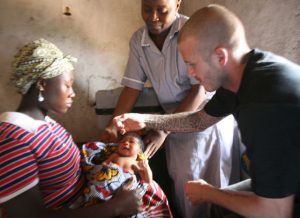 As a world-class athlete, Beckham is not a typical celebrity activist; in fact, he would probably abhor this designation.  A Unicef goodwill ambassador to Sierra Leone, Beckham's main purpose for visiting the country was to bring the world's attention to the dire situation of children under five in the aftermath of protracted civil war.  Beckham traveled to the Northern Province, visiting seriously ill and malnourished children at a Community Health Center and managed to stop spontaneously in Freetown, the capital city, to kick a soccer ball around with local youth admirers and fans.
Some observers complain that A-listers such as Hollywood actor Leonardo DiCaprio and Djimon Hounsou, both starring in the film Blood Diamonds, have not done anything to benefit the people and country they chose to portray in their blockbuster film.  In fact, there were bitter complaints by local Sierra Leonean groups against the production of the film and its perceived insensitivity to the experiences of the victims of the war in Sierra Leone.
The protesters mentioned the fact that the film was not even produced in Sierra Leone, but in South Africa, and that Sierra Leonean actors and extras were not used but rather other Africans and African-Americans.  Other protests were organized by Uhuru Solidarity Movement to challenge the film's alleged racism and support of neocolonial capitalism.  To these critics, DiCaprio and Hounsou are the antithesis of the typical celebrity activist: they are the big-time celebrities that don’t care, who are just doing a job that will earn them millions of dollars but they have no heart or concern for the sufferings of those they appear to identify with at least on screen.

Others complain that the few major celebrities, such as Idris Elba, who are of Sierra Leone descent do not even acknowledge their country of heritage let alone contribute in some way to its advancement.  Elba, whose father is Sierra Leonean and mother is Ghanaian, has never travelled to Sierra Leone or Ghana but has expressed an interest in getting to know his roots.  In May, 2011, Elba made a surprise appearance at the official 50th Independence Anniversary Celebration organized by the Embassy of Sierra Leone in the US and the Jubilee Independence Committee headed by David Vandy, a longstanding radio show host at Voice of America.  In a later press statement, Elba emphasized his desire to build a clinic and movie studio in Sierra Leone.   Another name that has been making the rounds lately is a rising star, Sahr Ngauja, the lead of the popular Broadway hit, Fela.  Though Ngauja had never traveled to Sierra Leone by the time he rose to fame, he has since traveled back and forth on several occasions, establishing links with family and laying the foundation for development projects in the near future.

So, what about some of these real celebrity activists, the honest do-gooders who, like Beckham, aspire to use their success and fame to draw the world’s attention to the plight of those who are less fortunate or to advance a cause or issue of social justice that they feel particularly passionate about?  Is there really a problem with celebrities choosing to promote their own careers through aligning themselves publically with a specific problem that affects them personally?

Aren’t they killing two birds with one stone: branding their image as intelligent and compassionate superstars, goodwill ambassadors who play their part in poverty alleviation and sensitization to critical global problems on the one hand while using this brand to secure greater visibility and hopefully better roles in Hollywood?  Isn’t it better to read about Angelina Jolie, Madonna, and Sandra Bullock adopting African or black babies than being bombarded with images of the hard partying, larger-than-life libidos and male exploits of the likes of Paris Hilton, Kim Kardashian, and Lindsay Lohan?
Shouldn’t we feel better knowing that they are leading the way and setting examples for their fellow celebrities to invest in poverty alleviation and not additional multi-million dollar mansions, expensive cars, exclusive vacations and other indulgences that do nothing to improve the world we live in?  Isn’t it worthy use of their fame to become spokespersons on real life problems such as domestic violence, rape, hunger, eating disorders, and chronic illnesses that even they may have personally encountered or endured?

In fact, it appears as if not a few of these do-good celebrities may be motivated by their own experiences of abandonment, violence, rejection, pain or illness and that after achieving success, they can now turn to confront their own demons by openly helping others who face similar struggles and don’t have the stature or exposure that the celebrities enjoy.  So, instead of turning to drugs or reality shows to anesthetize their past experiences, some of them reach outside of themselves to connect with others and share in familiar ordeals.  And so, in Sierra Leone alone we've had high (and low) profile visits from Rosario Dawson who has openly talked about her past experiences and current commitment to advancing women’s rights in health and sexual matters in different parts of the world, including Sierra Leone.  And, more recently, Victoria Secrets supermodel Selita Ebanks has made Sierra Leone an important place to connect with other women, many of whom confront life and death challenges during childbirth, simply because they cannot afford transportation to hospitals for safe deliveries.

For Selita, there was no doubt in her mind what she felt compelled to do after visiting Sierra Leone and learning about high rates of maternal mortality.  Through an initial partnership with Shine on Sierra Leone, an NGO founded by Hollywood casting director, filmmaker and humanitarian, Tiffany Persons, Selita was able to get her good industry friend, Russell Simmons, to host a party where he invited several of his well-to-do friends who ended up donating thousands of dollars towards Shine’s maternal health program.

Selita was invited back to Sierra Leone to take part in a ceremony hosted by the First Lady, Madame Sia Nyama Koroma, that launched the maternal health program through her Women's Initiative for Safer Health (WISH) and Wellbody Alliance, a  community-based clinic and health organization in Kono District in the eastern part of Sierra Leone.  Although Shine is now focusing more exclusively on education activities, the maternal health program has been fully established at Wellbody’s clinic and Selita is now the goodwill ambassador for this program.

As part of the 5th Miss Sierra Leone USA Pageant from June 29 to July 1, 2012, Selita will join forces with Wellbody Alliance, Johns Hopkins Safe Surgery and Anesthesia in Sierra Leone (SASSL) Initiative, Omega Psi Phi and the organizers of MSLUSA to highlight some of the advances in maternal health in Sierra Leone as well as the continued challenges in making deliveries safe for pregnant women.  An aspect of this collaboration is to bring to the attention of the Sierra Leone community at home and in the diaspora, the critical role of celebrity activists such as Selita Ebanks in advancing the country’s development goals.  We challenge critics and cynics to engage with these individuals, join hands with them and guide them in their efforts as well as their representations of Sierra Leone within the global community.