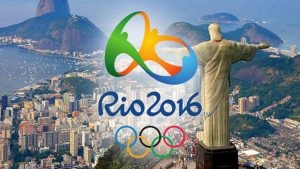 The first written records of the ancient Olympic Games date to 776 B.C., when a cook named Coroebus won the only event–a 192-meter footrace called the stade (the origin of the modern “stadium”)–to become the first Olympic champion. However, it is generally believed that the Games had been going on for many years by that time. Legend has it that Heracles (the Roman Hercules), son of Zeus and the mortal woman Alcmene, founded the Games, which by the end of the 6th century B.C had become the most famous of all Greek sporting festivals. From the 8th century B.C. to the 4th century A.D., the Games were held every four years in Olympia, located in the western Peloponnese peninsula, in honour of the god Zeus. Their influence was so great that ancient historians began to measure time by the four-year increments in between Olympic Games, which were known as Olympiads.

The first modern Olympics took place in 1896 in Athens, and featured 280 participants from 13 nations, competing in 43 events. Since 1994, the summer and Winter Olympic Games have been held separately and have alternated every two years. But how have things changed today. The games have evolved beyond recognition from those days. One thing that has remained constant since then is the desire of the athletes to be the best in their respective fields. But such desires, such competitive spirits, though admirable have come at a high price that is threatening the very foundations on which the Olympic spirit was built. Many believe that the most important thing in the Olympic Games is not winning but taking part; the essential thing in life is not conquering but fighting well. It is sad that in today’s games, some athletes will go by any means necessary, just to win. It is that sort of Machiavellian principle that appears to bring the whole games into disrepute.

Rio 2016 is the first time in Olympic history that a South American country has hosted the Games. So when Brazil won the right to host this year’s Olympic Games, athletes and spectators had hoped that they were in for a treat; a combination of games and carnival.. Hosting the games could not have happened to a more deserving country. Since the announcement, it was an open secret that Brazil would be undertaking a very expensive pastime. Against the background of security anxieties, political and economic uncertainties, the pessimism surrounding the games was understandable. Against all odds, the country has so far played host to world community. In our world that has become so violent and littered with conflicts, the Olympic Games can be seen as a gentle reminder of the need for the world to come together as one. There can be no better way to show this than for the first time, a team of athletes who have been forced to flee their countries have been allowed to compete for the first time. The (IOC) said five to 10 refugees are expected to qualify and compete under the Olympic flag. The games are a symbol of man’s ability and capability to overcome the insurmountable. It is the theatre of legends, where records will be broken and new ones set. Unfortunately the 2016 Olympics, no matter how successfully staged, would be remembered for the wrong reasons; thanks to cheats who believe that “winning is everything”.

The Olympic Game should be seen as the quadrennial celebration of the springtime of humanity. Some Russian athletes in track and field events have been banned, following allegations of state sponsored “doping”. If this is disheartening for the innocent athletes who may have been tarred with the same brush, spare a thought for the Para-Olympians.Russia’s entire Paralympics team has been banned from the event after evidence of state-sponsored doping. Russia claims that it has been left as a political scapegoat. As the bitter row intensified among athletes, a Russian swimmer claimed that the West was launching a new Cold War over Olympics drug-cheating allegations.  The International Olympic Committee (IOC) was expected to adjudicate on the banning orders. Instead, it was left to national organisations to make the decision. Many have seen this as a cop out by the IOC.

It was not therefore surprising that finger-wagging, boos from the crowds and fierce criticism from rival athletes greeted the first Russian medal-winners after the country escaped a blanket ban for state-sponsored cheating. Rower Pete Reed, vying for his third gold in Rio, summed the feelings of many; : “Personally I think the IOC was weak in not making the right decision which would have been, I think, to ban Russia from the Olympics. … It needs to be clean. It can’t all be about money. “Russia denies its athletes cheat despite a report for the World Anti-Doping Agency (WADA) finding its government spent years covering up hundreds of doping cases.

The Olympic Games is in danger of losing the confidence and trust of its spectators. The Olympic Games served a true altruistic purpose, but it is beginning to appear that it has long since outlived it. But the modern Olympics is fast becoming a scandal magnet.The IOC has a moral responsibility to clean up the games or risk relegating this grand bazaar into history. We all know that there is a lot at stake here. The sponsors have a lot to say about the games. Some have even accused the IOC of buckling under pressure from the games’ sponsors. Others believe that the IOC would have bitten the finger that fed it, if it had banned the whole of the Russian Federation from competing this year. Is it any wonder that only the whole of Russia’s Para-Olympics team was banned amid allegations state sponsored doping? So which organizations sponsor the Para-Olympic Games? Big name brands like Nike, Adidas, and American Express etc. appear to be missing in the sponsors’ list of the Para-Olympic Games. Should we read anything into this?

Notwithstanding the blot on the integrity of the games, the IOC should pull its finger out and stamp on any form of cheating or risk losing the games to the “dopers”. You cannot help but feel sorry for clean and genuine athletes who lose to cheats. The situation is worse for athletes like the Para-Olympians. We live in a world where sports have the potential to bridge the gap between racism, sexism, disability and discrimination. A lot of work has gone into trying to erase the stigma of disability. Despite their short comings, disabled athletes should be lauded for their incredible spirit to participate in these games. How devastating could it be for these disabled athletes, especially those who may be clean, and not allowed to show what they can do after 4 years of training?

What is the message that the IOC is sending to them and the issue of disability in general; that they are sub-humans and can be easily discarded on to the scrapheap of humanity? If anything, it was the able bodied athletes who should have been banned. The IOC needs to deal with this scandal more vigorously. We know that the IOC has awarded medals to athletes post the games; after some winners have been found to have cheated.  There is no joy in that, because you cannot recreate the joy and atmosphere that comes with the event in real time. The IOC needs to consider life bans that are irreversible for cheats. There should be no second chances for them. In this day and age where you can carry out an AIDS/HIV test in minutes, why can’t the IOC adopt a similar procedure? These are some of a few measures the IOC needs to consider or risk making itself irrelevant.

My heart goes out to all those clean athletes and especially the disabled.

Don‘t forget to turn the lights off before you leave the room.