The emergence of social media is a great opportunity for everyone as it enables us to connect and share vital information without much headache. But the opportunity is gradually turning into a mere curse for Sierra Leoneans as many people are now bent on misusing it to satiate their own selfish desires.

During the past elections, we witnessed both the ruling SLPP and the then incumbent APC constantly misinforming the gullible voters by playing with polling returns, making claims and counter claims, publishing secretly recorded audios etc. at the detriment of each other .  But what is absolutely absurd and needs to be quickly abolished, however, is the publication of confidential government documents in the social media.  This does not fall under freedom of information and it cannot be justified as such. It is simply a professional misconduct as it shows the lack of administrative maturity and ability of our civil servants to handle confidential government affairs, and their lack of adequate knowledge about their own limitations in national politics.

We all know that president Bio is not the first and he might not even be the last Sierra Leonean president who begged assitance from the Gulf States. We know how the past APC government led by President Ernest Bai Koroma incessantly begged the Arabs for many things without disclosing it to those who elected him.  Hajj tickets for example, were annually begged from many states around the gulf which president Koroma used to compensate party loyalists all over the country without telling anyone the sources of funding.  Hajj is recognized as one of the five pillars of Islam and it’s clearly expressed in the Islamic dogma that performing it depends on individual willingness and ability to repent as the candidate should remain puritanical after the ritual for the rest of his/her own life. This is why, in fact, Prophet Mohammad is said to had advised his (young) followers to respect, obey and help their parents instead of performing Hajj.  Unfortunately president Koroma’s administration bastardized the holy ritual and turned it into a political instrument which he used to compensate his kin, kith, concubines and party loyalists. 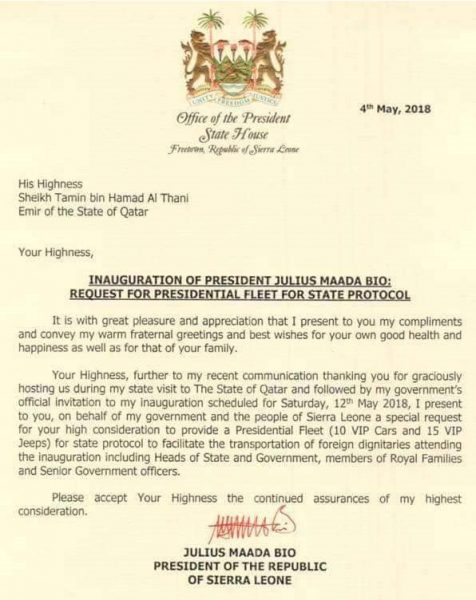 So what do you hope to gain as a Sierra Leonean by displaying to the whole world how your government begged luxuries from the gulf state of Qatar during the past presidential inauguration?  Is it not shameful and embarrassing for you even if you are in the opposition?  Of course it’s demeaning for all of us to see our president begging with cap in hands but we have to live with it because we are wretchedly poor.

Such unpatriotic acts became a political weapon in the past APC administration as media clips were being circulated showing how the then Minister of Social Welfare, Gender and Children Affairs, Hon. Moijue Kaikai and his Deputy, Mustapha Bai Attila, orally fought over state resources. Those clips were certainly published maliciously by civil servants who were much closed to them.  We also experienced the same in the hajj-gate affairs when recorded audios of prominent government opeartives went viral. Of course everyone would like to see corrupt officials prosecuted in a real court of law but not prematurely in the social media.

Even in highly democratic societies such as Germany, UK and United States there are lines of limitations for the civil servants as they are urged to maintain neutrality in national politics, protect state protocols and discharge their duties professionally, no matter which party is ruling.  Unlike in post conflict Sierra Leone, strategically placed civil servants are bent on displaying their disloyalty and loatheness for the ruling party simply because it’s not led by their favorite candidates or tribesmen, by undermining the very administration that pays them. Since Bio became president of our republic only  few documents signed by him didn’t appear in public domain.  Those disgruntled civil servants have failed to realize the fact that even if they hate Bio and SLPP to the bone, Sierra Leone is all that we have; and displaying confidential government correspondences for public perusal doesn’t actually reverse the results of our last elections. Until the years2023 Bio shall remain president for good.

Finally but not the least, president Bio should know that the Sierra Leonean electorates voted for a government that they hoped could bring about positive social changes and sustainable development, and not the one that can run state affairs in the social media.  He should therefore put in place stringent measures to stop this kind of childish and misguided acts in the civil service.

I was just thinking out of the box