Long after President Maada Bio, his SLPP Party and government would have vacated the seat of power, historians would go to work; and his government would be remembered for many things.  His government would be remembered as one that took the reigns of power from an APC party, and boldly declared that it inherited near empty coffers. It will be remembered as the party that took an oath and swore blind to fight and rid the country of corruption. Among other things like strengthening the muscle of the ACC and conceiving the birth of another Commission of Inquiry, plugging the leakages has since become the trademark of his tenure. Fighting corruption, especially in the context of an African country; where corruption is so entrenched that any attempt to fight against it may appear a treasonable offence, is a tough ask.  It is therefore not surprising that Bio’s pledge to fight corruption has placed his government under more scrutiny than ever.

No one is pretending that corruption is the monopoly of African societies in general or Sierra Leone in particular.  Corruption is a universal disease which can never be eradicated but reduced.  In every given society, corruption is manifested in various shapes and sizes. The difference lies in the systems put in place to tackle or reduce the tendency or propensity for corruption to thrive. Unfortunately, and sadly enough, our society sleep walked itself into a system that authorises corruption and a moral code that glorifies it; “Usai den tie cow……”  If we are to fight corruption, then ACCOUNTABILITY should be high on our agenda. That is the difference on how corruption is tackled from one country to another, from one society to another and from one individual to another. But most importantly, it is down to how individual societies relate to and see corruption.

With the fight against corruption at the top of President Bio’ agenda, many would not only want to see corruption tackled, but be seen to be tackled. His oath to fight corruption does not make his government saintly or beyond reproach. We know that some of his government officials have had their names and corruption allegations mentioned in the same sentence. There was this little matter of the $1.5 million deposit that continues to waffle in the air. In spite of all these, the most recent one, which has since been christened as “chinagate” has understandably raised a lot of eyebrows. Interestingly, the responses and opinions vary, and sadly determined by individual political persuasions. 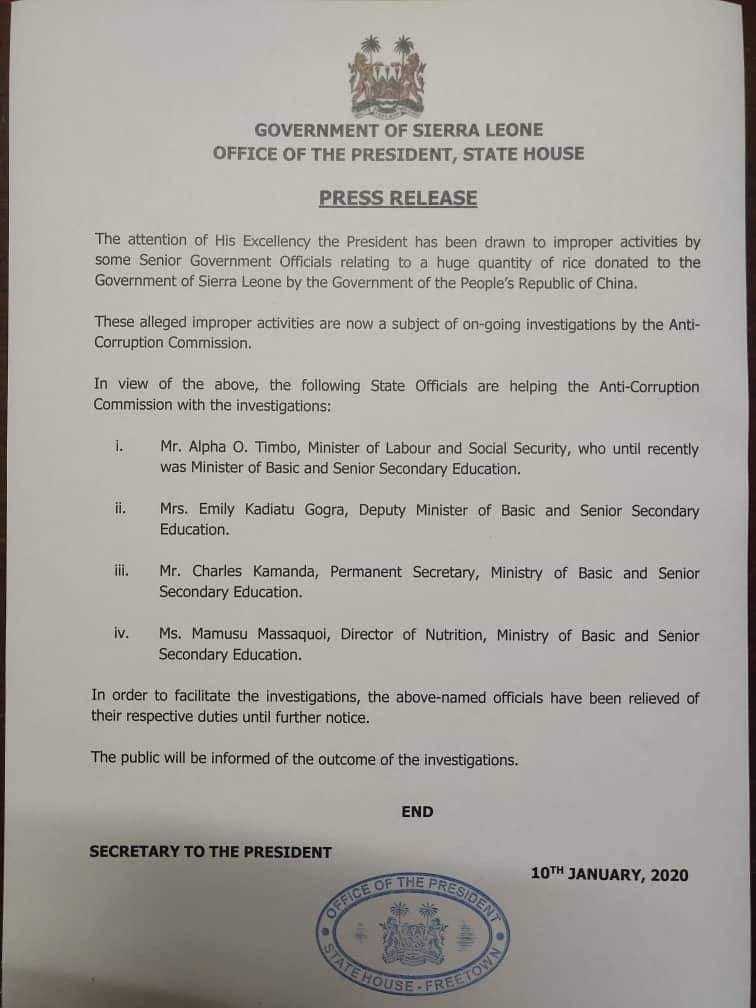 As usual, this has been seen through different prisms. Some see the sacking as a positive step and others see the “chinagate” as a blot on Bio’s government. If you ask me, I am on the side of the positive brigade.  My only issue is whether you can sack someone on the strength of an “allegation”. One would expect due process of the law; where the individuals are found guilty, to effect the sacking. Or does the government know something that we don’t.

When former President Koroma was in power, he declared that there will be “no sacred cows” in his government.  In Temne, that meant that no one in his government would be insulated or protected against the law, if they rubbed the law the wrong way. So you be the judge. Let us agree that it was President Bio who appointed these people into positions of trust; to serve the people. Such decisions are based on a lot of considerations including trust, integrity, fairness etc. President Bio is responsible for his own decisions, but hardly for the actions and decisions of these or any other individuals. However, the actions, behaviour and decisions of these individuals or any other in his government would always saddle him with corporate responsibility.  This would by any moral, political or legal standards splash a blot on him and his government; by virtue of his position as the constitutional head.

In response to such an abrogation of responsibility, President Bio swiftly sacked the individuals involved. In any political setting, that should be hailed and applauded; irrespective of your political colouration. President Bio has shown in this case, that not even his own hand picked officials are immune to his fight against corruption. They are not a protected species or belong to the society for self preservation. He has demonstrated the true meaning of “no sacred cows in his shed”. No one is suggesting that president Bio is perfect, or he is heading a perfect government or system. But when he or his government does something of this nature, we should be honest enough to not only recognize but applaud it. That does not mean that he cannot take some responsibility for the behaviour of his ministers, but his response should be acknowledged. One can assign tasks, but cannot force people to be accountable; for accountability is an act of will. Perhaps, we should start seeing accountability as a measure of a leader’s height. Sorry Ndakay.

This is what we call accountability. When we elect officials to positions of authority, the electorate and the public must make them accountable and feel accountable to us. As a nation, we should accept responsibility for our actions, be accountable for our results and take ownership of our mistakes. If we want to ensure the economic and fiscal health of our nation, we should be equally prepared to restore responsibility and accountability. Accountability breeds responsibility; and that is the price of greatness. It is true that you cannot soar with eagles when you fly with crows. It is also true that one swallow does not make a season. But for God’s sake, let us agree to disagree; that the swift steps taken by Bio are one of the things our country needs. IF only we had such during the “Hajjgate”, “Timbergate” or “Ebolagate”. Maybe, just may be, you and me could afford a holiday in the Bahamas today.

But that should not blindside us into believing that President Bio’s government is whiter than white. We still have the small matter of that $1.5 Million that needs clarification or resolution.  Are the allegations true or not?  Leaving such matters unresolved could leave a cloud swirling around. If the government and especially President Bio is to tackle corruption, he should walk, or seen to walk the whole 9 yards. We cannot afford to cherry pick who gets the sword of Damocles on their necks. Anyone who tackles corruption must be ready to go all the way. There are no shortcuts.  Those who fight corruption should be clean, or seen to be clean themselves. We cannot afford to see corruption as an authority plus monopoly minus transparency.

So for now, let’s hail Bio for his bold step; even if it’s for 90 minutes only.