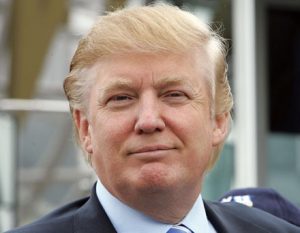 Donald Trump Donald Trump appeared to be the flavour of the month and had been flying high on the American political Richter scale. But it seems that either the wheels are coming off the rails or he may have danced himself lame, when the main dance is yet to come. His early approval rating is nothing short of what some will associate with change, while others may see it as a flash in the pan. He has been a welcome break from the drab drivel that politicians are so notoriously known to spew day in day out. Trump has not only been a point of departure from the status   quo, but has brought a breath of fresh air to the political discourse. Unfortunately for him, his contribution to the debate will only count for comedy value; if the recent Republican Party debate is anything to go by.

We don’t need to go far back in history to recall the kind of fanfare that greeted the introduction of Sarah Palin, when senator McCain gave her a ride on the Republican Presidential ticket, and Republicans have never forgiven McCain for that. Her gender seemed to be the only good thing going for her in political terms.  For God’s sake, this was the woman who reportedly said, “The people don’t elect U.S. presidents, God does”. She lives in the United States of America, but believed in “DIVIDED” States of America. During her initial foray into the political jungle of the American landscape, it was downright comical to see how she was hurriedly hustled through photo opportunities, kept from doing interviews, and hidden from reporters by the Republican- friendly press pack.

In the initial stages, she was very good at reading from Teleprompters, especially in front of conservative supporters. She was the darling of the Republican ticket who was going to land the White House. But in her first teleprompter-free interview, it was so easy to peel the veneer of “the lipstick mum” façade. Many came to realise why she had been kept quarantined from the media all that while. In short, she came across as uninformed and inarticulate. She was just another girl next door, who hadn’t the foggiest of what she was up against. She was brave though; give her that, but this was a bridge too far.  She came across as more suited to the ecclesiastical persuasion

It looks like one comes along every 8 years, and this time, it is Donald Trump. There seems to be a similarity here with Trump, although he comes across as more brash and a rabble rouser. With Trump, what you see is what you get. He has been hitting high notes with controversial statements since he made his intentions clear. He has been seen as the man to beat for the Republican ticket to the White House. Trump has made sure that he has been hugging the headlines with his comments about Latinos, women, everything and everything. Even the modern day American hero, Senator John McCain has not been spared. To his credit though, and in a series of tweets, Trump said that “political correctness is killing our country. “Weakness”. “So many politically correct fools in our country. We have to get back to work, stop wasting time and energy on nonsense”.

Love him or loathe him, this man speaks from the heart. That and that alone is enough to put him out of the race; as that was mistake number 1. Trump has already failed to grasp one of the necessary white blood cells that make up a successful politician. You have to be or appear to be “politically correct”, if not all the time. Politicians have been known to have the propensity to be everything to every man, every time. They support issues that even go against every artery in their body. They are adept at following the changing tide of times. Take President Obama for example. In 2008, he said, “I believe marriage is between a man and a woman. I am not in favour of gay marriage”. That was before he became the President of the United States of America. In May 9, 2012, “I have been going through an evolution on the issue. I have just concluded that for me personally it is important for me to go ahead and affirm that I think same –sex couples should be able to get married”. That was when he was into his second term in office as president.

Across the pond in the UK, the British Prime Minister, David Cameron previously opposed the repeal of Section 28 legislation, which banned local authorities from promoting the acceptability of homosexuality. In 2000, and while in opposition he accused the then Labour Prime Minister Tony Blair of being against family values and of pursuing the “promotion of homosexuality in schools”. In 2003, he was elected as Conservative leader and later voted in favour of civil partnerships. So Mr. Trump could learn a lesson or two from these political stalwarts; that “political correctness” is the oxygen of politicians, and that “only God and fools don’t change”. Donald Trump may not be your ideal politician, but he is genuine and speaks from the heart. He comes across as a plausible zealot that is bursting at the seams to make his views known. That is what makes him different. He is honest, but at what cost?

The problem with the Trump camp is that he has already successfully marginalised two groups of the American populace that any American politician can ill afford; the Latinos and women. Just ask Obama. If the recently held Republican debate is anything to go by, Donald Trump will need a political life support machine to survive this race. For starters, this was an in- house and intra-Republican party affair; and it was fought in an atmosphere of friendly fire. So what will happen if for argument sake, Trump wins the Republican nomination and the debate goes tribal with the Democrats? What happens when the political archaeologists take their spades and get to work into his past?

There is an African saying that if you want to know your real genealogy, contest the position of chieftaincy (translated). Ask Obama. It was not surprising that Obama could not resist the urge to take a swipe at his detractors when he visited Kenya recently. He said that some folks back home would interpret his visit as a trip to look for his birth certificate.

Donald Trump had given some Republican Party supporters a fresh hope for the White house, but  his “blood” comment about Megyn Kelly has understandably drawn outrage; leaving many Republicans to question whether Trump is the real deal. We know that politicians have the tendency to put their foot in their mouths once every blue moon. What makes his position scary for some people is that, despite given the opportunity to clarify or apologise for his comments, Trump and his camp have refused to even acknowledge the gaff.  That is a scary trait in someone who wants to lead the modern world. It is no wonder that some Republicans are now in a hurry to distance themselves from him. Trump was dumped from the “Red state meeting”; a meeting that could have given him one of the best platforms to get closer to the core of the Republican Party. He has blown that chance, because of his recalcitrance to repent or even admit that he spoke out of term.

Will he be able to survive, after showing a chink in his armour? Judging by the debate last week, he may have unconsciously shown that he lacks the thick skin that all politicians are expected to get. He has shown how easy it is to get under his skin, and how easy it is to get him rankled.  Will he be able to deal with the complex issues of foreign policy, the economy, civil rights etc.? Can he get the women and Latino votes back on side? Tough ask.

Like him or loathe him, Trump is an honest, and he is anything but a politician. He has shown his lack of the rudimentary aspects of politics. Some may say that he speaks from the heart, but too honest to be a politician. If anything can be taken from the debate, Trump has shown that he is a maverick, an eccentric and a plausible zealot. The question the American voter should be grappling is whether he can be trusted. We know that when America sneezes, the world catches cold. So can the Americans trust him with the world’s economy? Donald Trump’s view about foreign policy makes George W. Bush look like the Dalia Lama. Can he be trusted with world peace; especially at a time when Obama and the whole world, with the exception of Israel and the usual suspects, have recently shoved Iran into a little corner to put its nuclear threat in check? Can he be trusted with the nuclear button? Trump, you are fired.

Hillary Clinton will be wishing Trump gets the Republican ticket.