When the three Wise men visited baby Jesus at this time of the year, they brought with them gold, frankincense and myrrh.  The three gifts had a spiritual meaning: gold as a symbol of kingship on earth, frankincense (incense) as a symbol of deity, and myrrh embalming oil) as a symbol of death; life’s phases.  So when Donald Trump visited Obama at The White House, following his near impossible and apocalyptic triumph in the recently concluded presidential elections, Obama said after the meeting, “It is no secret that the President-elect and I had some pretty significant differences,” I have instructed my team to follow the example that President Bush’s team set eight years ago and work as hard as we can to make sure this is a successful transition for the President-elect.” “We are all rooting for his success in uniting and leading the country,” But if the events of last week are anything to go by, it looks like the transition will be anything but “smooth”

Last week, Obama decided to have the U.S. abstain from a United Nations Security Council vote on a resolution condemning Israeli settlement activity, which allowed the measure to pass. The vote angered Israeli leaders, who accused senior U.S. officials of complicity in drafting the resolution, a claim disputed by the U.S. Trump’s postings came just before Secretary of State John F. Kerry delivered a major address on U.S. foreign policy that included a rebuttal to Israeli government criticisms of the Obama administration. Understandably, Trump’s statement of support for Israel was welcomed by Prime Minister Benjamin Netanyahu, who has long had a tense relationship with Obama. As if that was not enough, the Obama administration on Thursday announced its retaliation for Russian efforts to interfere with the US presidential election, ordering sweeping new sanctions that included the expulsion of 35 Russians. 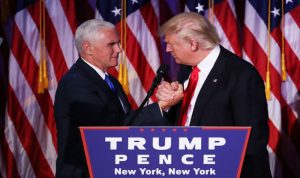 A senior official said. “One reason why I think it is necessary to sustain these actions is because there’s every reason to believe Russia will interfere with future US elections.” Russian authorities have, on Thursday ordered the Anglo-American School of Moscow, which serves the children of US, British and Canadian embassy personnel, closed. Russia has gone to town by expelling 35 US Diplomats in a tit for tat political gymnastics.

It is no secret that throughout his campaign, Trump had always been associated with links to the Russian political machinery and oligarchs. From money laundering, to hacks, business ties and so forth, allegations of Trump and Putin being separated at birth, had been relentless. The two men had occasionally expressed their mutual admiration and bromance for each other. With Russia being the archetypal enemy of the USA, it was just a matter of time to see how this plays out with the incoming President of the free world. With barely 3 weeks to the inauguration, Trump could not have wished for a worse platform to start his political odyssey “To Make America Great Again” He has just been “three-footed” by Obama.

We all know that one of Trump’s main political mantras was to “MAKE AMERICA GREAT AGAIN”. During his campaign, he accused the Obama administration of making America look weak, in the eyes of the world. He preached tough arm tactics from trade, nuclear arms, immigration, border security, terrorism and even his dealings with ISIS. Among others, his tough man mantras appealed to his followers who hung on his every word. Not surprisingly, it took only 72 hours for him to start renegading on his promises; much to the disappointment of his supporters. Eleven million illegal aliens became “3 million”, the Wall became “fence and wall”, and lock her up morphed into “they are good people” .Now that Obama has bequeathed these two political hand grenades on his lap, the world is waiting to see if Trump will talk the talk and walk the walk. 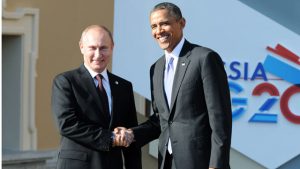 With Obama taking an unprecedented hard-line stance against Russia on Thursday, will Trump roll back the sanctions and expulsions? Many will see Obama’s recent action as in line with Trump’s vaunted mantra to “MAKE AMERICA GREAT AGAIN”; to make America look strong in the eyes of the world. The Speaker of the House Paul Ryan applauded the move, although he described it as overdue. Obama may agree and say, “Better late than never”. A senior Russian official called the expulsions as “the death throes of political corpses”. But considering Trump’s professed relationship with Putin, the question is whether Trump will keep the status quo or undo all of it. The irony is that, Obama has left Trump between the devil and the deep blue sea. Will he stick or twist? To go with Obama’s edits will mean a significant damage to his relations with his Russian cousin. If he dismantles this political stance, many will see him as weak and all talk. So what does he do here? Be ready for the unconventional political correctness.

The other political hot potato on Trump’s lap is the recent UN resolution condemning Israel for violating international law with its policy of building settlements on occupied Palestinian territory. The UK has never hidden its support for the UN resolution, and it is not surprising that the UK has been accused of having its fingerprints all over the text of the resolution. Israel’s ambassador to the US, Ron Dermer, speaking to the US media this week, said: “This is not a text that was formulated by the Palestinians or Egypt, but by a western power.” He stopped short of pointing the finger at the UK or US. We all know that Israel has traditionally been the step child of the US. But Obama’s Christmas gift to the Israeli’s seems to be a break from tradition. The UK support for the UN resolution has already led to reports that a tentatively planned meeting between Theresa May and Netanyahu scheduled for Davos international summit this month has been cancelled.

There have been allegations of the US “Secretly cooking up with Palestinians an extreme anti-Israeli resolution”. President-elect Donald Trump tweeted messages on Wednesday, showing his support for Israel and accusing President Obama of making inflammatory statements and damaging relations between Israel and the United States. Trump tweeted that he could no longer allow Israel to be treated with disdain and urged Israel to “stay strong” until he takes office on Jan. 20. In response Wednesday, Prime Minister Benjamin Netanyahu tweeted: “President-elect Trump, thank you for your warm friendship and your clear-cut support for Israel!” The tweet included Israeli and U.S. flags and tagged two of Trump’s children, Ivanka Trump and Donald Trump Jr.

As the year comes to an end with Obama’s historic administration, another is unfolding with unprecedented political gridlocks along the way for Donald Trump. Trump has his work cut out for him. As we welcome the New Year, sit tight and be ready for a whole new World Order of political rigmarole. As for the Syrian crisis, the less said the better. With Trump at the helm, it’s time to put on your political shock proof vest. Who said that they were going” to make sure this is a successful transition for the President-elect.?”