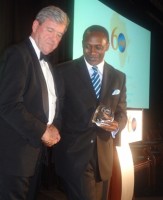 "The presence of so many people attending the gala demonstrates strong support for the Africa-America Institute.  For 60 years, our focus has always been on education: education for Africans, and about Africa," said Kofi Appenteng, chair of The Africa-America Institute Board of Trustees and co-founder and partner of the Ghana-based West Africa Fund.

During the Award Gala, which took place on 25 September 2013, Amini Kajunju, President and Chief Executive Officer of AAI said, "This evening the African Union (AU) will receive the first-ever AAI Institutional Legacy Award.  AAI has worked alongside the Organization of African Unity/African Union since its inception 50 years ago.  Together, we supported the liberation of African countries and fostered development, peace and security in Africa.  Today, we celebrate the shared experience of bringing a new continent to life."

Carlton Masters, Jamaica’s First Representative and Special Envoy to The African Union and President and CEO of the GoodWorks International presented the Award to the Chairperson of the African Union Commission Dr. Nkosazana Dlamini Zuma.

Accepting the award, Dr. Dlamini Zuma, thanked AAI for its steadfast support to the continent over the last 50 years. She noted, amongst others, the very important role it has been playing in the education and skills training for Africans, and expressed the desire to see AAI join in the skills revolution in every sector, over the next 50 years.

Three other awardees shared their vision for the continent, as they each accepted the awards. The other awards were the "2013 AAI Distinguished Alumnus Award" conferred on Dr. Kandeh Yumkella, and AAI Alumni who is currently the Special Representative of the UN Secretary-General and CEO of Sustainable Energy for All. The "2013 AAI Leadership Award in Business and Philanthropy" awarded to Tony O. Elumelu, Chairman of Heirs Holdings and Founder of the Tony Elumelu Foundation. While Chevron received the "2013 AAI Corporate Award," received by Ali Moshiri, Chevron's President for Africa and Latin America.

A press briefing with the four awardees and presided by Mr. Ben Dotsei Malor, Chief Executive Producer of UN Radio kicked off the five hours ceremony.

The singing of the AU Anthem at the beginning of the event, a projection of the OAU-AU 50th anniversary documentary and a musical interlude by South African-born entertainer, Thuli Dimakude spiced up the gala night.

The Prime Minister of the Federal Democratic Republic of Ethiopia, current Chairperson of the African Union, Mr. Hailemariam Desalegn, delivered a "Conversation about Africa's past, present and future," and participated in an interactive dialogue with Namibia's President, Hifikepunye Pohamba and the Ministers of Foreign Affairs from Ghana Hannah Serwaa Tetteh and Tanzania’s Mr. Bernard Kamilius Membe.

An exclusive interactive dialogue also moderated by Mr. Malor afforded these leaders the opportunity to respond to questions from the audience mainly sharing their vision for the continent in the next 50 years.

During a brief telephone interview from his UN Radio, office in Midtown Manhattan Tuesday Mr. Malor provided the following statement on the highlights of the press briefing and the interactive dialogue “A Conversation on Africa’s past, present and future.”

“I think the sense of optimism among the participants at this event put the fact that it seems the tide is in favor of promising Africa with a lot of potential with a lot of prospect.  The economies are the fastest growing economy in the world, now a good number of them are in Africa.

“If you look at the population demographics, a lot of young people are going to be in the continent, employment opportunities are opening up more.  And so the questions I put to these leaders, the first is the urgent need to develop a human capital, human capital in terms of investing in people getting the best for people, I think that was one major thing that came out of the discussions.”

Number one, you can say that they were very astute, brilliant and knowledgeable leaders, who put across a case for the continent.  As Dr Nokasazana Dlamini-Zuma, the Chair of the African Union Commission said, a narrative of the entire continent must change.   Of course, Africa is not a country; Africa is a continent of 50 class nations.

Number 2, she stressed upon that Africans and African media must begin to tell the story not denying the challenges, acknowledging the challenges but a whole lot of good things that are there are not reported.

“The third thing that came out of these discussions is that African nations are not looking for charity.”

“They want partnerships, they are not looking for handouts they want hands of partnership so they could be developed and reach the status of a develop nation or even surpass that not just for their own sakes but for the sake of the whole world so these are very important things.”

“Also the natural resources of Africa must be well used.  How can value added at the source so that if you have raw material it is processed locally and not just exported abroad thereby generating more jobs and the diversification into the economies.   But again everything boils down to developing human capital and every other thing will fall into place.”

“There are successful developed nations in the world that do not have a fraction of the natural resources that you find in some African countries, so developing human capital is going to be key for the success and a fast development of many African nations.,” Mr. Malor concluded.

This year, the AU celebrates the 50th anniversary of the OAU-AU on the theme, "Pan-Africanism and African Renaissance," and embarks on a mission to realize a vision of an integrated and prosperous at peace with itself.