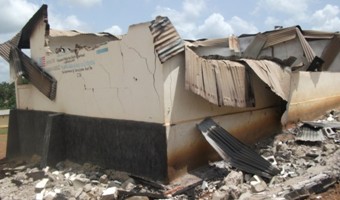 The structure hosted classes 5 A and B and 6 A and B, staff room and Headmaster’s office. Several documents and other materials needed to run the school were destroyed. The cause of the fire is still not known at the time of going to press but one of the security men at the Eastern Polytechnic compound said that they noticed the fire around 2am on that fateful night. College Practice School authorities were quoted as saying that the entire structure including the entire facility of the school has no electricity supply; so electrical fault has been ruled out. The disaster has provoked serious debate in and around Kenema.

The burning of the administrative building came at a time the educational sector of the country and Kenema District in particular is on the spotlight for the wrong reason.