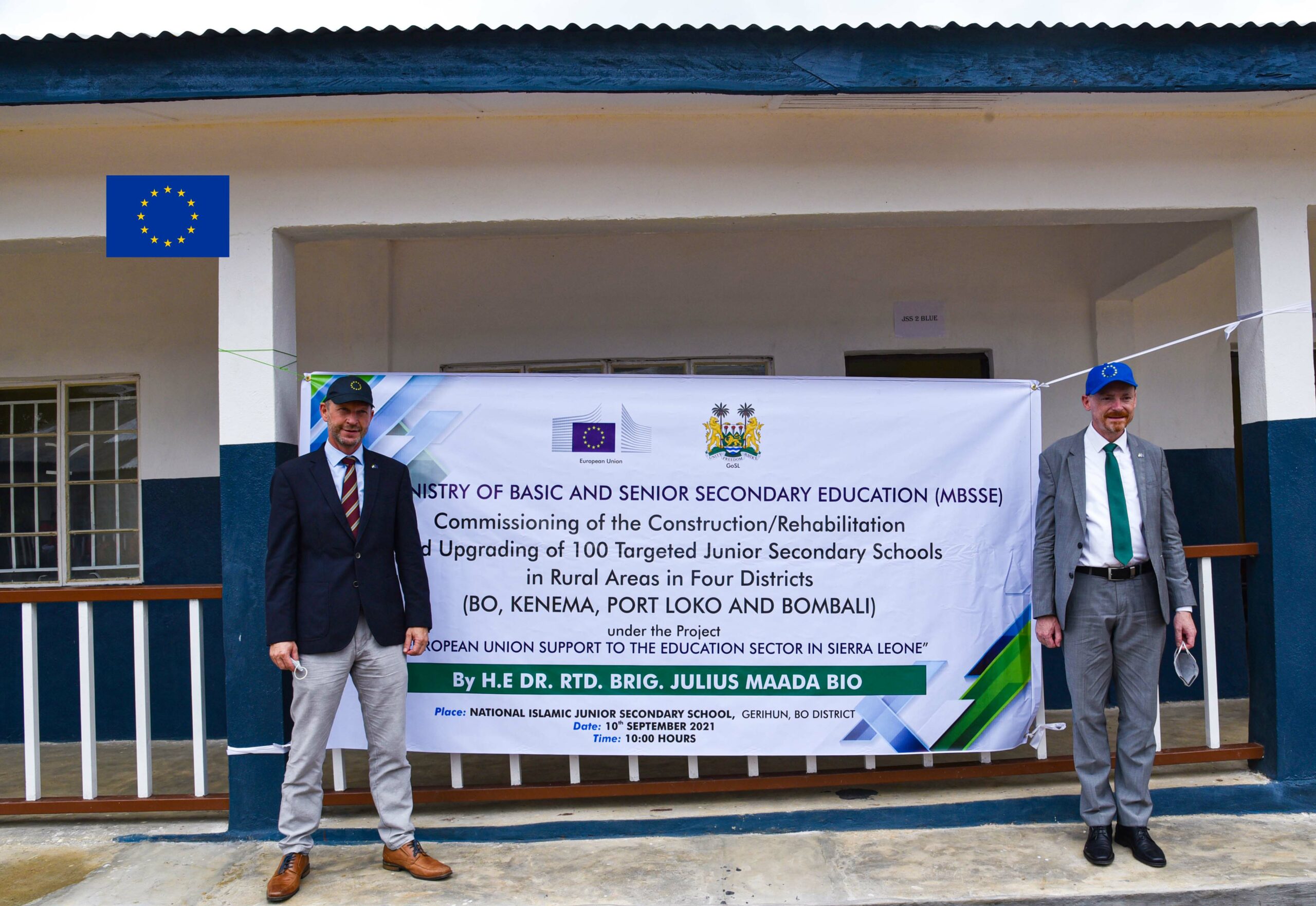 Ambassador Muller joined his Excellency President Julius Maada Bio, government officials, development partners and other dignitaries on Friday 10th September 2021, to commission the newly constructed school buildings and Library of the National Islamic Junior Secondary School in Gerihun, Baoma chiefdom in Bo district. The European Union provided funds through the National Authorising Office (NAO) for the construction/rehabilitation and upgrading of 100-targetedJunior Secondary Schools across the four regions in the rural areas including Bo, Kenema, Port Loko and Bombali districts under the project “EU Support to Education Project in Sierra Leone.”

Speaking at the event, The EU Ambassador said the EU and Sierra Leone are strategically investing in the future of school-going children, as education was so crucial to national development.

“Our support aims at improving equitable access to primary and secondary education in the country,” he said.

Ambassador Muller further mentioned that, human development is at the core of the European Union’s commitment towards achieving the Sustainable Development Goals (SDGs) by 2030, noting that investing in education and skills development, in particular for children, women and youth, is amongst the five priorities of the new European Union’s strategy with Africa.

He said the EU has been actively supporting the Government’s strategy to ensure free quality education for all, in line with its Medium -Term National Development Plan (2019-2023), which prioritises education and human capital development.

He said the EU and its Member States would continue to support Government’s efforts to strengthen national education systems and the quality of learning as well as skills development programmes, to support employability, entrepreneurship and income generation opportunities in particular for youth and women.

Ambassador Muller further mentioned that, through the European Union support to the Education Sector signed with the government in2016, aims at strengthening, institutional and human resources capacity to deliver quality educational services and targets key institutions like the Ministry of Basic and Secondary Education, Ministry of Tertiary and Higher Education, Teaching Service commission, or the District Education Offices.

The Director of the National Authorising Office, Ambrose James explained that the entire project started in 2019, but was delayed due to the outbreak of COVID-19. He said the EU provided the funds to support the Government’s flagship Free Quality Education Programme which aims to create access to education for children, expand on school facilities with the provision of science and computer laboratories, water and sanitation facilities, libraries and solar powered electricity facilities to improve learning environment.

He said the project entailed the rehabilitation and upgrading of 155 school buildings, 19 new buildings, 282 toilet facilities to cater for both boys and girls, 78 wells, 9 staff quarters and 50 solar units and laboratory equipment that would benefit 35,000 pupils including teachers and other school staff across 49 chiefdoms in the 4 regions of Sierras Leone.

Minister of Basic and Senior Secondary School Education (MBSSE), Dr David Moinina Sengeh, thanked the EU and other stakeholders for working together in achieving the project results. He stressed that the schools will significantly contribute to improving learning for the beneficiaries.

The Minister of Planning and Economic Development (MoPED) and also the National Authorising Officer of the 11th European Union Development Fund, Dr. Francis Kai-Kai said the event is a manifestation of the European Union’s contribution to support the Free Quality Education Programme with total funding of  7.75million Euros.

Addressing schoolchildren and community stakeholders at the event, President Bio welcomed Ambassador Muller to the country and especially the education sector, which he said lays a solid foundation for the sustainable socio-economic development of Sierra Leone.

The President Bio said his dream is to ensure every child get quality education irrespective of his/her family’s religion, region, ethnic or political affiliation, noting that as part of their radical inclusion policy, the ban on pregnant school girls was lifted  because he believes it was a discriminatory and it discourages girls from continuing their education after giving birth.