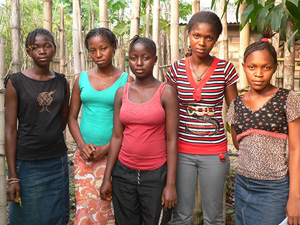 Culled from IRIN, Freetown- Campaigns to lower the rate of female genital mutilation/cutting (FGM/C) in Sierra Leone are having some impact, but efforts to ban the practice have failed thus far, and despite a push to communicate its health risks, many still believe FGM/C promotes good health and hygiene.

A bill outlawing FGM/C was withdrawn at the last minute in June 2007 – and has not been reintroduced.

Politically, it is difficult to ban FGM/C in a country in which over 60 percent of women of voting age have undergone the practice, says renowned local anti-FGM/C campaigner Olayinka Koso-Thomas.

But despite this MOU, the practice continues in many of these districts. This is partly due to the strength of `soweis’ – the heads of secret societies that girls enter upon undergoing FGM/C – who depend on performing FMG/C for their livelihoods, sometimes earning as much as US$200 per child.

If they stopped performing FMG/C their incomes would dry up, they told IRIN.

Many `soweis’ have enormous influence in their communities, and the secret societies to which they belong (Bondo Societies) are intact, with a respected hierarchy.

It is also quite common to see masked women (commonly called “Bondo devils”) in their traditional red and white, at political rallies and/or dancing for the president, a political party or a candidate. This indicates that secret societies are still a force to be reckoned with, and something political parties tamper with at their peril.

“It would be suicidal to call for an immediate ban on FGM/C,” according to campaigner Olayinka Koso-Thomas.

While the new government hails the MOU as a milestone achievement, critics argue that it has not achieved much.

Ethnic groups like the Soso perform FGM/C on the girl child 40 days after birth, says Koso-Thomas. To enforce the MOU everywhere would be very difficult considering the high illiteracy rate in Sierra Leone.

“The issue of FGM/C is sensitive. If those advocating against FGM/C win, we will join them later. But if they lose, we will support our people. We cannot afford to lose our ballots because of putting a ban on FGM/C of the girl child,” said a leading politician from the ruling All People’s Congress party.

Even top politicians, it seems, are wary: “Let the people in civil society deal with this issue of FGM/C,” President Ernest Bai Koroma said in a November press conference.

Civil society focuses on the health risks of FGM/C, with efforts made to raise awareness of the practice in terms of maternal health, HIV/AIDS, and obstetric fistula.

FGM/C is a procedure that involves partial clitoridectomy or total removal (labiadectony) of the external female genitalia. Excessive bleeding, septic shock, difficulty in passing urine and infections are not uncommon immediate results of the procedure.

According to a World Health Organization (WHO) study, some 40 percent of women who have undergone FGM/C in Sierra Leone are likely to see their babies die.

At Aberdeen Women’s Centre in Freetown, where treatment of fistula is free, 70 percent of women who attend for fistula treatment have undergone FGM/C.

Olayinka Koso-Thomas has been campaigning against the practice for nearly three decades. Her book entitled “Circumcision of Women: A Strategy for Eradication of Female Genital Mutilation in Sierra Leone”, was banned in 1987. “I’m not afraid to speak out against the practice… I believe it’s wrong. It’s a tradition that is… a devastating health hazard for these women,” she said.

But many women – particularly in rural areas – think FGM/C has health and hygiene benefits, say campaigners.

In 2005, the UN Children’s Fund (UNICEF) reported that 94 percent of women in Sierra Leone had undergone FGM/C. Five years later, the rate had dropped to 84 percent. Clearly, the campaign against FGM/C by international, national and community-based organizations, as well as donors and partners, has had an impact.

In the past four years, local NGO AMNet has brought community, district and national stakeholders together to try to break the communications gap between young and old on the issue.

It uses group work, simulations, games, and theatre, among other techniques, to encourage group and individual pledges by the community to bring an end to FGM/C.

“Focusing on FGM/C will enable girls to make informed consent choices and allow them to at least receive a high school education. Our strategy is that in the long run, girls will be fully knowledgeable on the effects of FGM/C, and may be able to resist pressure to become a member of a Bondo Society,” said Hawa Samai, AMNet’s national coordinator.

Sierra Leone’s high rates of teenage pregnancy and school drop-out are also linked to Bondo Societies, as once initiated many girls are considered ready for marriage.

Meanwhile, “UNFPA [the UN Population Fund] is supporting the Ministry of Social Welfare, Gender and Children’s Affairs and the Human Rights Commission in Sierra Leone to take a rights-based approach to their campaigning, by educating communities and FGM/C practitioners on the abusive nature of the practice, said Ratidzai Ndhlovu, UNFPA representative in Sierra Leone.

Sierra Leone’s 2007 child rights law forbids any practice that "dehumanizes or is injurious to the physical and mental welfare of a child".