All social indicators predict a short, miserable life
for those unlucky enough to be born Black males in America. 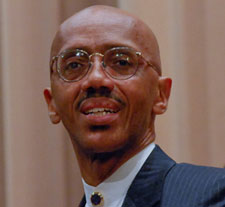 Welcome to America where too many young Black men live short, desperate, miserable, complicated and violent lives.  Recently a young Black man reported to the California General Assembly that the biggest challenge in his life was getting to school safely–not getting good grades or graduating from school, not wearing new clothes or even having a job, but just getting to school unscathed!  Simply staying alive for 21 years is the number-one concern for many young Black men whose actions and inactions are influenced by their dire sense of hopelessness.

Seemingly random negative obstacles facing Black males in America constitute nothing less than a well-crafted, highly orchestrated system of mass destruction for young Black men and boys.  Black men and boys are at the bottom of the educational system and the top of the criminal justice system.  Their life expectancy and health indicators are the lowest in America and they top the homicide and violent-injury statistics throughout the nation.  Black males also rank at the bottom in high-school and college-graduation rates and at the top of the official and unofficial unemployment rates.  All social indicators in America predict a short, miserable life for those unlucky enough to be born Black males in America.   To what extent do Americans know and care enough to stop this systematic genocide?

Here are three points of optimism for young Black men that you should know:

1) Red Tails is a movie produced by George Lucas of Star Wars fame.   It features young Black men as great patriots and American heroes who are intelligent, confident, disciplined and courageous.  Ordinarily, these are traits lauded in America, but apparently not so much when they are displayed by African American men.  It took Mr. Lucas 23 years to make this film, a film that Hollywood would not finance, support or distribute.  He eventually used his own money to produce and distribute it.  Red Tails should be required viewing, with a day away from classrooms, for every high school student in America because exposure to its social and historical lessons, not taught in school, will 1) influence and help transform Black boys into strong, positive, productive Black men, 2) help America appreciate the value of young Black men and 3) teach all Americans to be great patriots in our country.

2) The New Jim Crow, a recent book by Michelle Alexander, has become an instant classic and staple for college undergraduate and graduate classes in law, political science, sociology and history nationwide. It peels back the layers of modern, systematic racism that have led to more Black men in America being imprisoned in 2011 than there were Black people enslaved in America in 1850.  A new "caste" system of racial control also has more Black men imprisoned in the United States today than the combined number of people imprisoned in every other country worldwide. Yet there is optimism with the release of the paperback edition of The New Jim Crow.  People throughout the world must read this book because of its truth, passion, impatience, importance and power–like that found in such works as "Letter from a Birmingham Jail" and “Why We Can't Wait" by Dr. Martin Luther King, Jr.  Every high school and college around the world should make The New Jim Crow required reading for its students as a guide away from policies, programs and practices that render America a horrifically unjust and hypocritical place.

3) And finally, there is hope in the Black Male Achievement Movement, inspired by Open Society Foundations' Campaign for Black Male Achievement, which has helped organize thousands of Black men in 100 cities across America to address the issues that confront young Black men and boys every day in every city in America.  The men in this movement work in a concerted manner to produce comprehensive, well-thought out, workable solutions to the problems Black males face in America.  In January and February 2012, the Black Male Achievement Movement will mentor tens of thousands of young Black men and boys as a step toward improving their life chances.  Black men will teach Black boys how to build strong families, value and pursue education, start businesses in their communities, become better men of faith and abstain from negative behaviors that destroy our communities.

The problems that confront Black males in America are American problems.  While the actions of Black men must lead the way to fixing these problems, the courage and integrity of multitudes of Americans is essential.  We must realize, as stated in promotion materials for the movie Red Tails, "Courage has no color."  Let's get to work making America great for all of us and let’s invest in hope, cooperative action and opportunity for young Black men!

(Please call 773.285.9600 or email blackstar1000@ameritech.net for more information or to join the Black Male Achievement Movement).