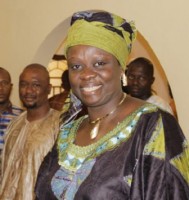 When Sylvia Blyden of the Awareness Times newspaper was appointed by the president, many observers interpreted the move as vintage tolerance and an anxiety to utilize all available resources to develop and transform the country.

The May 19th publication of Global Times breaks a new ground as it refers to the Special Executive Assistant (SEA) making a derogatory and disparaging statement of a neighboring sister state of Liberia, Ellen Johnson Sirleaf.

This statement to a significant extent discredits the mutual and friendly relations between the two countries, promoted by an executive aide to the president. The SEA has clearly become a loose cannon who needs to be contained to maintain any semblance of sanity in state governance.

The objectives of creating the position of SEA have clearly not been achieved because the occupier of the position completely misunderstands her roles (if any), especially the support she should provide in promoting worthwhile projects to benefit the nation, but instead fomenting confrontations with key partners in development like the media, civil society and vital partners within the seat of power, State House.

Readers are very aware of the anti-APC antics of this novice turn-coat journalist who has for the records ridiculed the president in all forms and made disparaging and untrue statements about the ruling party, manufacturing a caricature with horns and even invading his family and underwear privacies.

The State House Communications Unit is a media professional department which is fully aware of its mandate and responsibilities, within the framework of the overall government communications strategy and does not need to pull down any pretenders or authentic partners who are seeking to effectively and intelligently manage development and political information in peace, tolerance and the objective realities of the country.

But to put some sense in her, the State House Communications Unit is not in any way responsible for the media needs of the Defence Ministry and the ministry knows that. The Communications Unit has qualified and experienced professionals and they know their mandate and responsibilities. We are not like the self proclaimed doctor who does not know what she is doing. The Defence Ministry has its communications unit that caters for its specific public relations needs.

Without doubt, her presence at State House is likened to a loose rabid dog perpetrating diplomatic discord and political disrepute on the presidency.

State House Communications Unit is full of professionals who work as part of a team.

Frankly speaking, it is childish and quite premature for the pseudonym Mohamed Azonto Kamara whom with no reservation qualifies as quack journalist to refer to our reputable and well focused Communications Unit as an Epileptic Communications System.  Telling or directing our unit to exonerate the Defence Ministry is a clear manifestation of the pseudonym Mohamed Azonto Kamara’s naivity and ignorance.

The pseudonym Mohamed Azonto Kamara by every indication is being used by the SEA for her mischief and one may start wondering why a whole purported doctor is hiding behind a pseudonym. The unit is now providing learning opportunity for Mr. Azonto gratis to know that the Defence Ministry has its Communications Unit that is au fait with the ministry’s activities and therefore stands at better footing to exonerate the ministry in such a situation.

Only a myopic and quack like Mr. Azonto (the SEA) who can frivolously accuse State House Communications Unit, staffed by experienced personnel of not defending the Ministry of Defence in financial scam.

Mr. Azonto for very obvious reasons you should try to learn the profession in order that you know what to write and even what to say to avoid embarrassment. The practice of medicine and any other profession require sober and steady minds, and require the practitioners to know and appreciate their strengths and weaknesses