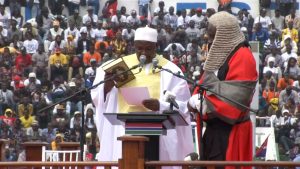 The euphoria that coursed through the veins of the Gambian people, following the delayed but eventual departure of former President Yahyah Jammeh is a well-earned respite for many in the country. The decision of the Gambian people to exercise their democratic rights, without a blood bath would be seen by many as a rare occurrence on the political landscape of Africa. This was a welcome relief; as Africa notoriously claims monopoly on dictatorship. Despite the efforts of organisations to promote good governance, the rule of law and democracy in general, Africa as a continent fails to step up to the plate. As a continent, we have a penchant to attract chaos in our political circles. Africa has a growing number of politicians who see the role of leadership as a god given right, once they take the reins of power. It is therefore not surprising that the continue boasts of the highest number of heads of states with the longest serving stints in power. Take the likes of Robert Mugabe who was the midwife of present day Zimbabwe, but has been in power since 1980. He celebrated his 93rd birthday just last month.  Instead of being in a nursing or retirement home, he still continues to cling to power, despite his perennial bouts with senility.  Others in this society for self –preservation include the likes of Yoweri Museveni (Uganda-36), Teodoro Obiang Nguema Mbasogo, (Equatorial Guinea-36), Jose Eduardo dos Santos (Angola-36), Mugabe (Zimbabwe-35), Paul Biya (Cameroon-29) and King Mswati III, (Swaziland-29).

The Mo Ibrahim Foundation is a philanthropic organisation that gives the “Ibrahim Prize” to all former African executive Heads of State or Government who have left their office during the last three calendar years (2014-2016), having been democratically elected and served their constitutionally mandated term. The value of the prize is $5million USD over ten years and $200,000 USD per year for life thereafter. But it looks like not even such a sweetener is enough to bell the cat. If one needed any proof that African leaders are genetically constructed to be power thirsty, look no further. Since its inception in 2006, only 5 leaders have won the prize. The last winner was 2014. It is not surprising that the Mo Ibrahim Foundation recently announced that there is no winner of the 2016 Ibrahim Prize for Achievement in African Leadership.

Nevertheless, the recent political shift in the Gambia has given us hope, and this has not escaped the attention of the foundation. On behalf of the foundation, Mo Ibrahim said that “We congratulate the Gambian people for the successful conclusion of a difficult electoral process and we salute the peaceful manner in which a potentially explosive situation has been resolved. We commend the efforts of ECOWAS which illustrate the value of meaningful regional integration in our continent. ECOWAS has already seen successful and peaceful transitions of power in Senegal, Nigeria, Benin, Cabo Verde and Ghana. We express our hope that this is the beginning of a new era in The Gambia that will promote increased socio-economic development based on respect for human rights, freedom of expression and the rule of law”.

There can be no greater endorsement of the expectations of the Gambian people. However, we must caution that for such transitions to take place, patience might just be the key. The expectations of Gambians from their new government are understandably skyrocket. Who can blame them, having survived a 22 year rule from one man? There are those who may expect all the woes of the country to disappear at the flick of a switch, and that they can live happily ever after. Gambians should be ready to accept that if change is to come to its people, time is a necessary ingredient of this political “benachin”. The Gambia has a new government in place. The coalition of political parties did not come about because these parties had mutual love for one another. It took a monumental amalgamation of differences to come together and oust President Jammeh; who had hitherto held a firm grip on power. Previous election results bear testament to that. For a collection of different parties to bury its differences and come together must have been made possible because of one denominator, and one denominator only: For the good of the Gambia.  The political civility that ensued among the coalition was not about being polite to each other. It was about reclaiming the power of the Gambian People’ to come together, debate the common good and bring Gambian democracy back to its highest values amid their differences.

So as Gambians prepare to head for the National Assembly elections in April, there are some people who are beginning to feel that the coalition is about to break at the seams; now that the objective of the coalition to oust Jammeh is mission accomplished. It is obvious that should the coalition continue to remain a coalition, then the Gambia will become a one party state by default. It is therefore imperative that a multi-party democracy prevails in the Gambia. In the absence of such a political atmosphere, the public may be left with little to be desired. Gambians should therefore remember that it required political expediency to morph into a coalition. It will require all the craftsmanship of political brinkmanship to steady the ship. In these trying times, one would expect a lot of political horse trading. The political dilemma that is facing the Gambia must be seen as more of a design challenge than otherwise.

The people of Gambia should be proud of their achievement. The implications of what happened on the political landscape of the country are not only confined to Gambia.  Like other countries before it, the rippling effects would be felt along the African shores. The hope is that Gambians will collectively work amicably, as they negotiate the political gridlocks that lie in their path to a peaceful road map. Gambians have done Africa proud. The task at hand is to maintain that same spirit of good will and strive for that common good that will steer the country from the doldrums of the political abyss under former president Jammeh. With politicians like Ahmed Mai Fatty and Halifa Sallah in their ranks, ( to name but a few), Gambians could be forgiven to hope, dream and wish that better days are ahead. The politicians, the electorate and all Gambians owe it not only to Gambia, but to all of Africa to make this new found phenomenon work.  The coalition was built on idealism which, can end up like a castle in the air if it is not based on a solid foundation of social and political realism. The hardest thing about any political campaign is how to win without proving that you are unworthy of winning.