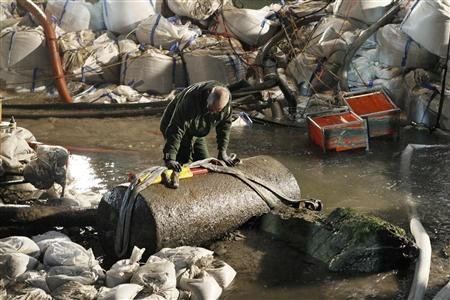 German bomb disposal experts successfully defused a 1.8-tonne unexploded World War Two bomb in the river Rhine on Sunday, after thousands of residents were evacuated from homes, hospitals and even a prison.

Germany is littered with unexploded U.S. and British bombs. But the British aerial mine defused on Sunday was one of the biggest found in the country, and its defusal caused disruption across the city of Koblenz.

Patients were rolled out of hospitals in wheelchairs and carried out on stretchers, shopping streets in the city centre were sealed off and even a prison was emptied. Sports halls were readied to accommodate residents for several hours.

The bomb was uncovered partly because of a fall in water levels after a dry November. It was in about 40 cm (16 inches) of water and surrounded by 350 sandbags.

"We have a British detonator which was surrounded by water for a long time and the explosives within the detonator react with water over time, which causes a high risk when the detonator is being removed," Ofenstein told Reuters Television.

In response to Nazi air raids on civilian targets in Poland and later London, the Allies dropped about 1.9 million tonnes of bombs on Germany in an effort to cripple German industry. The allied raids killed some 500,000 people.

Koblenz, located in western Germany at the picturesque intersection of the rivers Rhine and Mosel, was a target in 1944 and 1945. Most of the city was destroyed.