Albert Einstein, one of the famous German theoretical physicist once said: 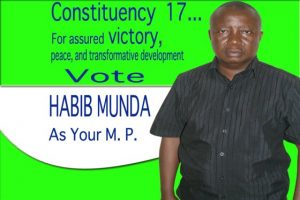 “whoever is careless with the truth in small matters cannot be trusted with important matters”; and Spencer Johnson, a famous American writer buttressed that by saying:  “integrity is telling myself the truth; and honesty is telling the truth to other people.”  So Ngo Habib, what do you think?  Are you telling the truth? Are you a man of integrity and self-esteem?

I heard that you fired a fickle shot at my shadow few days after my departure from Kenema using the opposition mouthpiece, Unity Newspaper. In your own words, it was a (mis)reaction to my publications against you.  Well, of course I don’t expect any Editor to grant his/her column to such a coward, ungrateful, arrogant and cunning man like you except the Unity that campaigned for your election to misrepresent our people.   If you were really a man enough who believes his pen like the Critique, why you never responded to my letter dated 9th April 2013 while I was still in the country? Copies of that letter were distributed right across Constituency 017 and each recipient, including Paramount Chefs, Town Chiefs, Pastors, Imams etc. eagerly called you to attention, but Ah Yah! arrogance and ungratefulness compounded by selfish, greed and wickedness never allowed you to pronounce the short but golden word: SORRY.  So this edition of my series about you is only going to address few funny sentences you shamelessly managed to express in your gibberish plot in the Unity Newspaper and If you really believe you are a man enough with strong fingers on the keyboard and  lot of readable vocabularies up stairs like the firebrand Critique, come over to the cyber space and see how prepared I’m to frog match you back to Doujo where you belong.

First and foremost, only those who do not know you can even have an iota of doubt in any of the facts I wrote about you.  But those who know you well are calling me on daily basis and furnishing me with more concrete information about you which I won’t like to publish here because you are intermittently claiming to be remotely related to that tiny village situated under the forested hill that separate Niawa and Barri, Kenema and Pujehun, South and Eastern province called Matakan where I was born and raised.  Are we related? I wish I know… But what I know for sure is the fact that you and I don’t share anything in common let alone I ever learn from or survive through you as you claimed in your vacillating diatribes in the Unity.

A paragraph like: “while I expressed willingness to foot the bill even though to the best of his knowledge  I never rode the vehicle on rugged routes nor did I inflict any damage  on it as they maliciously  alleged. I was shocked when they circumvented and came with a swollen bill twice the one previously agreed upon which I out-rightly rejected” sounds in my ears so shameful that I don’t even want to be associated with Constituency 017 till the end of your term in parliament. I still keep on asking myself why did you vie for the parliamentary seat, when infact, you could best represent your village, Doujo, at a storytelling contest or conning competition.  You are strenuously trying to tell your readers that I have requested from you more money than required that is why you refused to pay. But you are forgetting the fact that you used the vehicle for complete two months without paying a dime for it and I asked you at last to take it to the nearest garage for maintenance so that I can accept it back since you were absolutely cash-strapped after the elections.  So why didn’t I charge you $ 100 per day which is the usual hire price for jeeps in Freetown if I had really wanted to levy claims on you?  Are you not being ungrateful, Nogo Munda? Of course you fully well know the fact that since you seduced me into believing the falsehood that you were a man of honor in order to rescue yourself from the embarrassment of walking to tower hill, you disappeared into the thin air with our vehicle and never spoke to me or my uncle again. You even forgot about the official agreements signed between us; you stopped answering our calls, sms and emails and only resurfaced after parliament effected your desperately awaited allowances which you used to buy yourself a new vehicle leaving our own completely broken. What a callous man!

Ngo Munda, you refer to me as ungrateful man? Have I ever benefited in anyway, whether directly or indirectly, from your political games? Have I ever asked you for any favour or assistance? Have I ever eaten a loaf of bread at your Juba residence? Was I ever one of the Kamajors you led during the war in order to win yourself political recognition? Do you even know the path I walked till I get to where I’m today? And one last but very important question, have you forgotten what I did for you few days after elections when you were trapped in your tiny home at Blama?  Didn’t you send one of your bootlickers to my office in Kenema to collect from me the sum of Le 300,000 which you claimed you were going to use to fuel your vehicle not knowing that you were scavenging around for bus ticket back to Freetown? Didn’t you promise paying it back soon? Where is it now? What an ungrateful Muku politician!!!

If you are not really being economical with the truth why don’t you explain in detail what happened to the cooperative funds? The dollar/Leone transactions at the bank? The SLPP T-shirts? The allowances for party agents etc.? Shame on you Ngo Munda… I don’t need to waste much time with you because you are not my match on the keyboard. I only know that your grave is already dug and each edition I publish about you is hammering home dozens of irremovable nails into your coffin and you shall be definitely buried in the year 2017.  The clock is ticking…