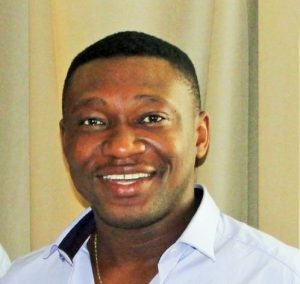 I arrived back in Berlin 2 hours ago after a very short but happy trip to the historic city of Rome, Italy.  Italy is the only major country within the EU region I had no opportunity to visit over the years and this was my first happy trip in the year 2016.

I’m glad that I was able to visit many famous places in Rome, including the Vatican. Sincerely, if I had only stopped at the airport I wouldn’t have come back home with any exiting story about Rome after a plain clothe police welcomed me at  the Ciampino Airport, barely five minutes after my arrival, with a motion that left me with mixed feelings about the Romans.

RYANAIR FR 135 was filled to capacity when it airborned with me from Schonefeld, Berlin by 5:45 Thursday morning and it landed by 7:35 at Ciampino in Rome. A tall man with a shiny silver badge on the neck which signified that he was not an angel but a plain clothe police, ushered all the new arrivals into the narrow gate to Rome except one… I was the one.  At the arrival gate was written “Arrival for Schengen Passengers” and no further check was required since this was an internal flight arriving from a Schengen member country.  I was handpicked by the man and asked to identify myself, which I did, but with an ordinary German ID.  He then insisted on seeing my passport while instigating a giant doberman dog to sniff into my luggage.   He then asked me several senseless questions that I never expected at the holy gate of Rome hence none was related to the Holy Bible. Questions such as what do you have in your luggage, why are you going to Rome, how long are you going to stay in Rome, how much money do you have on you were the opposites of my expectations. “Does a normal European needs a passport to come here? Does a European needs evidence of funding to enter Rome? Has there been any changes in the Italian policy overnight?” were the questions that kept him at bay as they told him that I was not the African he thought I was. Those questions told him that I was aware of the fact that a European citizen doesn’t need a passport to visit a member state and that a normal debit or credit card can keep someone alive for several months within the region. This unnecessary scrutiny targeting me, the only black man in the new arrival queue, taught me a bad lesson about Rome.  Every onlooker knew that I was only subjected to this scrutiny because of my black colour. This was a blatant RACIAL discrimination perpetrated at a gate that supposed to be holy and peaceful.  “So if this gate was the entrance to the plain clothe policeman’s parlour, he wouldn’t have allowed me in at all…” I wondered. 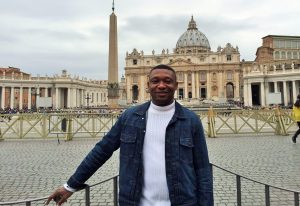 At my background is the Pope’s office in the Vatican

After dropping my luggage at Hotel Raffaello, I went on my first tour in the historic city of Rome.  I’m not a Christian though but my first attraction was the Vatican, where I learnt my second lesson in Rome.  This time round, I learnt that the historic adage which says “when you are in Rome, do as the Romans do” was true.  Three tourists (2 Nigerians, 1 American, I guess by their accents), who bought the metro tickets after me at the same counter, arrived at the Vatican gate with a bitter argument about the inhabitants of the catholic holy city. They were loudly condemning everyone living in the Vatican assuming that, according to records, only ten per  cent of them are regular worshipers. They further questioned why they should pay an entrance fees into the Vatican.  The security guards quickly asked them to leave the queue and direct their question to the Pope in an official letter. This marked the ending of their own trip to the Vatican.

The incidence reminded me about episode 1.16 of the Oscar winner series, Alias Agent, when the main character, Sydney Bristow, asked her CIA handler and secret boyfriend, Michael Vaughn, to help her retrieve the code key to Milo Rambaldi’s Prophecy which was hidden in a vault inside the Vatican. “Yeah, I will break into the Vatican with you” was Vaughn’s reply which shows that he could do anything for Sydney’s sake.

I smiled while walking through the queue into the Vatican. I didn’t break into it anyway. 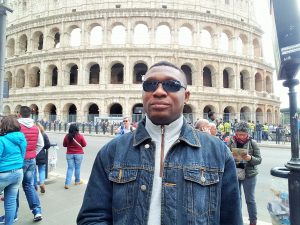 The huge structure at my back is the Colosseum

“Rome wasn’t built in a day” has ever been my favourite adage whenever I faced difficult tasks but I really came to believe it after I entered the Roman Colosseum. According to my tourist guide, the structure was built in 70 – 80 AD with 80 entrances/exits and it’s believed to be the largest amphitheatre ever built on our planet. The structure is 189 meters long, 156 meters wide, occupying a base area of 24,000 square metres (6 acres of land in Sierra Leonean term) and it is elliptical in shape.  The Gladiator, another Oscar winner action film, is based on some of the historic events that took place thousands of years ago in the Colosseum.

Selfie-stick! Selfie-stick! were the intermittent voices of fellow immigrants – mainly from Africa and Southeast Asia. Those I managed to talk to were Bangladeshis and Nigerians. They were fidgeting around the Colosseum, interrupting tourists with cheap Chinese products such as selfie-sticks and calved figures of important Roman historic monuments such as the Colosseum. 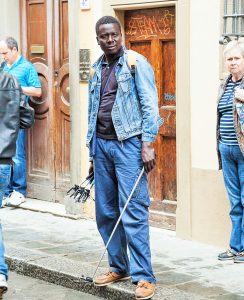 When I proportionately compared the number of selfie-stick vendors against the number of tourists who bought it, I realised that there are more preposterous vicissitudes in the EU region than a Sierra Leonean sorcerer could conjure.  I knew that if my fellow immigrants were the importers of those selfie-sticks, they wouldn’t have had the time to run after tourists with it for the rest of the day.  Therefore, they must be selling on commissions, as little as 1 Euro per stick.  The actual importers are sitting somewhere in their shops. That brings me to the questions: how many sticks are they able to sell per day? What about during winter period when the Roman streets shall be frozen and no tourists can fly to Rome? How much of the daily commission can they save per day? And how much of that can they send for their families at home who are supposedly proud and boastful of their existence in Europe? This is why, unfortunately, many colleagues hate me for being so blunt about life in Europe. The truth is, life is hard for many immigrants all over Europe, including Rome.

I arrived here more than a decade ago in search of economic safe heaven  and was able to claim a secured stay and working permit, but how many of the selfie-stick vendors are going to be fortunate like me? I have already witnessed countless number of unfortunate ones being deported disgracefully.

Except under the leadership of a tribalistic, regionalistic and tyrannical president, but no one can check me in the streets of Kenema for passports and financial sufficiency. Basic respects and fundamental freedoms, which are compound components of human value, degenerate to zero degree whenever one seeks economic refuge in a foreign land, most especially in Europe.

Is the above not a good reason why I should love Sierra Leone where I was born and raised?