When the world is rudderless with no one in control, the truth becomes frighteningly the first casualty.  A vacuum always ensues, when people fail to attribute incompetence to malevolence. It is that vacuum that becomes the midwife of most conspiracy theories. The COVID-19 pandemic has become the new normal of abnormality, and in trying to normalise the abnormal, truth has become the first casualty. It is therefore not surprising that with our lifestyle now being COVID-19 induced, conspiracy theories, fake news, politicking, cynicism, paranoia etc have ironically become the very ventilators and currency of our existence. There is no question about the origin of this pandemic; that it originated from Wuhan-China. Sadly, it is everywhere; WhatsApp, Facebook, twitter, Instagram CNN, BBC, etc.  Let’s face it, our lives mean COVID. (Abdulai Mansaray, author)

But as we continue to postulate on reasons, causes and modes of the pandemic, ranging from the biological, technological (5G) etc, information overload has become the modus operand. Even though the faith healers have gone into hiding, some have translated the pandemic as God’s sense of humour and His displeasure at the ways of the world. It is unquestionable that China is the world’s workshop, but no one imagined that the end of the world will be “made in China”. Where is your sense of humour?

Among the myriad of scenarios arising from the COVID issue, it has exposed the lack of world leadership, sense of direction and increasing insular approach to global corporation frighteningly alarming.  the lack of control on matters has been strikingly alarming. The worldwide problem has exposed the level of isolationism from world leaders; despite the pandemic nature of the problem. The vacuum of world leadership is palpable; hence everyman for himself. We know that self isolation and social distancing; in addition to other measures have been very effective in slowing down the virulence of COVID. But no one expected our leaders to apply such isolation across borders.

Unfortunately, we are witnessing the breakdown of global cooperation, as each country attempts to tackle the pandemic along national lines; for a virus that is global. It is obvious that the absence of such global leadership has created the vacuum, which the media attempts to populate. It is no wonder then that social media has increasingly become the chief ventilator for fake news, conspiracy theories and gaslighting that requires constant intubation.  A case in point is a recent social media audio clip from a fellow citizens.

The Sierra Leone High Commission in London was forced to issue a press release recently; in response to the COVID induced clip. Life imitates arts, and the truth can hurt when you want to believe a lie.  The increasing death toll has been a daily sermon in the media, attracting attention from all kinds of professionals and experts. A recent audio clip has been making the rounds on social media from Dr Taylor.  She stated that about 75 people with Sierra Leonean identities have died in London during this pandemic.  According to Dr Taylor, she tried to contact friends or relatives of one of the deceased, but it turned out that they denied any acquaintance with the individual. Judging by the audio, it is this response among others, that apparently prompted Dr Taylor to appeal to all Sierra Leoneans to “look out for each other”. She emphasised the need for Sierra Leoneans to keep in touch; well meaning. In effect, she was concerned that the 75 deceased will endure, a mass burial and that the chances of tracing and informing their relatives and family members may be buried with them. 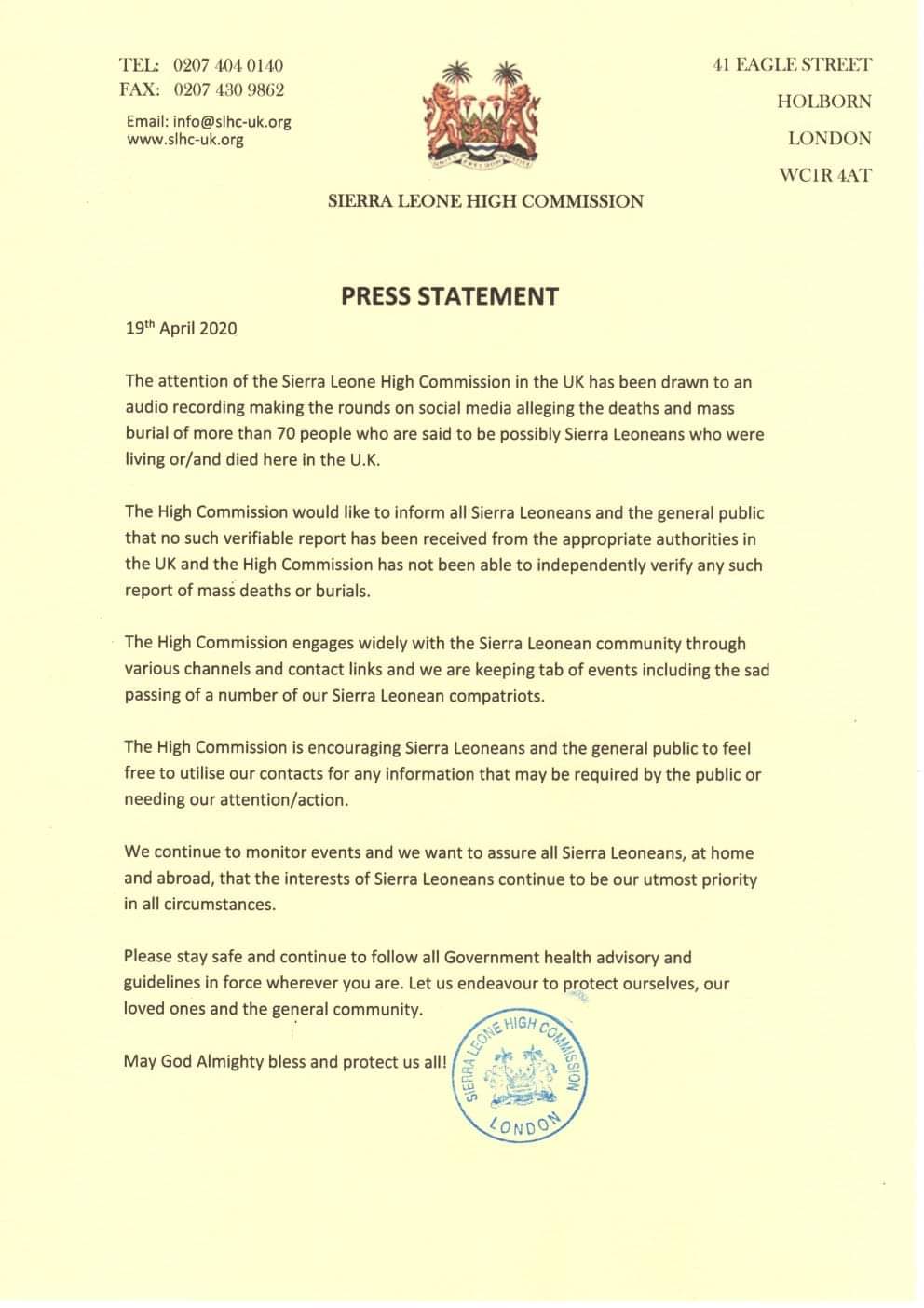 By all standards, this is a sad. Many have applauded Dr Taylor’s efforts and gesture for her “patriotism”. However, there has been an increasing chorus of observers and critics who have not only questioned the veracity of the story, but even the motive behind it. This is because of her patriotic efforts have raised more questions than answers. No one is questioning the thrust of her message: “to look out for each other” and “to keep in touch with others”. Many are questioning  her story. In the audio clip, she warned that these people are about to be buried in a mass grave, but also, stated that they have already been buried. Whether this is as a result of sequential publication is another matter.

But this begs the question as to whether the so-called deceased were really Sierra Leoneans in the first place. My little knowledge about Sierra Leoneans gives me the audacity to conclude that, there is no way you can have about 75 Sierra Leoneans dying in London unnoticed. Firstly, social media is constantly updated with news about such citizens when the undesirable happens. This goes on under normal circumstances. So, if 75 Sierra Leoneans should perish at the hands of the virus, at such a short space of time, you can bet that we would classify that as a “fankay” episode. We may short of many things and attributes, but congosa, password and talk about are not in that bracket (jokes). If that was the case, you know you wouldn’t miss it.

Even if we agree that these reported deaths were true, it raises the question of the identities of these casualties. Where these foreign nationals of African descent, masquerading with Sierra Leonean identities? Dr Taylor concludes that these people may have been illegal immigrants. But again, and if so, they may have been barred by the UK authorities from getting employment, opening bank accounts or sorting out some marital liaisons. But their immigration status would not have prevented them from having families, friends or relatives. You would expect their disappearance of at least 50% of them to be noticed by their contacts.

So, if they were not Sierra Leoneans; considering that the story is true, because this is beginning to sound like a story, where did they get their identities from. That’s a discussion for anther time. We already know about how our passports were prostituted by previous governments.

There is no doubt that this pandemic has brought the best and worst of humanity. Chief among such mischief is the threat of fake news, Computer Generated Images (CGI), false treatments, uncertified physicians (Tump and his Chloroquine), conspiracy theories and the lot. But as we continue to try and normalise the abnormal, we should guard against information overload, anxiety overdose, and the political weaponization of the pandemic. It could turn out to be the new WMD.

The hope is that the public will use common sense for a common enemy. But hey, pro-Trump supporters are protesting the lockdown in America; with some believing that the pandemic is a “political hoax” against Trump.  And true to form, they wear masks to protest the virus lockdown; which is a hoax. These are the same people who believe that zombies eat brains. In this case those protesters are safe. By the way, the Republic of Benin confirmed 200 cases with 300 recoveries; meaning Corona Virus owes them extra 100 sick people. Just laugh, its medicinal.

In the meantime, The Sierra Leone High Commission issued a press Release”  to inform all Sierra Leoneans that no such verifiable report has been received from the appropriate authorities in the UK and the High Commission has not been able to independently verify any such report of mass deaths or burials”. In addition, the Commission “is encouraging Sierra Leoneans and the general public to feel free to utilise our contacts for any information that may be required by the public or needing our attention/action”

Lockdown, like anywhere else is becoming painful in Sierra Leone. But it is the only vaccine we have for now.

Don’t forget to wash your hands and turn the lights off when you leave the room.