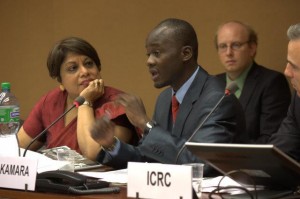 A United Nations backed Special Court for Sierra Leone in The Hague has found former Liberian leader Charles Taylor guilty of aiding and abetting war crimes during the Sierra Leone civil war. He was accused of backing rebels who killed tens of thousands including children during 10 years civil war.
The Special Court for Sierra Leone has again taken a major step which will help restore justice for children affected by the war in Sierra Leone. Another page has been turned in the history of justice for children. It is a historic moment for the children of Sierra Leone and across the world.
Children will live with the long-lasting impact of the war for the rest of their lives. The recruitment and use of children to fight wars is criminal. It is a war crime and a crime against humanity. In Sierra Leone, the war shattered the lives of my generation. It is not possible to replace ten years of a lost childhood but what children lost in the war – education, health, protection – must be restored to the extent possible.
When I was 11 years old, I was separated from my parents. I spent months hiding in the bush and moving from village to village to escape the rebels. I lost everything in a war I did not cause to happened, but I suffered the most. During the 10-year conflict, children had no rights. Children could not go to school, children had no access to doctors, children were victims of abuses and violations, and children had no access to justice. Children were used and abused by those who should have been protecting them.
There is no justice without children. When children are abused, justice brings hope and security for the present and future generations. In a conflict where children had no rights, justice is sometimes a child’s last hope.
The physical, social and economic costs of conflicts have impacted negatively on the lives of children and their communities limiting their access to services and their ability to realise their full potential. Many children in Sierra Leone are orphaned and left with deep emotional scars and trauma from direct exposure to violence, rape, displacement, poverty and the loss of loved ones. These coupled with the difficulty in accessing health and education services and a weak social structure to protect children have had a terrible impact on the lives of children.
So after the war, long-term rehabilitation must be given priority in all programmes, from psychosocial and trauma services to the provision of health, education and skills training. A child-sensitive approach to peace-building and reconciliation, and to transitional justice, such as the Truth and Reconciliation Commission in Sierra Leone, has helped uphold the rights of children. But it’s also necessary to implement programmes that address children needs and protect their rights.
There is an urgent need to design and implement reparations programmes that effectively target all children who have been affected by the war. International justice mechanisms must not only seek to hold perpetrators accountable, but must also seek to provide long-term support to victims who will otherwise continued to suffer if support is not provided.  In order to ensure that children benefit from reparations programmes, the Court should also consider reparations awards for children that fit into existing programmes currently being implemented by NGO’s and child-led organizations like the Children’s Forum Network  in Sierra Leone.
The Court must therefore work closely with the Government of Sierra Leone to ensure that they continue to support and facilitate the work of such organisations to help and support children affected by the war with an emphasis on girls and women, so that the Government will faithfully execute the awards made by the Court.
There is a great responsibility now to make sure that Sierra Leone’s future is not defined by the negative impact of the war and that the questions of child rights, democracy, justice and ending impunity are addressed fairly and fully. That rule of law is a significant contributor to that agenda. If perpetrators are not prosecuted it is harder to rebuild our country and restore respect for the rule of law.
The war is not over – there is still a war against girls and women who are suffering from sexual violence. Justice can provide a window of opportunity to address atrocities against girls and women.  Ending impunity for perpetrators of sexual violence would do a great deal to rebuild women's sense of community and belonging and to encourage their public engagement.
Yet this is still work in progress, we need more action to end impunity and prevent wars. We want a society without war, a society based on justice — justice that is fairly and fully implemented for children.
About the Author:
At age 14, Messeh Kamara helped establish a democratic child-led organization, and was elected national president of the Children’s Forum Network, which chaired the children’s inputs to the Sierra Leone Truth and Reconciliation Commission. He was the leading campaigner who presented the child rights agenda to the President of Sierra Leone and advocated tirelessly for the enactment of the Child Rights Act, adopted in 2007.  Messeh, now 24, is currently studying law in the United Kingdom, with the end objective of becoming an international human rights Lawyer.