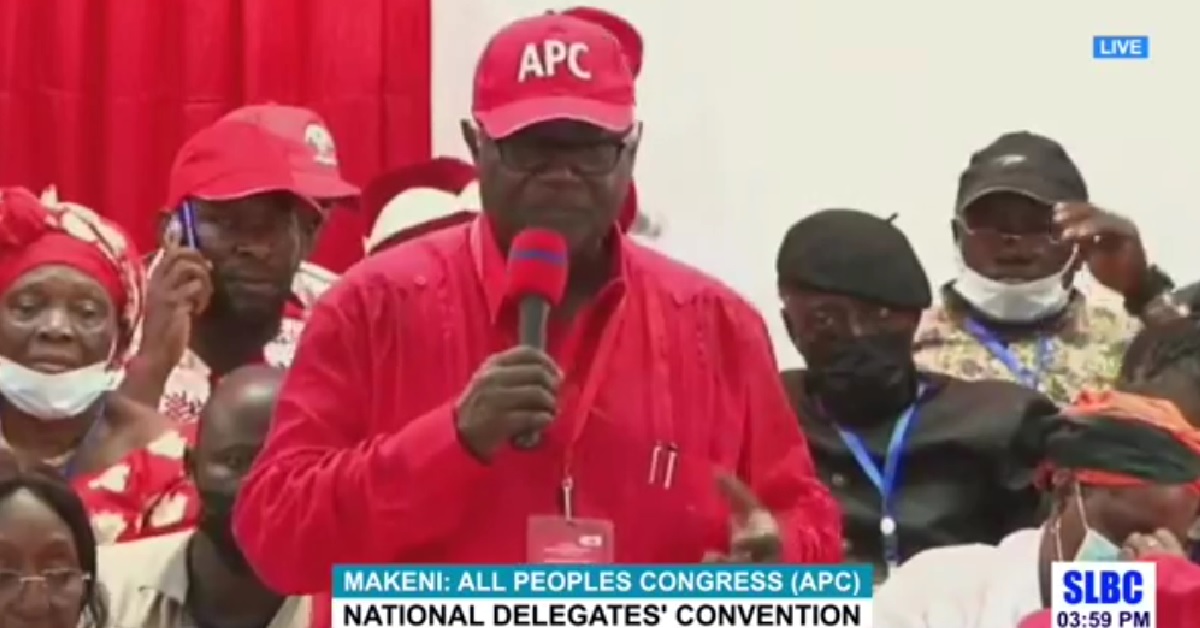 The consensus about the recently concluded APC national convention in Makeni is a resounding success. If truth be told, a lot of people were expecting the jamboree to be a disaster. But who can blame them? When you look at the backdrop against which the convention was held, you would be forgiven to expect a bloodbath, or at least, some blood on the carpet. Of course, members of the party opposite would have loved to see a failed outcome. The successful outcome of the convention is not only a success for the party but also for the nation. Every government needs an effective, viable and meaningful opposition; to avoid that country going down a repressive path. Since Maada Bio won the 2018 elections, the APC party has been experiencing withdrawal symptoms of being in charge. It is no secret that the party has been in disarray and all sail but no anchor.  Notwithstanding the infighting that ensued, the APC party had been engaged in self-mutilation for a long time.

President Bio is into his third year of his first term, and it took the whole three years for the APC party to get a semblance of political normalcy in place. Right from the SLPP victory, the APC found itself on the backfoot; having to defend itself for the “near bankrupt” coffers that the SLPP government claimed to have inherited. While those in the Red corner saw Bio’s assault on corruption and the causes of corruption as a witch hunt, tribalism or an attempt to decapitate the APC, others were comfortable with seeing it as a mere distraction.

The National Reformation Movement (NRM) mounted a series of lawsuits against the party. As the name implies, not only was this movement a protest at the status quo of the party but seems to have been aimed at reforms it felt as necessary. Central to its movement was the election or selection process of the candidacy for flagbearer, among others in the party. It goes without saying that the previous nomination of the Flagbearer Samura Kamara was single handedly taken by Ernest Koroma. There are some people in the party who believe that this action by Ernest Koroma was fundamentally responsible for their election loss. It was deemed as undemocratic and hence the clamour for change. The convention might have passed “successfully”, but there are still rumblings of pending lawsuits from the NRM. 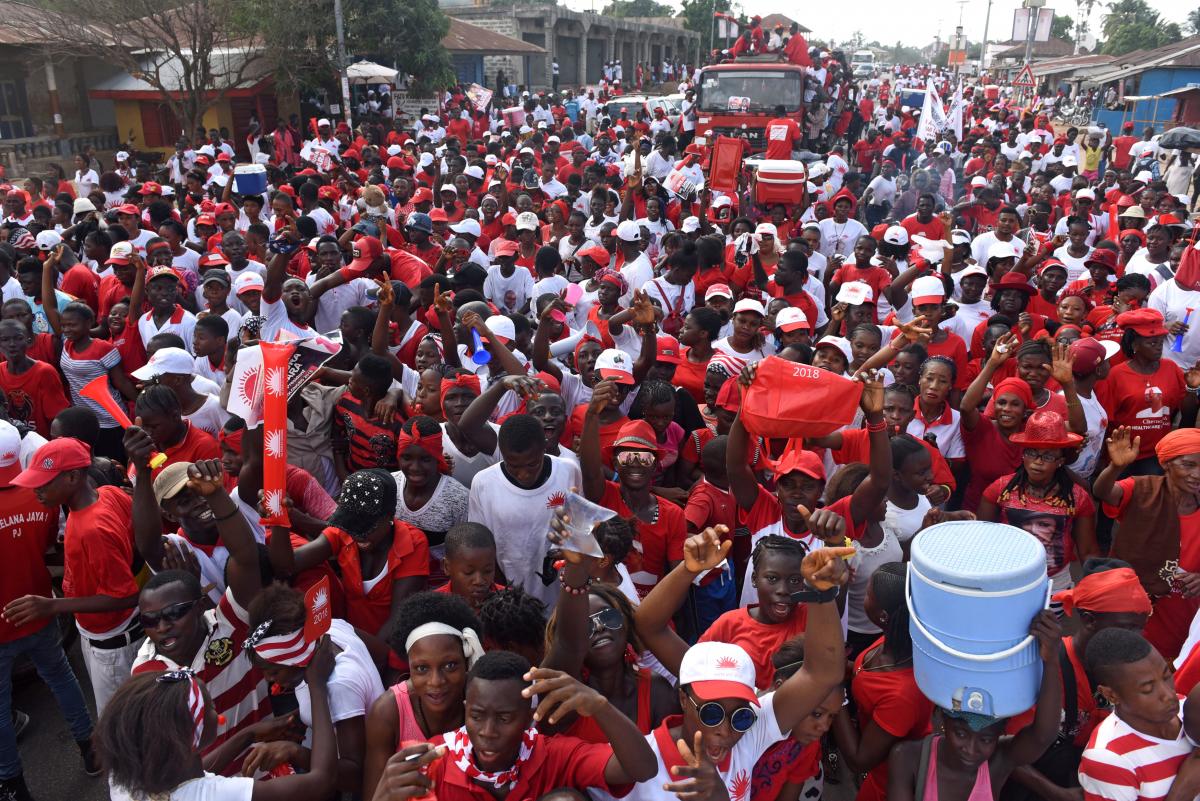 Judging by all that had gone before it, it was therefore not surprising that some wishful thinkers, and by extension some supposedly SLPP fans were expecting the worst. That’s why it’s hardly surprising that no sooner had the convention started than social media was flooded with video and voice clips about simultaneous violence taking place in Makeni. It proved to be false.  It turned out to be a political bazaar. Sadly, the closing song from some followers was littered with invectives (cuss cuss). The least said about that, the better. It is difficult to soar with eagles when you fly with crows.

The convention might have passed “successfully” but the Sam Sumana conundrum was also an added baggage. Many were wondering whether the return of the prodigal son would put the spanner in the works. The margin between Samura Kamara and President Bio in the runoff was not a landslide. Many still believe that Sam’s  decision to form the C4C for the 2018 elections was  significantly responsible for eroding the traditional support for APC in Kono land. How many APC members have forgiven him for that, is anyone’s guess? Is that why some conspiracy theorists are concluding that the recent clause, which stipulates that flagbearers must have been fully paid-up members for the last five years, is a deliberate ploy to three foot and rule out Sam Sumana from the race?

The convention was primarily to adopt the Draft Constitution, which required the intervention of the courts, “pursuant to an order dated the 4th August” and the supervision of the Political Parties Registration Commission (PPRC). Even that one came with a hazard warning from the PPRC that, “the internal organisation of a political party shall conform to democratic principles, and it aims, objectives, purposes and programmes shall not contravene, or be inconsistent with any provisions of this constitution”. If this is not a rebuke or indictment of the party’s selection process the last time, I don’t know what is.

But this is where the APC party interest seems to clash with the very idea of democratic principles. The APC members are traditionally renowned or notorious (take your pick) for putting the party above everything and everyone else. We witnessed the late Pa Sheki singlehandedly choose the late Brigadier Momoh to succeed him, unopposed. Despite strong opposition and equally adept competitors, Ernest Koroma was chosen to lead the party with gritted teeth from others. Members were by implication forced to put the interest of the party, in a show of unity at the expense of personal aspirations and democratic principles. And that is exactly what Ernest tried to do in 2018. The rest is history. “Some men change their party for the sake of their principles; others their principles for the sake of the party” (W. Churchill) 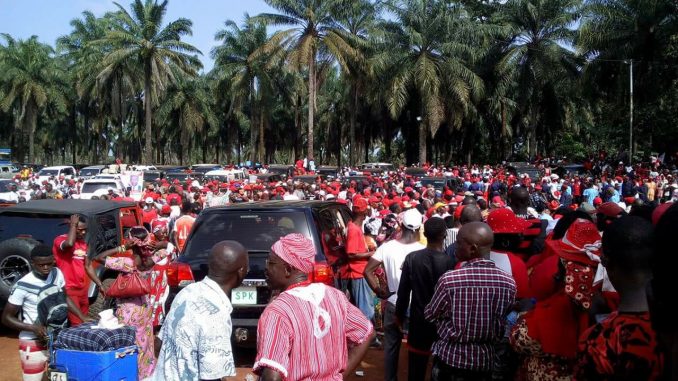 With the hazard warning from the PPRC and the courts, will the APC abandon its traditional selection process or adopt a democratically selected election of their flagbearers? Will the party choose a flagbearer with the winnability factor or go by the much-vaunted democratic process? Confused? Just wait. As for Ngor Mannah, he just went “PAOPA”, and it was “yain yain”. Strange things do happen in politics. Do you know that Donald Trump is the first Head of State to attempt a coup while still in power?

But if the convention was a success, has it left any unanswered unanswered? Has it conjured up more questions than answers? Or is the APC One Big family Again? So, what did our political sleuths take away from the convention? Ernest has been accused of calling his comrades “Munkus”. Irrespective of the intended interpretation or meaning, this was ill advised, unfortunate and not clever. Especially when you consider that “Munku boss pan matches” is a recent memory. Many have expressed their disapproval of this, and in the first of many twitter rants she promised to come, the High Priestess Sylvia Blyden has reportedly described Ernest as “ignorant” and called him a “hijacker”. Do you see or smell blood on the carpet?

So, now that the constitution has been adopted, perhaps the APC will turn to the serious business of choosing the flagbearers. There is no magic formula required for such an exercise. But if the APC is to stand any chance of renewing their tenancy agreement at State House, it will first need to put its house in order. In choosing their flagbearers, many would expect them to consider the winnability factor. But that is for the party stalwarts to deliberate on. I am not a politician, just a Democrat.

Irrespective of the outcome, it is of significant national interest that we have a viable opposition in our country. There can be no creation in the absence of an opposition. Just like with the SLPP, the country needs a vibrant APC to keep the government restrained from any alleged excesses.  By so doing, the parties would be expected do more for the country and our people, in their battle to win our hearts and minds; and that can only be good for the citizens, under “normal” circumstances. I don’t mean the one-off five-year cycle of one bag of rice, T-shirts and liquor. I mean things like good roads, electricity, Free education, free healthcare for lactating mothers, etc. But it should not be about “blind opposition to progress but opposition to blind progress.” This is not a post-mortem, but let the games begin.