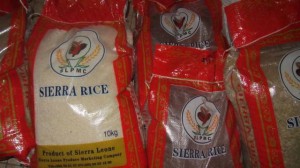 The locally produced but most expensive rice in Sierra Leone

“Good afternoon Simma!”  Ngo Musa, an old concomitant greeted me at Nyawa Junction, in front of the wreckage of late Brima Marrah’s house which was burnt down in Blama during the war. “How de body, Ngo Musa?” was the question that led me and the old man to an endless journey of privilege conversation after he answered: “Eh nor bad… pass de 4-for-4 nor mor".   “What do you mean?” I asked him curiously.  I have heard the same slogan during the past elections in the country as some lazy politicians exhaustively used it as a campaign message to the poor voters.    But this time round, the slogan comes from an illiterate man after elections are over barely  a year ago.  The man told me that this was the new name for hardship “unleashed upon me and family by the ruling APC”.  I later heard the same slogan over and again mainly from the youth in the opposition strongholds of Bo and Kenema, even in the barbers shops and fish markets.  But when I deepened my thought about the meaning of this slogan, my objective and critique nature never allowed me to accept it as a true message from president Koroma, because I never heard it from him and I knew it’s undemocratic and misleading.

So what does the 4-for-4 slogan really mean and how was it understood by the average voter during the last elections in the country?  It simply mean: “blindly vote for whosoever is bearing my symbol in your locality for the four vacant positions (councilor, mayoral, parliamentary and presidential) regardless their individual profiles”. Yes, this was the true meaning.

Certainly, if I were a registered voter during the past elections I should have casted my vote for Ernest Bai Koroma because theology thought me that “the voice of majority is the voice of God”.  SLPP and PMDC were already riddled of intra-party fracas and personality conflicts before going to the pool, a phenomenon that undermined their support even in their own strongholds.

However, as a patriotic citizen and pro-democracy campaigner who has a good vision for that poverty flagging nation, I have few questions for whosoever was, or still is, using the 4-for-4 slogan:  does this slogan portray any democratic value? Was it not undemocratic and unpatriotic to vote for all the bunch of candidates who represented the APC in every constituency regardless their individual profiles? Is it not a simple way of wooing the poor, gullible, illiterate voters to cast their votes for individual identities (ethnic, regional, personal interests) instead of viable, feasible and realistic policies?

With a great flabbergast, the same slogan appeared an hour ago in the facebook timeline of someone I don’t envy though, but I do held in high esteem, Dr. Sylvia Blyden. She wrote:

“The 4-4-4 Agenda continues under leadership of Ernest Bai Koroma, our popular Father of the Nation who, as I type, is currently relaxing up in his MAKENI hometown after visiting a few agricultural farms up the Northern Province today. This 'Farms for Business' photo shows beautifully processed and packaged rice (brown and white) GROWN, PROCESSED & PACKAGED IN SIERRA LEONE according to international standards by the SLPMC which bought the rice from local farmers. The highly nutritious "Sierra Rice" will soon be available in 5, 10, 25, and 50 kgs and prices will range between Le20, 000 Le 35,000 Le 85,000 and Le170, 000. Under the 4-4-4 agenda of the APC, commercializing the agricultural sector is no mere dream. It is for real and its happening NOW!!”

While few facebook fans clicked the “Like button” to glorify Dr. Blyden’s message, I received it as an excruciating pain down my spine as it revealed three undeniable facts that left me with few unanswered questions: 1) the 4-4-4 is president Koroma’s message, 2) The newly produced rice in Sierra Leone will be sold more expensive than the imported Chinese rice, 3) Presdeint Koroma is in Makeni today and he is aware of the price.

Now, if the 4-4-4 agenda is to grow rice in Sierra Leone and sell it more expensive that the imported Chinese rice, then what is the need to grow rice in the country? How many citizens can afford Le 170,000 for a bag of rice? Is the government not instigating the importers to sell their stock more expensive? Is Ngo Musa not right in his claim that the ruling APC has “unleashed hardship upon me and family”?

We now know that the 4-for-4 was not an ordinary campaign slogan but a real agenda introduced to the Sierra Leonean voters by no other a person but His Excellency Dr. Ernest Bai Koroma. How many agendas does the president has for his people then? I could recall that he began his first term with the attitudinal and behavioral change agenda; he ended it with the agenda for prosperity; he won the last election with the 4-4-4 agenda. So what is likely going to be the next agenda? A semi-third term agenda?  Reviewing the constitution to extend the current term by few years could be a clever way. Don’t you think so?

I was just thinking out of the box…