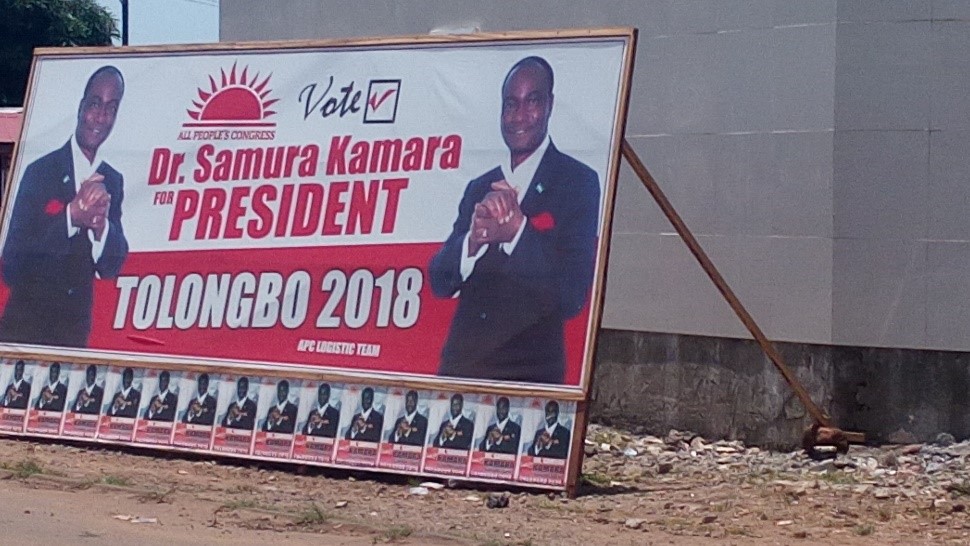 To millions of Sierra Leoneans in 2007, the All Peoples Congress party (APC) was a beacon of hope in post Tejan Kabbah governance. But more than a decade on, the party has been mired in countless corruption scandals and infighting, and now the once ruling party is in a passive opposition. What went wrong? Has the party lost its values? Is the party yearning for new leaders with visionary ideas? Does the party need another constitutional conference?

In 2007, the world watched as the All Peoples Congress led by erstwhile president Ernest Koroma swept into power with more than 50 percent of the vote. Led by veterans like late Serry Kamal, Kaloko, Eddie Turay, the party was viewed as a uniting force for the country, which had for decades been divided by party politics. The Tejan Kabbah government had recovered the country from a devastating war that nearly tore the country apart. There was mistrust, animosity and deep seated suspicion between the North and South and East and West respectively. To see an opposition attaining power from an incumbent was unheard of. The people of Sierra Leone voted the APC with high expectations and hopeful that the new era was at the doorsteps of the ordinary citizens.

More than a decade however, the All Peoples Congress bears little resemblance to the vision of the true patriots. Although it still commands widespread support in the north and western area, its reputation has been significantly tarnished over the years by numerous corruption scandals, economic mismanagement and frequent infighting. The APC was founded with the main goal of ensuring a level playing field for the ordinary people, with sustainable economic growth and empowerment as its focus. But alas, it seems to be fading speedily.

What really went wrong?  By mid 2017, discontent within the party was becoming apparent. In late 2017, Ernest was rumored to be life president of the party. Many party members were concerned about the party but remained quiet, for fear of been bullied and disgraced by the emerging autonomous power planted in the leadership. The ordinary people started talking about the leadership centralizing power around the Ernest presidency and how he seemed to be building an imperial presidency. Whether this was true or not, Ernest was becoming too powerful and more than the grass root supporters who gave him power.  The perception was that Ernest was taking too much power for himself. Unfortunately, there were no antidotes to this. All the intending flag bearer candidates never criticized this bad system. Rather, they pretended to be followers of Jesus Christ, loyal, humble and obedient. Even though allegations of corruption against the APC were already out in the open, no one was able to capitalize on this menace and correct the system. Ernest remained hero worshipped; a man who could do no wrong.

Ernest Koroma capitalized on his popularity within and outside the party. He emerged as a charming, charismatic and lovable personality during his presidency. Even though allegations of corruption were widely known, his popularity was always above 50 percent. He had the tenacity to quell simmering problems within his party, able to win sympathy from non-party supporters and his magical gimmick of including ‘outsiders’ from the other side into the APC with high positions; earning him a place in his party’s echelon. Ernest never saw the defeat of the party as a referendum on his rule, as he strongly believed that his popularity still reigns high. However, in recent times, he accepted the blame of the defeat as he was the custodian and leader of the party. A blame that is shared by many party supporters who strongly believe that as a leader, he gave many unfettered leverages to the opposition to clinch the presidency. To his credit, Ernest was good at romanticizing with members of the opposition more than his own party loyalists. He made many good friends on the other side of isle. Good fences make good neighbors.

So, should we blame Ernest Koroma for the downfall of the party? Or does the issue go further back? Or was Ernest just playing the role of a statesman by creating an equal and just society for whoever wins to occupy the seat of power? There is certainly a great deal of anger perpetuated at Ernest by die hard supporters of the party. Some consider him as a sellout, someone who, instead of making sure that his party retains power, rather created some bottlenecks for the succession battle which engulfed the party before the elections. Indeed, the party was fraught with succession imbroglio; itself a sign of disarray in the leadership, barring a political earthquake. Rightly or wrongly, many expect the elders of the party to steer the fate of the party when one man decides to hold the party to ransom. One may not be tempted to say, that the victory of the Sierra Leone Peoples Party has marked a political obituary for the party. Though the party may be “rotten in its entirety”, the APC party has the will power to rebound and claim victory in the next election, provided the party is in order.

The emergence of the NRM and its clarion call for reforms is gaining momentum every now and then. There are thousands of hard-core supporters clamoring for change, not necessarily the National Advisory Council (NAC), the highest executive body in the party but some changes to reflect the desires of millions of the party, including the selection process of the constitution. With Ernest out of power, the party has the opportunity to do some damage control with the APC before the next elections. Whoever replaces Ernest in the party will be charged with reversing both the economic rot and the extraordinary slide in the APC’s moral standing. There should be enough time for a new leader to lead the party into the next elections. There should be a national conference determining the depth of the party and its decline. The APC party has lost its traditional support in the east because of the emergence of the new Coalition for Change party (C4C). The party has also lost some of its overwhelming traditional support in the north because of the National Grand Coalition party led by Dr. Kandeh Yumkella.

Since the Sierra Leone Peoples Party came to power, there has been a drift in policymaking and national cohesion. The economy has not properly recovered from the 2016 financial crisis and, though no longer in technical recession, is still shrinking in per capita terms. More than one in five Sierra Leoneans is unemployed and business confidence is at its lowest. Notwithstanding, the free education program is a laudable gesture and a novelty. It is the hope of every Sierra Leonean that it succeeds as education is the only way a country achieve its goals.

Over to the APC, the clarion call for reforms within the party must be heeded and it must be considered as the lasting solutions to the myriad of problems besetting the party. There are millions of competent and dedicated servants who should now take the mantle of leadership and lead the party. Those who have served the party with diligence will be rewarded in the name of history and those on the wings of taking leadership should be given the responsibility and opportunity to manifest their potentials. The aspect of indispensability should be absent in the APC, as there are many competent members to take over the party; given the time and opportunity.

The APC may have lost the election, but there are competent servants that should be given the responsibility to reform and rebrand the party. Did I hear you say, APC Live for Ever? History will tell.