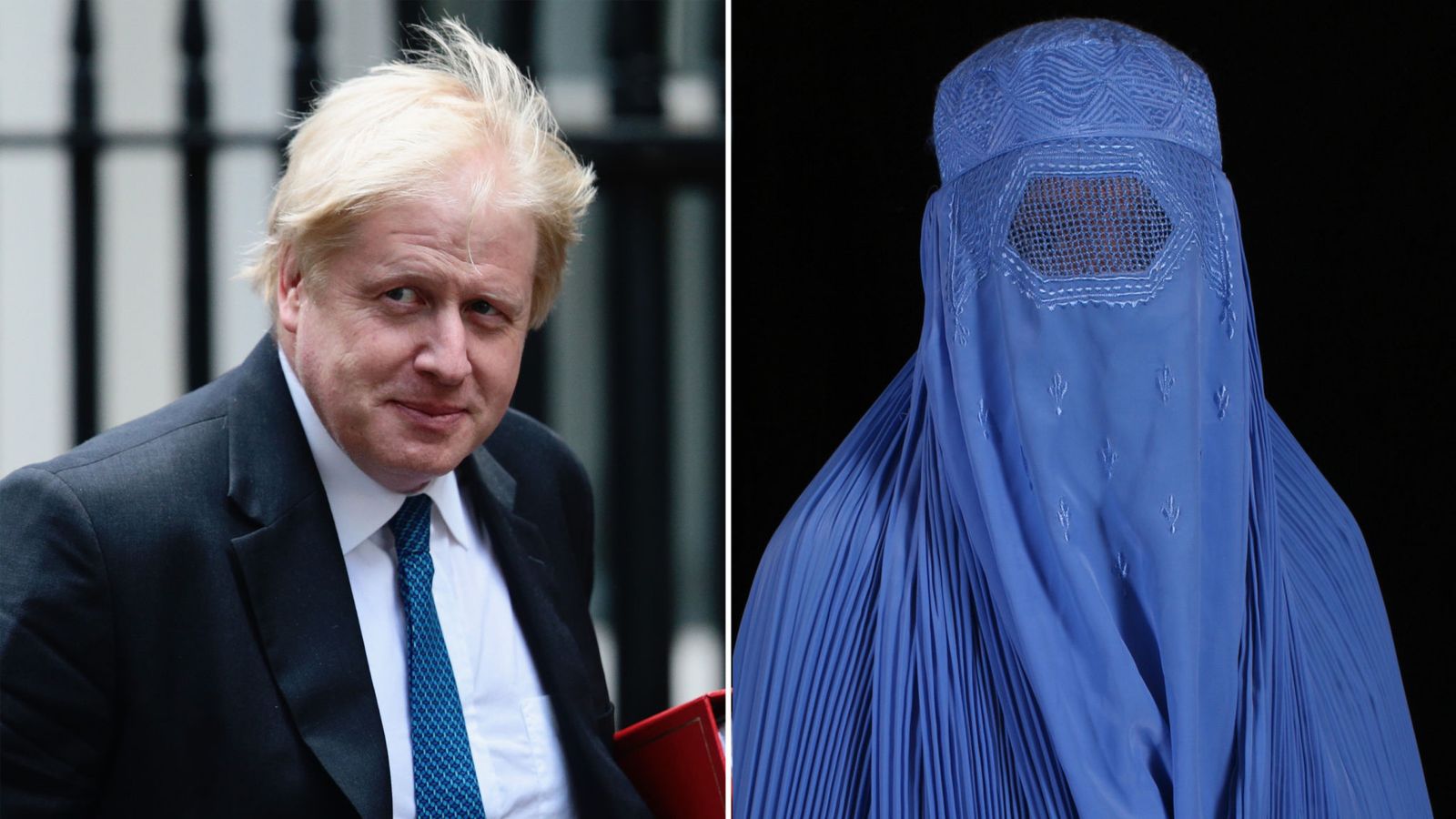 Boris Johnson, the former foreign secretary, UK said people in burkas looked like “letter boxes” or “bank robbers”. The criticisms that have greeted his remarks were obvious. The Equality and Human Rights Commission said his comments risked “vilifying Muslim women”. While many have seen his remarks as inflammatory and divisive”; and asking for an apology, others like the comedian Rowan Atkinson ( Mr Bean)  expressed support for Mr Johnson in a letter to the Times newspaper, saying “no apology is required” for ridiculing religion. Nevertheless, there are many people who would not be surprised by his remarks. Among his many attributes, if you can call it that, Boris Johnson is widely known as one of the disciples of the “Leave campaigners for Brexit. Together with Nigel Farage, Boris was instrumental in presenting the Brexit case as the best thing to happen to Britain since sliced bread. According to recent polls, many people are angling towards a second referendum on the Brexit plan, knowing what they know now.

When Brexit was sold to the people in 2016, many people were not aware of the serious implications that are inherent in the divorce proceedings. To most folks, it was just a matter of packing up and signing the Decree Nisi and Decree Absolute.  Many people were not aware of the commercial, social, security and political upheavals that it would entail. As many are now waking up to the details of the process, which had hitherto been sold on the premise of “we want to take back control of our borders”, it is becoming glaringly clear that the Brexit issue is not just about immigration; which was the main selling point of the “Leave apostles”.

Boris Johnson, the former foreign secretary resigned his post from Theresa May’s cabinet last month, and this was reportedly down to fundamental differences in the way that the Brexit negotiations were going. And as if to add insult to injury, Boris heaps a tirade of controversial comments about Muslim women. Why many people are surprised at this is any one’s guess. But for those who having been following the political footprints of Boris, there is little or no surprise there. You just have to look across the pond and see a pattern of behaviour emerging. Notwithstanding the fact that Boris has a canning resemblance to Donald Trump, both share similar hair stylist and colour.  It is an open secret that Boris had always longed for the leadership role in the conservative party. Is it surprising that Boris took a leaf out of Donald Trump’ playbook?

For starters, Boris and Trump share a similar passion for Brexit. When Donald Trump formally announced his candidacy on June 16, 2015, with a campaign rally and speech at Trump Tower in New York City, he drew attention to domestic issues such as illegal immigration, offshoring of American jobs, the U.S. national debt, and Islamic terrorism. Just like the Brexit case, immigration was ranked prominent as one of the basis of the arguments for the UK to leave Europe. But to make a case for his presidential bid, Trump characterised the Mexicans as “criminals, drug dealers, rapists, etc.”; as his stomping post for his presidential bid. It was not surprising that this seemed to appeal to his base. To all intents and purposes, Boris Johnson also needs a base, and it is not surprising that he has chosen religion, and the “burka” as his own staging post; for its controversial value.

There was a seeming rise of the far right in places like Hungary, Poland, and many parts of Central and Eastern European politics. Politicians like Marine Le Pen (France), Geert Wilders (Holland), Alexander Gauland (Germany) Sebastian Kurz (Austria) and many others have flirted with political prominence to mark the rise of the far right in European politics recently. Immigration and Islam have been used as nerve points in their campaigns. The Arab Spring which brought uprisings and wars across the Arab land saw an upsurge in immigration to Europe, as many were forced to flee their countries into Europe. With such mass migration from the Arab world, it was natural that these fleeing masses will include their religion in their luggage. This gave rise to a surge in the corresponding number of Muslims in Europe.

The spate of terrorism that followed in cases like the Charlie Hebdo attacks, the 7/7 bombing in London, the Bastille Day attacks in France etc., provided more fodder for the sermon of the far right.  With the rise of resentment, it is not surprising that “immigration and Islam” has become the staple diet of the campaign by far right groups. This has been drip fed to mark the corresponding ascendance of the far right in Europe; as a new dawn. But recent elections in Holland, France, and Germany have left a different reading on the political landscapes in Europe. Trumps success in America only exposed the underbelly of America, the land of milk and honey.

What many people may see as a one off statement may turn out to be just the beginning of his bid for Number 10. But that is where the similarities between Trump and Boris fizzle out. Unlike Boris, Trump was not a politician before he announced his presidential bid. That is why Trump stated from the off, his aversion for “political correctness”. Boris is a politician and as such, expected to be politically correct. Even though he may share similar aspirations with Donald trump, Boris may find himself tethered by the rudimentary gymnastics of political correctness; a “luxury” that Donald Trump did not have. Another problem with Boris’ tactics is that unlike America, Britain still has a high standard set on the morality scale. Donald Trump had a lot of baggage when he entered the fray to run for the White House.

The allegations ranged from money laundering, tax evasion, misogyny, sex, racism, etc. With such a baggage, and in addition to his political sermons, Trump would not have lasted a minute if he had bid for the tenancy at Number 10. The British public does not have the kind of appetite for such behaviours as shown in America, and his bid would have been dead in the water; even before his started. Remarks like those made about Muslim women by Boris are a normalised fixture in mainstream America. If Boris was banking on following the footsteps of Trump, he may have chosen the wrong setting. Unlike America, Britain has a long history of being a coloniser, hence its apparent superior understanding of race relations. Besides, Boris is too intelligent to be a politician.

What many people see as one of Boris Johnson’s usual controversial remarks would require a double take.  This is not one of those. This is a calculated attempt to tap into the emotional bank of some disaffected people, who have been led to believe that Islam is a dangerous religion in Britain. Boris needs a platform for his bid. Immigration and the NHS were conveniently used to make the case for Brexit. It is now becoming glaringly clear that Brexit entails more than the issue of Calais and Heathrow. The Brexiteers stated that the NHS will benefit from £350 million a week if Britain left Europe. The NHS is dear to the British public, and it is not surprising that many would have voted Brexit, partly for a better funded health service. Interestingly, because of the famous Brexit Bus pledge, Britain would need to spend £350 million more on the NHS than it is today, though not of course with money saved by leaving the EU. But ironically because of Brexit, you now can’t have one.”

The rumours that Boris left the cabinet last month in order to mount a leadership battle in the Conservative Party may just turn out to be true. Over the years, Boris has been linked to this leadership role each time the Tories suffered a political hiccup. When Theresa May appointed Boris as foreign secretary, many saw it as a ploy to keep him far away from Number 10. To Theresa May’s chagrin, Boris has always succeeded in making the headlines that bring her premiership into question. So as Boris continues to make a bee line for Number 10, it will be foolish for anyone to consider his latest outburst as the last of the Mohicans. This is just the beginning of the long road to Number 10. Whether the British public will have any appetite for a Donald Trump style of politics is anyone’s guess. Don’t hold your breath.