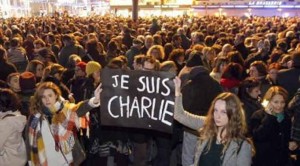 This is the kind of moral and ethical ingredients one would wish to see in society’s book of recipes to cook a very tasty dish of democracy. You would need to have the conscience of a chain saw and blood of steel coursing through your veins, not to reject the kind of brutish murders that took place on the streets of Paris and its environs. It is not surprising that the condemnation has been both viral and universal. The demonstration and show of support in Paris on Sunday, did not only put the One million Man Match in the shade, but invariably illustrated the deep rooted bolts and nuts that hold us together, and that the unity that courses across all the various veneers of society; irrespective of race, creed, sexuality, faith, sex, or bank balance is skin deep. It shows that when faced with a common enemy, the latent and inherent barriers collapse spectacularly.

This was not a matter of what happened in Paris, stays in Paris. When Sony nearly buckled under the threat of terrorism from North Korea, it took some intervention from the White House to stand up for “Freedom of Expression”. It was therefore not surprising that “Freedom of expression” was the flavour of the acceptance speeches at the Golden Globe Awards on Sunday. Judging by the show of support and defiance in equal measure, by far the largest demonstration in the history of France since the revolution; this was the world coming together to stand up against extremism. What happened in Paris has drawn a comparatively more vocal and universal response not only because of those involved, not because of the numbers; but largely because of the symbolic attack on one of the very fabrics of society: Freedom of Expression.

Freedom of Expression is one of the basic ingredients of Democracy, and Democracy is one of the most conventionally desired and palatable dishes on the menu of modern day societies. It is the matrix, the indispensable condition, of nearly every other form of freedom. To attack the Freedom of Speech was tantamount to an attack on Democracy. To attack Democracy was equal to attacking Society. It was not surprising that many saw Charlie Hebdo as that symbol of Society; a society which you would expect is built on Acceptance, Respect and Diversity, etc. But was that the case? Hmmmmmm. Let’s look at take Diversity as one of those sought after ingredients.

The concept of diversity encompasses acceptance and respect. Diversity can mean that each individual, group, tribe, language, etc. is unique and recognising our individual differences is what forms the bed rock of diversity. Others will say that diversity is a reality created by individuals and groups from a broad spectrum of demographic and philosophical differences. It is therefore extremely important to support and protect diversity, by valuing individuals and groups free from prejudice, and by fostering a climate where equity and mutual respect are intrinsic.

The last time I checked, the world has become one big jungle of a bio-diversely linked dots of humanity. What happened in Paris and its environs was pure tragedy; a tragedy that demonstrates how intolerable our world has become today; and it is that intolerance that has left us mere mortals trapped between the crevices of the extremists Far Rights and the Jihadists. With both sets dyed in their contorted beliefs in their racial and religious supremacies respectively, it is easy to see how they symbiotically provide manna to feed off each other; at the mercy of you and me.  What happened in Paris was a tragedy, but the main tragedy will depend on whether we allow these extremists on both fronts, to make capital out of this misfortune. But what hope is there for us mere mortals, when someone like the godfather of Newscorp, Rupert Murdock tweeted that” Maybe most Moslems peaceful, but until they recognize and destroy their growing jihadist cancer they must be held responsible. This is not a fight for any particular people, sect, creed, race etc. Jihadists have killed more Muslims than non-Muslims. That irony does not in any way justify the loss of any life; irrespective of their religious persuasion. But the Rupert Murdocks of this world should realise that this is everyone’s battle.

The journalists at Charlie Hebdo are rightly celebrated as martyrs and purveyors of the freedom of expression. “I do not agree with what you have to say, but I'll defend to the death your right to say it.” (Voltaire). You may not agree with me, but you should defend to death my right to make an ass of myself. Interestingly, one of the problems with defending free speech is you often have to defend people that you find to be outrageous, unpleasant and disgusting. But if we don't believe in freedom of expression for people we despise, we don't believe in it at all.

Many have lauded the writers at Charlie Hebdo as controversial, satirical and above all, provocateurs. Satirists and cartoonists have been known to breakdown the rungs on the social ladders, deflate the self-efficacy of the powerful and successful, expose the weakness and vanity of the proud, and in most cases knit the various social classes into one big communal orgy of laughter. Satire is traditionally the weapon of the powerless against the powerful. In the dreary world that we live in today, there can be no better outlet, aphrodisiac and escape route than the nib of a satirist.  Satirist will always remind us that we need to laugh in spite of the daily drudgery and skulduggery of the world today.

But equally, there is a place in this world for satire, and there is a time when satire ends and intolerance and bigotry towards religious beliefs of others begins. It is ironic that Catholic or Islamic views on homosexuality are seen as hate crimes but ridiculing the Prophet Muhammad (SAW) is an act of literary masterpiece. Has satire in this case become a sort of glass, wherein the beholders generally discover everybody's face but their own? Is it time for us to put our head above the parapet and accept that Charlie Hebdo traded in deliberately offensive humour?  Freedom of expression comes with responsibilities, especially when it comes with serious implications for peace.

By demonstrating our right to Freedom of Expression, did they jump over the boundaries and provide these extremists with an excuse for barbarism; and by so doing, did they just give the Far Right and the Marie Le Pens of this world, a “get out of Jail Card”?  What and who was Charlie Hebdo actually trying to provoke in their expression of their Freedom of Expression? Was journalism being whittled away by a Wall Street theory that profits can be maximized by minimizing the product? If we peel off the top layer from the veneers of satire and free speech, what could we say was the main purpose of satirising the beliefs and creeds of other people?

Being controversial can open up healthy debates, conjure up discussions and engage a whole lot of views. I am sure that after the emotional jamboree, and in the cold light of day, many would be wondering whether ridiculing  other people’s  religious beliefs was an advert for free expression or a lack of respect for people of different creeds and faiths.  But how far are we ready to see the wood for the trees, is what has become the hot potato for the moralists and custodians of society’s norms today. In a society where some people are increasingly becoming incapable of multiple viewpoints, it is becoming increasingly difficult, when those limited viewpoints are held in unshakeable reverence. The world today is faced with a balancing act; to maintain our Freedom of Speech within a diverse and democratic society that is built on tolerance, respect, and egalite. In a world that is crying out for diversity, civility and respect, there is a difference between provocateurs and insulters; for they have become strange bedfellows to those that are a little bankrupt on the creative and challenging aspects of society.

The world is now faced with the balancing acts of promoting and protecting the rights of the individual within a society, whose very foundations are increasingly being threatened by the merchants of terror. We will look to our leaders to protect us, and our security forces will need all the legal, moral, technological and ethical apparatus to do their job. Can the security forces protect our rights and deliver the security we need, without trampling on the very rights of the individual that is meant to be protected? Is it time we woke up to the reality that in order to remain secure in the world we live today, we may need to give up some of those rights that have differentiated us and them? Will this be a battle between the rights of the individual vs the greater right and good for society? At what price? If we breakdown all those building blocks of our free and democratic societies; who will be the real winners in this fight?  “Sometimes a people lose their right to remain silent when pressured to remain silent.”

Asked whether he was moved by the vast unity rally on Sunday, Luz, a surviving Charlie Hebdo cartoonist said his favourite moment was when a pigeon defecated on the shoulder of the French president, François Hollande, as he addressed the team. Sometimes, you can’t help but love these guys.

If I go missing for expressing my right to make an ass of myself, don’t forget to turn the lights out when you leave the room.