Latest headlines
Monday, 22nd July 2013 added another day to the countless sad days that makes the Sierra Leonean calendar, as some extortionist and misguided citizens dressed in the noble uniforms of the police force of our beloved republic, arrested me for no crime after I refused to bribe them.

It all began after one of my staff phoned me from the nearest marketing center where I had assigned her to shopping for the launching occasion of “Youth Sensitization Campaign against Ethnic Voting, Religious and Cultural Discrimination” project, which was scheduled to take place on the following day (23-07-2013).  As a courtesy in any part of the world, I pulled off the main road and parked on the pavement in front of the Sierra Leone Commercial Bank at Hangha Road in central Kenema, before answering the call. One of the shameless extorters (name and number withheld) who is now dressed in the country’s noble uniform approached me with tentative smile in his face and asked for my license.  After he inspected my license and found it strange, he called a fellow officer to help him identify it.  After they realized that it was a European license, they walked away for a while and circumvented again with a fresh allegation: “driving without wearing a safety belt”.  I agreed with them that indeed I had previously driven my vehicle without wearing a safety belt, but in normal traffic law, an offence can only become a crime when the driver is caught in the process.  Therefore, they had no right to arrest me for crimes they hadn’t seen me committing.

I ducked my hands into my pocket as if I was going to take out some Leones, as it usually happen in many cases, I could see some evidence of smile in their faces; instead, I told them the unexpected words: “if you think I have committed any crime, you have the power to charge me to court, but I swear to Jesus, you’re not going to get a cent from me”, I told them affirmatively with a sharp laughter. 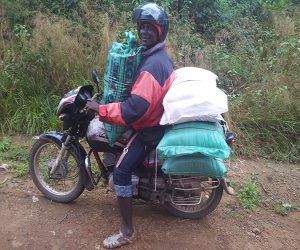 They then felt annoyed and began shouting “den le we go na station, le we go na station!” They then attempted to force their ways into my vehicle as they usually do with passenger vehicles. “You know what?” I went further, “there is no paragraph in the Sierra Leonean traffic law that the driver should be responsible to take the police to the nearest station when caught for traffic offences.  Therefore, none of you is going to be allowed access into this vehicle; see you in the station then”, I told them. They then decided to take the law into their own hands by blocking my way. It became a serious issue, this time round, I have driven the vehicle to Maxwell Kobe Street, just next to the police station. Angry youth began exchanging vindictive with them. I asked the youth to remain calm.  I drove the vehicle into the station where I was quickly charged for driving without wearing seat-belt and then brought in front of Magistrate Alhaji Momoh Jah Stevens.

Questions and answers made it quickly clear to the magistrate that the police were not only trying to extort money from me but they were also unprofessional in drawing their charges against me.  If they were really interested in enforcing traffic rules why did they charge me for driving without wearing a seat-belt forgetting about telephoning during driving hence both crimes were supposedly committed simultaneously given the scenario under review? I was then discharged upon warning.

This is not the first time the police have made unsuccessful attempts to extort money from me for unfounded traffic offences. I would rather prefer to pay into the government coffer, no matter how much it is.  While I remain law abiding in all my undertakings, I’m also aware of the fact that bribing the police in the street encourages them to let go dangerous criminals in exchange of the same. 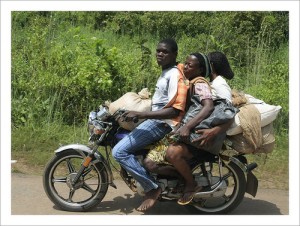 It must be noted that the Kenema police division tops the list of corruption in the interiors. As far as they are concerned, laws regulated in Freetown and implemented in other parts of the country are meaningless in their own territory.  Okada riders don’t wear helmets; most of their bikes are uninsured and unlicensed simply because they belong to police officers; they load all sort of dangerous goods on their bikes; they back two or more people in front of the police and are let free when they hit innocent pedestrians. Oh my God! To wear a seat-belt during driving is a strange act in Kenema since the police don’t even count it as a crime, because 99.9% of passenger vehicles running in the interiors don’t even have such belts.

When I asked one of the authorities: don’t you think disturbing some of us is like running after a toothless sand-shark while the hammerhead roams free?, “our job is discretional” he answered unpatriotically.  This simply mean that the police can only arrest when they want to and let go who they want to. Is this a “force for good”?