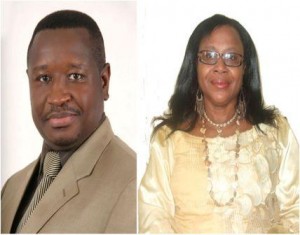 It was one of those nights when people were genuinely said to let their hair down. It had started to rain earlier in the evening, but rather than being an inhibition, people were simply galvanised into rushing to the KLM Centre, the venue for the reception hosted in honour of the SLPP Flag Bearer, Rtd. Brigadier Julius Maada Bio. This was the night when people who had lost contact with each other in the UK met, as there were those who came from places like Manchester, Leeds, Bristol, Birmingham, Oxford, Reading, Cambridge, etc, to party with Bio. Even before Bio arrived, people were already in a jubilant mood, dancing to the rendition of Markondoh how u fine so.

It is one of those tunes that one tends to appreciate not only the facial beauty of an African woman, but admire the intricate gyrations of their hips! By the time the SLPP Flag Bearer entered the hall, he was simply enveloped by the ladies, with the men folk forming an outer protective ring, there was no way an APC grenade launcher could penetrate such defences. In addition to Sierra Leoneans, there were also other people who attended the function, people who describe themselves as friends of Sierra Leone, including those from the British political establishment. One of those prominent figures who attended the reception was the British Member of Parliament for Southwark and Bermondsey, Mr Simon Hughes. Incidentally, Mr Hughes is the Deputy leader of the Liberal Democrats. The Liberal Democrats are partners in the current coalition government in the UK.

In his address at the reception last night, Mr Simon Hughes praised Sierra Leoneans for their friendly disposition, and lamented the war years which brought pains and suffering to the people. Mr Hughes argued that the war had been possible because of lack of democracy, and promised that as friends of Sierra Leone, Britain will continue to work for democracy for the West African state. Apart from the partying, there was also another serious side to Bio’s visit when he addressed his audience. The SLPP Flag Bearer was effusive in his praise for the UK Branch for overcoming their internal differences. He thanked the Branch for the contributions they have been making and encouraged them to continue. Rtd Brigadier Bio said Diaspora Branches are no longer appendages of the party, they are considered as part of the collective whole.

The Flag Bearer said what took place in the UK was typical of the internal party democracy, which he says “is usually a vigorous one, perhaps very vigorous, but that the party always has the capacity to close ranks to work towards the bigger picture”.Rtd Brigadier Bio told his audience that what was taking place in the country was unacceptable, and argued that Sierra Leoneans deserved better. He said there was a clarion call for a new direction in which Sierra Leoneans will have the opportunity to sit at the table, instead of settling for bread crumbs. The SLPP Presidential candidate stressed that there was a huge potential in unlocking the creative talents of the youths in order for them to assume the responsibility of becoming not only responsible leaders of the next generation, but for them to become full participants in rebuilding the country today after the disaster of the last five years.

In a swipe at the recent clandestine arms shipment into the country by the APC, the SLPP Presidential candidate warned that no muster of any type of weaponry will impede the march of a people who are determined to rid themselves of an incompetent and divisive government.Rtd Brigadier Bio further told his audience that what happens in Sierra Leone has an impact to the outside world especially our development partners. He said it was with this in mind that he thought it wise to honour an invitation from the Royal institute of International Affairs at Chatham House in order for him to argue the case for his vision for Sierra Leone. Rtd Brigadier Bio said Sierra Leone and the UK have historic ties, and as a key development partner, the SLPP as a government in waiting had a responsibility to present a narrative about not only what is going wrong in the country, but also, for the party to present an alternative program that will point to a direction that will avert the re-creation of the conditions by the APC that not only undermined and destroyed all state institutions and eventually led to the collapse of the state.

The SLPP Flag Bearer who is on a week long tour of visit in the UK attended a Church Service this morning at the Walworth Road Methodist Church in South London. Rtd Brigadier Bio will be in Reading tomorrow on a sensitisation to the Sierra Leonean community in that part of the UK.