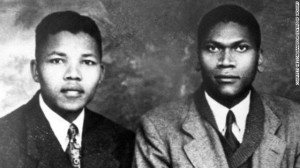 The frail icon has not appeared in public for years, but he is celebrated worldwide on his birthday for his role in reconciling a country torn apart by apartheid.

In South Africa, citizens performed at least 67 minutes of public service on his birthday, a reference to the number of years he devoted to helping others.

In Mandela's childhood village of Qunu, relatives, including children and grandchildren, gathered to mark his birthday and perform community service at the local health centers.

The family will get together for a meal that will include a champagne toast — which the ailing Mandela cannot partake in — and his favorite dish of tripe, a meat delicacy.

A day before his birthday, former U.S. President Bill Clinton and his daughter, Chelsea, had lunch with Mandela in the small southeastern village where he grew up and spends most of his time.

A quiet but smiling Mandela, wearing a beige cardigan in the cool temperatures, sat at the head of the table as he shared a meal with the Clintons on Tuesday. A picture of the two leaders walking down a dusty path with their arms around each other sat nearby.

Clinton, whose presidential term coincided with Mandela's, hailed him as a "wonderful friend" and planted a tree in his honor during the visit.

"He didn't call me a single time, not once, when he didn't ask about Hillary (Clinton) and Chelsea," Clinton said of their conversations during their time in office. "If it wasn't too late, he'd ask me to go get Chelsea, bring her to the phone, ask about her homework." Clinton said the anti-apartheid icon never lost touch with his humanity.

"I saw in him something that I try not to lose in myself, which is no matter how much responsibility you have, he remembered you were a person first," he said.

In addition to public service, South Africans held various activities to honor a man credited with helping bring together a nation deeply divided by apartheid. About 14 million students sang "Happy Birthday" in unison nationwide before they started their lessons.

U.S. President Barack Obama and his wife, Michelle, described him as committed to democracy, saying his accomplishments changed South Africa and the world.

"Nelson Mandela's personal story is one of unbreakable will, unwavering integrity, and abiding humility," Obama said in a statement. "… By any measure, Nelson Mandela has changed the arc of history, transforming his country, continent and the world."

Mandela, a Nobel peace laureate, spent 27 years in prison for fighting against oppression of minorities in South Africa. He became the nation's first black president in 1994, four years after he was freed from prison.

Despite his rare appearances, Mandela retains his popularity and is considered a hero of democracy in the nation.

The former president has not appeared in public since the 2010 World Cup held in South Africa. He spends his time resting and gets round-the-clock care after abdominal surgery this year and a bout with an acute respiratory infection the year before.

The United Nations designated July 18 as Mandela Day in 2009.