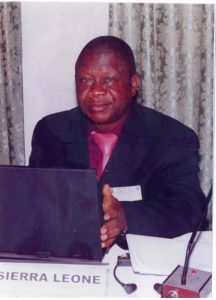 When, on invitation, I agreed to receive postings from Face book friends on the discussion forum titled “Sierra Leone Issues” I did so with the hope that I was going to be part of a forum committed to a decent and matured discussion of issues fundamentally germane/pertinent to addressing the core challenges to our existence as a nation. I was particularly looking forward to engaging in an intellectual discourse on the topical issue of the challenges to political succession within a milieu where multiparty capitalist democracy is practiced against a background of extreme poverty & want as well as a high level of illiteracy. This is because I am becoming over-concerned about what I perceive as the rearing of the ugly head of ethnic, hegemonial and other forms of primordial jingoism.

As an educationist I was also looking forward to discourse on all matters related to education and how this informs the addressing of the challenges mentioned earlier. In fact I had already started preparing a response to Mr. Solomon Peter Gbanie’s concern about the Professor Gbamanja Commission’s inspired misguided government prescription that there shall be no West African Senior Secondary School Certificate Examination for ALL school candidates (including even those private and some public schools that have no problems with teacher-to-pupil contact hours – the apparent basis/genesis of the prescription) in Sierra Leone next year, 2013. But then I got stopped in my tracts by the outpouring/avalanche of a clearly one-sided political propaganda on behalf of the governing All Peoples Congress party by Dr. Sylvia Blyden.

Almost all her postings have been either straightforward praise-singing of President Ernest Bai Koroma and his APC and/or outright condemnation and vilification of Rtd Brigadier General Maada Bio – the flag-bearer of the opposition Sierra Leone Peoples Party. I happen to believe that this too much grovelling and blind praise-singing is one of those factors that convert/transform human beings into tin-gods; just as blind criticisms are those that unfairly stigmatize and demonise others thereby distorting the views of those members of our society that depend on us charged to be opinion leaders. It becomes even more disturbing/unpalatable when such writing is informed by rewards in terms of personal aggrandisement. The spontaneous impact of Dr. Blyden’s postings was that my delete button went into overdrive; at some point I almost attempted to have all her postings filtered into my spam folder.

Perhaps it is worth noting here that the lessons I acquired from the schools I attended cannot permit me to connect with the logic that one person (Dr. Ernest Bai Koroma) and one outfit (the APC) can be so perfect that there can be no element of imperfection associated with them, while another person (Rtd. Brigadier Maada Bio) and his SLPP outfit can be so imperfect that there can nothing good about them. Dr. Blyden, this is just not realistic!!!!

Does Dr. Blyden want to force some of us to start throwing up some of the injustices and unfair treatments we have suffered under the regime of her newly anointed patron saint, EBK? Including, in my case, the unfair manner I was hounded out of the Board of the Environment Protection Agency by a weak and insecure Chairperson with very strong links with State House? And the recent caricature of an assessment/review of my stewardship by the previous Court of the University of Sierra Leone which was used as a smokescreen to unfairly tarnish and blot my professional image that I have painstakingly built over the years and subsequently used to deny me a 2nd term because I could not play political ball?

I was of the opinion that my friend Dr. Blyden was learned enough to know that no one is perfect, including yours truly, …. and including herself! We are all sinful and have sinned! That was why when Jesus Christ asked the one among those self appointed judges who were about to sentence that poor harlot to death by stoning to be the first to throw the stone if they had no sin, no one dared! Yes, Maada Bio had sinned, but then so have we all! Mark you, Dr. Blyden, of all the sins catalogued in the 10 Commandments (including murder, adultery/fornication, telling lies, stealing, coveting, etc.) none is greater or smaller than the others. Even so, in my human frailty, I am tempted to posit that murdering a sacred institution such as TRUTH (a sin that most of us are guilty of) is more of a fundamental sin than being part of a heterogeneous system that shot people in poor judgement, and then becoming remorseful and apologising. This is why I wonder why Dr. Blyden keeps harping about the sins of Maada Bio as if he is the only sinner in Sierra Leone.

Does Dr. Blyden not realise that the world (including Sierra Leone) has been sanitised and has moved on so much that certain events that took place 10, 20, or more years ago will no longer be allowed to happen today? Does she know that even if Adolf Hitler were to return and be made Chancellor of Germany he will not be allowed the space to commit any of the crimes he is accused of? Coming home, that if Siaka Probyn Stevens were to return and be made President of modern Sierra Leone the current vigilant political and social milieu will not allow him to take this country for the ride he took it and do the hideous things he is known to have done?

For good measure, were the NPRC to return today – I know this is an impossibility, for as long as the democratic process remains on course in our country such that political succession is not stolen but allowed as per the free expression of the will of the people, there will be no excuse, reason or need for “an NPRC” to return. However, just for the sake of tidying up this logic by extrapolating this argument, were the NPRC of Valentine Strasser, SAJ Musa, Maada Bio, Idriss Kamara, Mondeh, et al. were to return today they will never be allowed to do the wrong that they did ….including those executions that Br. Blyden keeps harping about in spite of a conclusive TRC process. In the same vein, were my distant uncle James Bambay Kamara (to whose home on Lightfoot Boston Road, off Wilkinson Road, I was an occasional visitor) were to return today and occupy any of the high positions he held (including Head of CID and Inspector General of the SLP), the existing institutional structures will not allow him to do the things he did that made him attract the loathsome and unenviable profile he had.

So Dr. Blyden why can’t we drop this mostly poorly researched and out-of-context story telling that may not stand up to serious/rigorous peer scrutiny and instead look ahead with a view to carve a decent nation out of this our currently sorry enterprise called Sierra Leone.

Granted President Koroma’s government has scored fabulously on the healthcare and infrastructure fronts, although on the energy front the returns/dividends do not yet seem to match the huge investments.

However, for me the far more worrying development is the unprecedented level of polarisation and divisiveness that our tiny country is being subjected to as part of a seemingly carefully orchestrated regime to intimidate, cover and tame an awakening populace into political submission in order to allow the current political class to have their way by continuing to plunder our wealth. The modus operandi is the politicisation of all state and even semi-state institutions; even those once accepted to be sacred national institutions, like the university, have not been spared! If one doesn’t acquiesce and dance to the current political tune one must be marginalised, discredited and chocked to economic death!

This, I’m afraid, has the potential to balkanise this tiny country of ours with so much interlinkages that by right should be so cohesive as to be one mega family. In my case all of my educational apprenticeships took place within multi ethnic and multicultural environments – thanks to the American, Catholic and CMS (Church Missionary Society) missionaries. Thus my social and friendship orbits cut across all barriers so that I have friends from virtually all ethnic groups and regions as well as from all religious, gender, economic, etc. classes in Sierra Leone. However, I notice with much pains lately, that some people with whom I have been friends for the past 20-30 years have suddenly become cold, giving me the impression that some of these long-term friends  have started editing their social orbits according to the dictates of the current negative political climate. Such developments are those we must be fighting to eradicate in our society!

Those wishing to engage me in a fruitful discussion along these lines are free to contact me via my eaddress: tom_yormah@yaho.com