Latest headlines
I ignored the buzzy melody of my Samsung Galaxy SII by 6:00 a.m German time. I thought it was one of the usual irritating calls from some of my relatives in Sierra Leone who normally gage calls with their thumbs against the “stop” button in order to make it possible without paying for it. The phone rang again after half an hour; this time round, it rang more than three times signifying the caller’s willingness to burn some airtimes.  “Perhaps this is uncle Lansana, Hanna or Camanda, the few relatives who can phone me once in a while without deliberately cutting the line”, I murmured while stretching my left arm to reach for the phone.  I then saw +971… at the visual screen, meaning a call from the United Arab Emirate (UAE).  It went off before I pressed the “yes” button.   I dialed back with hesitation, but the calm and diplomatic tone of the answerer told me that I was talking to someone serious.  Indeed he was. It was the voice of the External Relations Director of an Emirati based charity I had earlier contacted for a possible collaboration in some areas of my development ventures in Malegohun, Nyawa and Nogowa chiefdoms in Kenema District, eastern Sierra Leone.  The discussion went on evenly and at last, it necessitated my urgent visit to the Emirati business capital of Dubai.  I was there for a period of two weeks.
I landed in Abu Dhabi at 7:30 in the morning since there was no direct flight from Berlin to Dubai.  I could see the entrance/exit gates being manned by young men in white gowns with white turbans on the heads.  I’m told that all the Emirati scientific and technological industries including the oil dams are handled by foreign workers, mainly Asians. But the country’s main entrance/exit gate was seemed to be managed by the Arabs themselves.
“Wherr rar you from?”  asked the immigration officer while scanning my passport for a third time.  “I come from Germany” I replied.  “Wherr is dhe fizza” he asked with a real sign of suspicion in his face.  “Do I need one?” I answered sarcastically.  He quickly left his seat to consult his colleague on the next table and I could hear him saying the Arabic word “beduni ta ashir, meaning “without visa”.  After a brief discussion to themselves he came back to his table with a tentative smile on the lips and said: “Sorri, I just wanted tu be shorr you rrer fizza ferree”.  He returned to me my passport and opened the gate quietly. 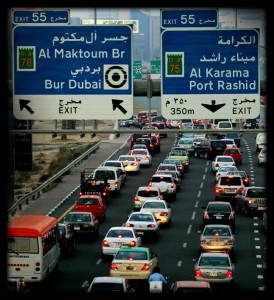 While walking through the exit door, I saw a Red Indian with an A4 size placard written on it in capital letters “Othman Sheriff” which triggered my mind that the placard displayer might be a messenger/driver sent by the Grandeur Hotel, which I had booked prior to my departure.  I was right. The drive from Abu Dhabi to Dubai lasted about 90 Minutes, the distance is 150 kilometers.
While relaxing in my hotel suite at night, I came across a discussion program on the state television under the theme “Emirati citizenship”.  The gist I gathered was that the Emirati government was considering granting its citizenship to children born to or by Emirati citizens who are married to foreign immigrants. This answered the question why the new immigration recruit had qestioned my identity  at the airport.  He didn’t know that though his country is one of the world’s fast growing economy, his government is 1000 miles far from the Europeans in terms of immigration policy. I didn’t blame him because modern immigration policies such as granting resident permits to immigrants due to number of years they have spent in a country, educational level, number of years of taxable jobs they have done in the country, asylum or humanitarian refuge, intermarriage etc. are still farfetched dreams in the gulf region.
The Grandeur Hotel is located in the Al-Bashar District, few yards from the Emirate Mall, off Sheik Zaid Road. The hospitality, courtesy and service rendered by the staff makes it worth the price. The continental breakfast, which was also included in my hotel bill, was second to what I had two years ago at the Hotel Marriot of Avenue des Champs-Elysees, Paris – France.  As it’s often the case in the entire Emirate, the hotel is basically managed by foreigners, while the actual owner who was said to be an Arab, is resident in neighboring Oman.  Yes, my time at the Grandeur Hotel was a great experience. 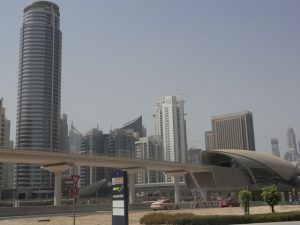 Osman Kamara, a Sierra Leonean brother resident in Dubai, took me on the following day for sightseeing. The weather was about 45 – 50 degree, the highest I ever experienced in the past ten years. Walking in the streets of Dubai was like sitting in a Sauna. I almost collapsed while walking from the metro station to the nearest taxi lot.  I then hired a car to save myself from being grilled. The cost of 1 liter petrol in Germany can afford 3 liters in Dubai.  Whoever drives in Freetown can perfectly drive in Dubai.  The only major differences are the perfect condition of the roads and traffic lights which, unfortunately, are missing in Freetown.  Same like Freetown, Dubai is overcrowded by public transports, mainly taxis driven by Indians and Pakistanis whose desperate quest for money often lead them to overtake other road users in roundabouts, curves and bridges.  With the Freetownean skill in me, it took me few hours to adapt; I was perfect on the following day.
While food stuff tops the list of cheap things in the country, the cost of accommodation makes it difficult for a hustler to survive in Dubai. The city is densely populated with more than 2 million of the country’s 5,314,317 official residents.  This explains why it’s sensible for the government to construct skyscrapers as investment strategy in the tourism sector.  Most of the skyscrapers are either hotels or dwelling apartments.
Osman shares his single room with three roommates and they are paying 2500 Emirati Dirham (about USD 550) monthly. Those who go online or read books, does so in their beds. The tiny apartment has no guestroom; the kitchen and toilet are substandard and extremely narrow. Yet, they are thankful to the landlord for granting them the cheapest accommodation in the economically prosperous city of Dubai.
I visited many important parts and landmarks of the city including the main business district of Deira, Sharja,  Sinaiya, Jumairah etc. The country’s development and transformation ambition has culminated over the years into the creation of countless beautiful infrastructures that the Emiratis shall be ever proud of.  These include but not limited to the world best driverless train which runs 24/7 across the city; the world tallest skyscraper (Burj Khalifa) which is 828m tall with the world fastest elevator; the world largest manmade island (Palm Jumeirah) which is in the shape of a palm tree. It consists of a trunk, a crown with 16 fronds, and a surrounding crescent island, 5 kilometers long and 5 kilometers wide.  The shopping malls are the same like European shopping centers. The only things I missed during my stay were my family and the cold weather.
What I found rather flabbergasting however, were the commercial sex workers who pursued men at night in the business district of Deira, and the dozens of alcohol bottles found in the fridge in my hotel suite.  Both prostitution and alcohol are religiously and constitutionally prohibited in the Emirate but they seemed to be some of the secret factors that are magnetizing tourists from many neighboring states including the holy land of Saudi Arabia.  According to statistics, 76 per cent of the country’s population are male thereby making Dubai the most ideal place for commercial sex in the gulf region. And what I knew, for sure, was that the sizable fridge which was overloaded with unsolicited alcohol wasn’t available in my room alone; every suite has one… even in this holy month of Ramadan…