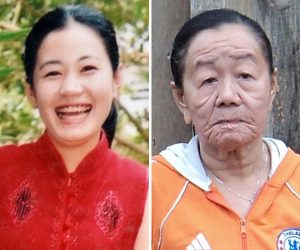 A 26-year-old Vietnamese woman has left doctors baffled as she lost her once youthful appearance.

Nguyen Thi Phuong believes that an allergic reaction to seafood she ate in 2008, caused the skin over her face and body to sag and wrinkle. It has come to light now, as she has shown her face in public for the first time since it happened.

Her story has led health experts to question what could have triggered her rapid aging as pictures show Phuong looking like two different people.

Mrs Nguyen had been treating herself with various types of medication, from a local pharmacy as she and her husband could not afford to have her examined at a hospital.

She said: “I was really itchy all over my body. I had to scratch even while sleeping. After one month of taking the drugs, I became less itchy but hives remained on my skin.

[See also: Woman is so bloated after eating people think she is pregnant]

“Then I switched to traditional medicine and all the hives disappeared, together with my itching. However, my skin began to sag and fold.”

The couple does not remember what the traditional medication was called, or which pharmacy they had bought it from.

In 2009 they decided to stop using the remedy; from then on Phuong wore a face mask whenever she was in public.

She said: “The skin on my face, chest and belly has folds like an old woman who has given birth several times although I have never had a child.

Phuong’s husband, Thanh Tuyen, insists her story is true and continues to stand by his wife despite the loss of her youthful appearance.

Tuyen said: “I married Phuong when she was a beautiful woman. I have followed her through her disease and have never been shocked at all.

“It’s not easy to talk about one’s own marital affairs. Just simply understand that I still love her very much.”

Mrs Nguyen has not had much luck treating her condition but there still may be a happy ending.

Phuong was able to have a free consultation at the Ho Chi Minh City Medicine and Pharmacy University Hospital, in Vietnam, with doctors who believed she may have been badly affected with the skin disease, mastocytosis.

From this diagnosis, doctors hope that with medical treatment they will be able to restore between 50 and 70% of her skin.